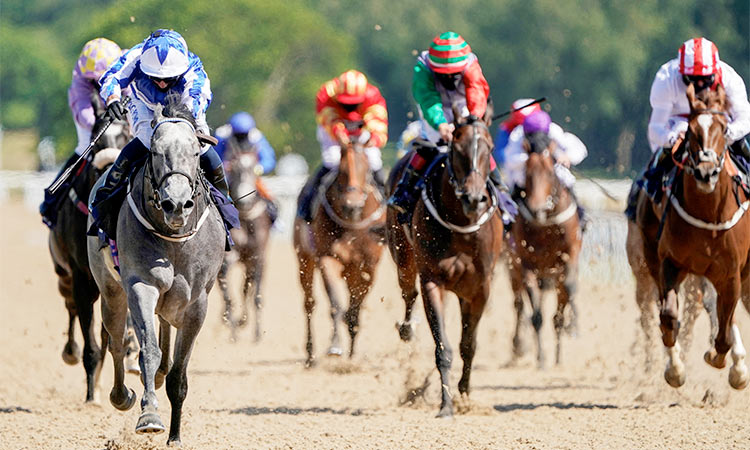 Horses in action during The Betway Novice Stakes (Div II) at Newcastle Racecourse on Monday. Agencies

Sport has been shut down since March but the British government on Saturday approved the return of domestic competitive action behind closed doors from June 1.

Premier League football is scheduled to resume on June 17, while cricket chiefs still hope to stage a full international programme during the English summer.

Racing has a head start for fans starved of live sport, but looks very different to when it departed before lockdown.

At Newcastle there were no spectators to watch the 10 flat races while trainers, jockeys and grooms wore masks.

Zodiakos won the first race on English soil for 76 days as the 22-1 shot edged out stablemate Al Ozzdi on the line.

“That has blown away the cobwebs,” Zodiakos’s jockey Jimmy Sullivan told Sky Sports.

“In this heat today, riding in the mask, it is very warm and after pulling up I pulled it down a little just to get a few breaths in.

“It wasn’t too bad, though, it’s manageable and it’s the sort of thing that in a week you won’t even notice it.”

The 2,000 Guineas, on June 6 at Newmarket, will be the first of the flat-racing season’s “Classic” races.

Earlier in the day, pigeon racing enjoyed a brief moment in the spotlight.

More than 4,000 birds belonging to members of the Barnsley Federation of Racing Pigeons in the north of England were released from a park ahead of a 90-mile sprint.

Organiser John Greenshield said he was expecting his 35 pigeons in the race to start arriving back around one hour and 50 minutes after they were released.

Retired miner Greenshield, 72, said the restart came earlier than many expected and so many of the birds are far from “match fit”.

But he said the return of racing will be a blessing for many in his community and was “like putting oxygen back into the area”.

“The racing is something for people to get out of bed for,” he said. “People are really looking forward to it.”

Snooker will also make a return on Monday as reigning world champion Judd Trump stars in the opening match of the Championship League.

The televised tournament, taking place in the English city of Milton Keynes, is the first snooker event since the Gibraltar Open in March.

Trump described in a tweet how he had been tested for coronavirus before the event: “Arrived in Milton Keynes test done hopefully all clear for action tomorrow... swab up the nose is not enjoyable at all. enjoy that everyone.” Trump faces David Grace and Stuart Carrington tackles Jak Jones in the opening matches.

Five-time world champion Ronnie O’Sullivan’s first match will be against Kishan Hirani on Friday while Mark Selby, who has three world titles, opens up against Lee Walker on Thursday.

“It will be myself, my opponent and the referee,” Selby told Sky Sports. “I’m due to play Thursday. I’ll go down Wednesday and get tested.

“Then straight to the hotel and lock myself in my room and wait for the results to come back.”

Jockey Jimmy Sullivan was pleased to blow the cobwebs away after steering Zodiakos to victory in the 1pm race at Newcastle on Monday — the first competitive sporting action in England since the new coronavirus pandemic struck the country in March.

A thrilling finish was not greeted by the usual roars from the crowd though with no fans present — one of the government’s criteria for the return to some semblance of sporting normality.

Sullivan, like the 45 other jockeys involved in the 10-race card at Newcastle, had to have a temperature check on arrival and adhere to strict social-distancing rules.