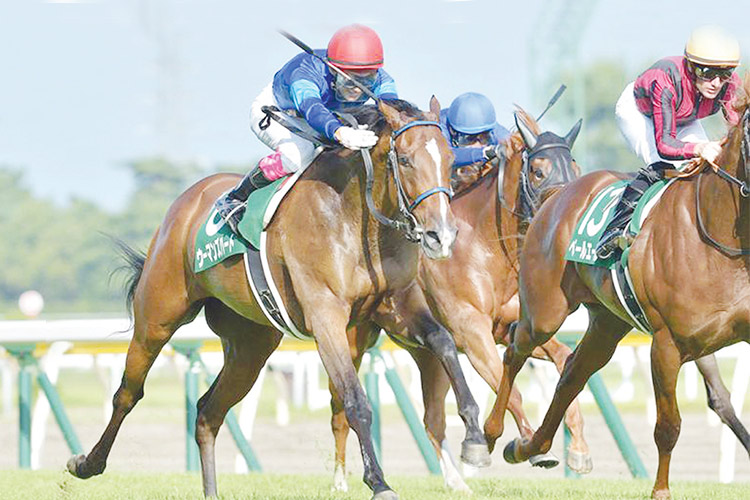 Three-year-old filly Woman’s Heart tackles a mile and a half for the first time in the G1 Yushun Himba, the Japanese Oaks, at Tokyo, Japan, on Sunday.

All five of the Katsuichi Nishiura-trained filly’s previous starts have come over a mile, including a swooping victory in the G3 Niigata Nisai Stakes in August and a fourth in the G1 Hanshin Juvenile Fillies in December.

Kota Fujioka, on board for both outings, partners the daughter of Heart’s Cry again.

Harry Sweeney, President of Godolphin in Japan, said: “The Oaks is somewhat of a stretch for Woman’s Heart. She was a very good two-year-old and indeed was the joint second highest-rated juvenile filly in Japan last year.

“However, she has as yet failed to meet expectations as a three-year-old. In fairness there are perhaps some extenuating circumstances that might explain her lacklustre performances this year.

“The ground was soft and clearly not to her liking on her last outing in the G1 Oka Sho (Japanese 1,000 Guineas) when she beat only two home in an 18-runner field. And though she failed to make the frame on her seasonal debut in the G2 Tulip Sho, she nevertheless was only beaten by a total of two lengths despite being very keen early on.

“There are some positives, however. As she is by Heart’s Cry, she should cope adequately with the 12-furlong distance. Furthermore, she is a big scopey filly and Tokyo’s big galloping track should suit her. Going left-handed will be fine and neither are we unpleased with her draw in stall 13. And she has been training well.

“It will need to be firm ground if we are to see the best of Woman’s Heart and, overall, we will be thrilled if she makes the frame.”

Behind Valentine’s discreet nature lies a talented rider, known for her perfectionism at work, and her attentiveness to others, qualities which means she has become a vital support to Chantilly-based trainer Markus Munch in the running of his yard.

What is less well-known is that her natural compassion first led her into a career in nursing, where she remained for several years. Through riding in her spare time Valentine discovered retrained racehorses, which in turn led to her to try out riding in a racing yard.

For a while she tried to combine her mornings on the track with her nursing schedule but it eventually became too difficult, so she chose to dedicate her career to horses. It will be of no surprise to those who know her that she quickly climbed into a position of responsibility.

Valentine was nominated for the 2019 Trophées du Personnel by her employer which was supported by her colleagues, and was one of three exceptional finalists in the Rider/Groom category.

Having won €2,000 for reaching the finals Valentine’s thoughts turned to how she would spend her well-deserved winnings and she quickly decided to support the cause of horse welfare, in particular aftercare for former racehorses.

As she watched the impact the Covid crisis was having on the activity of aftercare structures, and the potential need for more horses to be retired from racing, she made a donation of €2,000 to French racing’s aftercare charity, ADDP.

“I fully support Au-Delà des Pistes in the work they are doing, their actions and organization are very well thought-out and effective and I felt that supporting this charity in particular would ensure the greatest possible benefit from the money I wanted to donate.

Aftercare has always been a very important consideration for Valentine in a horse’s career, and she takes personal responsibility for all the horses that leave the yard where she works, if they are not being retired to a stud for breeding.