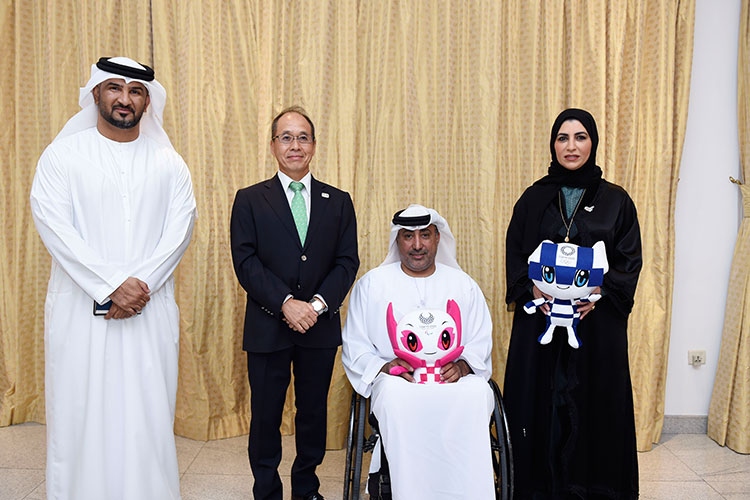 Akima Umezawa, Consul-General of Japan in the UAE, is flanked by members of the UAE National Olympic Committee during a courtesy call on Wednesday.

A delegation from the UAE National Olympic Committee (UAE NOC) visited the Japanese Consulate General in Dubai to review the latest preparations for the 2020 Tokyo Olympics.

The 2020 Tokyo Games are scheduled to be held from July 24 to Aug.9 and the three-member delegation from the UAE NOC met up with Akima Umezawa, Consul-General of Japan.

The UAE NOC delegation comprised of Azzah Bint Sulaiman, Board Member of the NOC along with Ahmad Al Tayeb, Director of Technical and Sports Affairs and Thubian Al Muhairi, General Secretary of the UAE National Paralympic Committee.

Receiving the delegation, Akima handed over a 2020 Tokyo Games mascot ‘Miraitowa’ to Azzah Bint Sulaiman and a ‘Someity’ mascot to Al Muhairi.

‘Miraitowa’, with its pointed ears and chequered patterns originates from the Japanese words ‘mirai’ meaning ‘future’ and ‘towa’ meaning ‘eternity’. ‘Someity’, on the other hand, is a pink cherry blossom-inspired cartoon whose name is derived from the popular cherry tree variety ‘Someiyoshino’, which means ‘so mighty’ in English.

The members from the UAE NOC and the Japanese Consul-General discussed the latest developments about the biggest global sporting event that will bring together thousands of athletes in numerous games in a little more than four months’ time.

The discussions covered the registration, arrival and departure of sports delegations, security and logistics, and facilities provided by the Organizing Committee during the course of the 2020 Games.

Azzah presented a special UAE NOC momento to the Japanese Consul in recognition in recognition of his country’s efforts and build-up to the preparations for the Olympic Games.

Nearly five million students were involved in the selection of the two mascots, after which the organisers of the 2020 Tokyo Olympics created cool characters that combine and reflect the reality and the digital world.

Someity and Miraitowa, the Tokyo 2020 mascots, lit up the office as part of the promotion ‘Make the Beat!’- a cheering project to encourage sports enthusiasts from around the globe to join the Tokyo 2020 Games.

Germany’s former ace Para athlete and ten-time Paralympic medallist, Heinrich Popow also joined the project and performed to the 2020 Beat with the mascots at the Bundesstadt Bonn – Altes Rathaus.

“It was quite nice to be part of the Make the Beat tour, because it makes us feel that Tokyo 2020 is coming closer and it was nice to be next to Someity. Nice to involve the people and to have kids around. It was a great experience and I am happy to be a part of it,” said Popow, who is associated with Ottobock and is involved in athletes’ management.

Being a mentor to the athletes, Popow feels that his role has become even more tough and challenging.

“I am more nervous than I was before, because now I am in-charge of other athletes’ welfare and their success as well. I have a huge responsibility now and before I just had to worry about my own performance and goals,” said Popow.

Having competed in four Paralympic Games, from Athens 2004 to Rio 2016, where he conquered two gold medals, Popow is well aware of what it takes to be a champion athlete.

The preparations just before the Games is one of the toughest parts reveals Popow.

“My advise to the athletes’ is to be calm and continue training as normal to get the expected results.