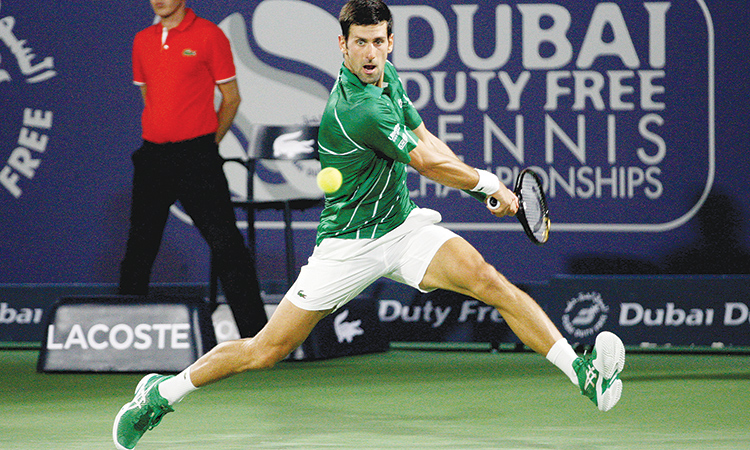 Returning to the court for the first time since lifting a record-extending eighth Australian Open title last month, top seed Novak Djokovic stormed into the second round of the Dubai Duty Free Tennis Championships with a 6-1, 6-2 victory over Malek Jaziri on Monday.

The World No.1 took just 61 minutes to brush aside the Tunisian wild card at the packed Centre Court.

Making his first appearance in Dubai since 2016, the four-time champion Djokovic broke Jaziri twice and took the first set in just 28 minutes.

The Serbian, who is bidding for his fifth title here in Dubai, after winning in 2009-11 and 2013, again broke his rival twice to win the match.

“It’s a great way to start out the tournament. As I’ve said in the press conference prior to the tournament, I miss playing here. I really enjoy it. I enjoy night sessions.

“There’s a lot of people for an opening day of the tournament. It’s a working day so I want to thank everyone coming out. It was a great atmosphere.

“It’s a great way to start out the tournament,” said Djokovic. “As I have said in the press conference prior to the tournament, I miss playing here. I really enjoy it.”

Djokovic will next face 2014 semi-finalist Philipp Kohlschreiber for a spot in the quarter-finals. Talking about his next opponent Kohlschreiber during a post-match press conference, the Serbian said: “I lost to him in straight sets in Indian Wells last year. I am aware of what he is capable of.

“He likes actually playing top players on a big stage. He has lots of experience. He’s very fit. He keeps on playing even at that age on a high level. I certainly will not underestimate him. I will prepare myself. I’m feeling good on the court,” Djokovic added.

Veteran Kohlschreiber recovered from a set down to battle past Egyptian wild card Mohamed Safwat 4-6, 6-4, 6-0.

The German took more than two hours to overcome the Egyptian. Safwat, who made history last month by becoming the first Egyptian since Ismail El Shafei in 1978 to feature in the Australian Open main draw after winning the qualifiers, broke the World No.80 at love to take the first set.

Kohlschreiber bounced back in the second and later broke his rival thrice in the third set to win the match.

“I think I missed too many opportunities in the first set,” said Kohlschreiber. “Well, he won the big points, served quite well on the breakpoints. I think I gave him too many easy mistakes. I was in quite a good position many times, but I missed quite easy shots. I was not unhappy with my game, but this took away a little bit of my confidence.”

Earlier this month, Safwat became just the second Egyptian to win a Challenger title and the first since 1996, in Launceston. It was an incredibly emotional moment for the 29-year-old, who had competed in an incredible 133 tournaments over 10 years without success.

“Towards in the middle of the second set, I don’t know, I just start to feel little bit pain in my quadriceps. It just was on the serve,” said Safwat.

“I think in general overall it was a good match. I just have to look again on the match, see what I could do better.”

Khachanov, a World No.17 from Russia, made a slow start and was broken down twice in the first set. Stepping up, he took control of the match through a tiebreak and never looked back. With two breaks, the Russian raced to a 5-0 lead and later claimed the set easily.

“It was not an easy opening match,” he said. “Always the first round is pretty tough. I’m really happy I could get the win. I have another match, another opportunity to play better. There were some difficult moments during the match,” Khachanov added.