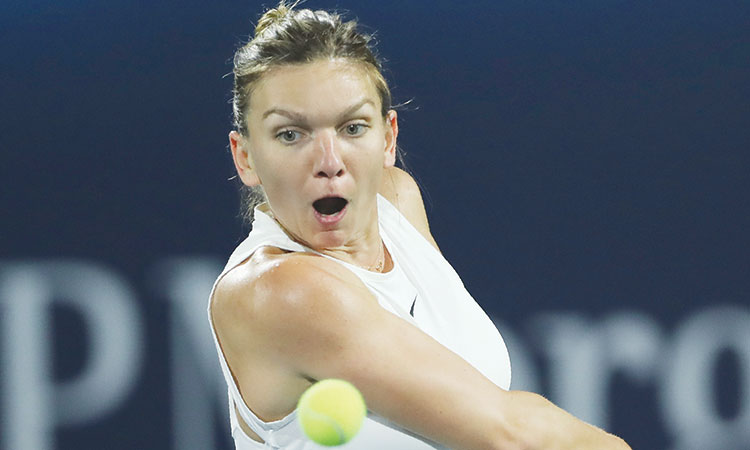 The 2015 winner required two hours to overcome the challenge of Arab world’s top-ranked player. Tunisia’s Jabeur, who became the first Arab female player to reach the last eight of a Grand Slam at the Australian Open last month, started well. With the help of two breaks, she won the first set 6-1.

The World No. 2 bounced back in the second after breaking her rival thrice. The closely contested third set was tight and went to a tiebreak in which Jabeur saved three match points, and created one of her own, before Halep converted her fourth match point to seal a place in the last eight.

The World No. 11 from the Czech Republic took just 67 minutes to brush aside Mladenovic. Pliskova will now face the red-hot Elena Rybakina after the World No. 19 from Kazakhstan claimed a 6-3, 6-3 victory over qualifier Katerina Siniakova.

Pliskova, who has made the quarter-finals in Dubai at the last two editions, broke early to go up 3-0 in the opening set. With another break in the sixth game, the Czech took the set 6-1. With another two break in the second set, Pliskova wrapped up the battle.

“Although the score was easy, she was still fighting in the second set,” said Pliskova.

The Spaniard was stretched to the limit by Russian qualifier during their clash which last for two hours and 25 minutes.

“Well, I think she’s playing great,” said Muguruza. “Nowadays, even if it’s not the biggest name, every match is tough. I think she played super aggressive, super big serves. There’s a lot of things that I could have done better.

“But I’m excited that I gave myself another opportunity to be in the quarter-finals, just staying in the fight because she was playing great, not giving up until the last point. I’m just happy that I get these tough matches on my side. Honestly, the difference is very, very small.”

Muguruza will next play qualifier Jennifer Brady, who eliminated two-time Dubai champion and third seed Elina Svitolina in a major upset on Tuesday.

Brady battled her way to the last eight after a 4-6 6-4 6-1 victory over 2019 French Open runner-up Marketa Vondrousova.

She will now compete in her second quarter-final of the year as a qualifier, following her impressive run last month in Brisbane where after qualifying she defeated both Maria Sharapova and world number one Ashleigh Barty before losing to Petra Kvitova.

Mertens and Sabalenka were a dominant doubles team on American hardcourts in 2019, winning the US Open, the Miami Open, and the BNP Paribas Open in Indian Wells last year. In another match, eighth seed Petra Martic also advanced into the last eight with a 6-3, 6-3 win over Barbora Strycova.

Sania returned to action at the Dubai Open after recovering from a calf injury. She had to cut short her campaign at the Australia Open in January due to the injury.

Sania made a comeback to the WTA season after a gap of more than two years. She made a perfect return as partnering Ukraine’s Nadiia Kichenok she went on to win the women’s doubles title at Hobart International last month.