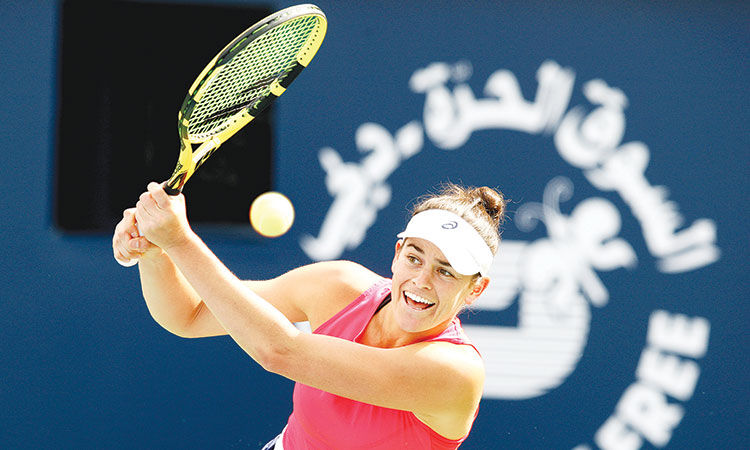 The American took just 61 to brush aside the Ukrainian 6-2 6-1 at the Centre Court. Brady, who shocked world number one Ashleigh Barty in Brisbane last month, dominated the match from the beginning.

Brady broke her top 10 rival twice to claim the first set 6-2. In the second set, the 24-year-old broke the Ukrainian thrice to set up a second round clash with Marketa Vondrousova.

“It was not a bad start, but then everything just went downhill,” Svitolina said.

“I wish I could regroup better. In the end, I didn’t feel so good with the ball. Just everything was all over the place today. I wish I could play better here because I really love to compete here. I have great memories,” she added.

“I think just going out there and believing that I could win helped,” said Brady.

“Obviously respecting my opponent, but not to the point where I put the opponent on a pedestal, I have to think that I have to play my best tennis in order to win.

“I was just focused on my game plan. I competed well from the very beginning. I think I served pretty well throughout the whole match. I started off strong on the serve and was able to apply pressure on the return games. I was happy with the way I performed,” Brady added.

In another upset of the day, defending champion Belinda Bencic was defeated 1-6, 6-1, 6-1 by Anastasia Pavlyuchenkova.

Bencic had seemed to be on the way to an easy victory as she dominated the first set, beginning the match by winning 19 consecutive points. Refusing to give up easily, Pavlyuchenkova dug deep to turn the match around, using her greater strength to unsettle her opponent.

After dropping her serve to begin the second set, Pavlyuchenkova swept the next six games to level the match and then took the first three games of the third set to put herself firmly in control.

“I just kept on fighting, still trying to hit every ball, trying to be there. Mentally I was quite positive, just playing point by point,” said Pavlyuchenkova.

“I think it helped me going into the second set because I took that mentality, mindset of being positive and fighting, trying to do my thing. I was like, ‘You know what, doesn’t matter what the score is, just play. Slowly just started to turn around, I started to find my game,” said the Australian Open quarter-finalist.

Bencic said she was clueless after her defeat at the hands of World No.31. “I’m really not sure yet. I’m trying to analyse what went wrong or what was the turning point,” said the Swiss.

“At this point I still don’t know what happened. Still looking for an answer. I really tried to focus, tell myself that I have to keep going. I’m not sure if mentally I kind of underestimated her after or something. I didn’t maybe expect her to play that well, to kill so many shots.”

Kenin, who was playing her first game since lifting her maiden Grand Slam trophy in Melbourne, won the closely contested first set. The World No.19 Rybakina bounced back in the second and won both the sets comfortably to book the next round clash with Katerina Siniakova.

The Indo-French pair defeated their Russian opponents 6-4, 4-6, (10/8). They will now face seeded duo of Saisai Zheng and Barbora Krejcikova in the next round.

Sania returned to action at the Dubai Open after recovering from a calf injury. She had to cut short her campaign at the Australia Open in January due to the injury.

Sania made a comeback to the WTA season after a gap of more than two years. She made a perfect return as partnering Ukraine’s Nadiia Kichenok she went on to win the women’s doubles title at Hobart International last month.