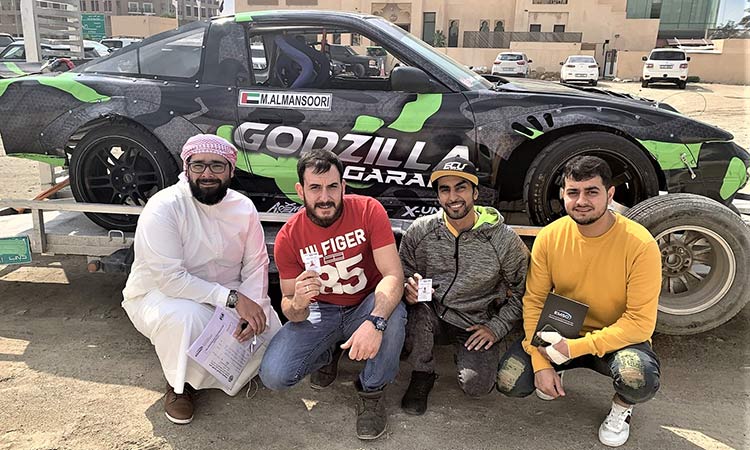 Among the first holders of the new EMSO drifting licence is Mohammed Hassan Al Mansoori, the Emirati competitor who will contest the first round of the Oman International Drift Championship this weekend in Muscat.

Mohammed Ben Sulayem, President of the Emirates Motorsports Organization, announced on Wednesday that all drifting competitors in the UAE will hold EMSO licenses from this year as part of an FIA-backed scheme to improve governance and safety in the sport.

"The UAE is very much the drifting capital of the region for this popular and fast-growing sport so it’s important that we have the highest levels of international safety standards,” said Sulayem, the multiple former Middle East rally champion.

Among the first holders of the new EMSO drifting licence is Mohammed Hassan Al Mansoori, the Emirati competitor who will contest the first round of the Oman International Drift Championship this weekend in Muscat.

Drifting originated in Japan in the 1970s and has grown quickly in popularity around the world. Unlike other forms of motorsport, the driver intentionally oversteers and the winner is based on marks awarded by judges for speed, angle, showmanship and the line taken through a series of corners.

Sulayem, in his capacity as FIA Vice President for the Mena region, was responsible for submitting a proposal to the World Motorsport Council which led to the FIA, motor sport’s world governing body, taking over the governance of the discipline.

A formal FIA Drifting Commission has now been established and the EMSO has nominated Emirati drifting expert Mohammed Al Falasi to be the regional member on this body which sets the global standards for the sport.

"This is a welcome development for our sport as we currently have over 100 drivers in the UAE, and around ten drifting events will be held in the Emirates,” said Falasi.

Drifting is now well established as the second most popular motor sport discipline in the Mena region after karting, and Sulayem is committed to guiding its further growth.

Discussions on the sport’s future development will take place in the presence of FIA President Jean Todt at the FIA Mena Congress to be hosted in Oman next month.

The congress will be held along side the Oman International Rally which makes a welcome return to the FIA Middle East Rally Championship (MERC) calendar for the first time since 2015.

Organised by the Oman Automobile Association (OAA), the special stage rally has been one of the most popular rounds of the regional series since its inception in 1984.

The rally offers some of the finest rallying terrain in the Middle East, with competitors able to enjoy fast, smooth and flowing gravel roads through the Hajar mountains.

The Oman event moves from its former date towards the end of the season to host the opening round of the MERC for the first time. Teams then heads off to Qatar, Lebanon and Jordan before the series concludes in Cyprus at the start of October.

It will be a counting round for the MERC, MERC 2, MERC 3 and MERC Junior Championship for Drivers.