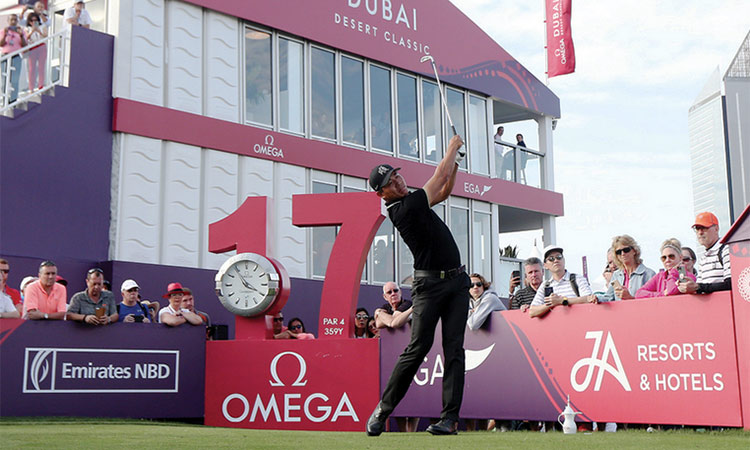 China’s Wu Ashun in action during the third round of the Dubai Desert Classic on Saturday. Reuters

Wu, who is chasing his first triumph since winning in the Netherlands more than a year ago, added four birdies and a single bogey en route to his five-under-par 67 at the Emirates Golf Club.

He moved to 11 under par overall, one shot clear of Frenchman Victor Perez, who racked up six birdies on the back nine to match Wu’s 67.

On the day his country welcomed the Lunar New Year, Wu was relaxed about his chances heading into Sunday’s final round.

“That’s my ‘Happy Chinese New Year Shot’,” he said of his second shot that hit the front of the green and rolled into the cup for an eagle at the par-four opening hole.

“Today my short game was great, just great. I got a feeling just good chips and good with the putter. I’m very comfortable and very relaxed for the weekend and playing the final round. I’m always happy to play the final round in the final group.”

The 34-year-old Wu’s maiden European Tour triumph came on home soil in the 2015 China Open. He has gone to collect wins at the 2016 Austrian Open and Dutch Open in 2018.

DeChambeau, who has been feeling under the weather this weekend, enjoyed a birdie-birdie finish but also carded four bogeys in a round of 70.

“I’m (feeling) worse today. I couldn’t hear anything out of my right ear until number 13 it finally popped,” he said.

“That was helpful a little bit, but, boy, was it a struggle out there for me on the greens today.”

“Being under the weather and fighting through some of the stuff that happened last week (he missed the cut in Abu Dhabi) and persevering this week would be a tremendous honour,” said the American.

DeChambeau finished with a flourish with birdies at the closing two holes, before revealing that like his round, he was below par. Overnight leader Eddie Pepperell signed for a par 72 to be placed sixth, eight under.

Finau was among a star-studded group signed up to a European Tour event that, backed by the Saudi government, in its second year is again splashing out lavish appearance fees as part of a big push to stage international sports events.

Finau, who has had a busy globe-trotting schedule that has included starts in Australia, Hong Kong and California over the past six weeks, said his withdrawal was related to his recent relocation.

“With the need to help my wife get our young family settled in the Scottsdale (Arizona) area after our recent move during the holidays, I’ve made the tough decision to remain at home and withdraw from the field at next week’s Saudi International,” Finau said on Twitter on Thursday.

“I have consulted with Golf Saudi throughout this decision making process, and I truly appreciate how gracious and understanding they have been of my circumstances.

“They have subsequently extended an invitation to me for the 2021 Saudi International, and I am pleased to accept that opportunity.”