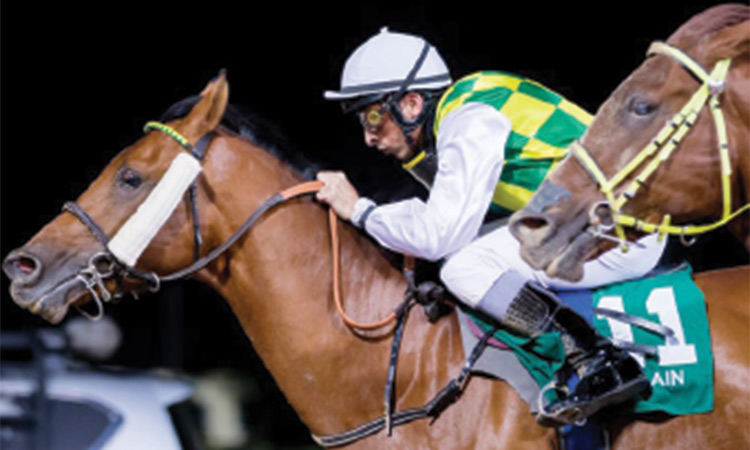 Saarookh, ridden by Jesus Rosales, races towards the finish line to win the 2000m handicap race in Al Ain on Friday.

Racing at Al Ain on Friday was highlighted by a 2000m handicap, the best of six Purebred Arabian contests on a seven-race card. Said event turned into something of a South America affair with Argentine trainer Ana Mendez saddling the winner, Saarookh, under Brazilian jockey Jesus Rosales.

Owned and bred by Sheikh Mansoor Bin Zayed Al Nahyan, Deputy Prime Minister and Minister of Presidential Affairs, the 5-year-old entire has only ever raced in the UAE, his one previous victory having been recorded in a 2200m handicap on the Abu Dhabi turf last October.

A delighted Mendez said: “I am just so lucky to have this job and these lovely horses for Sheikh Mansoor. This horse was a winner for us on his first start this season, on the Abu Dhabi turf, and ran very well when third at Sharjah last time.”

The opening 1800m handicap, restricted to horses in private ownership, may have attracted the maximum allowed field of 15 but very few of the runners were ever involved with Tadhg O’Shea making a bold bid from the front aboard AF Al Baher but eventually thwarted by Antonio Fresu, partnering Prado Du Panjshir for his now main local employer, trainer Musabbeh Al Mheiri and on this occasion owner Nasir Askar. Never far off the pace, Fresu’s mount finished strongly to snatch the spoils, in the process doubling his career tally but winning on dirt for the first time having landed a 1400m turf handicap at Abu Dhabi on his seasonal reappearance in November last year.

The only Thoroughbred race was a 1400m handicap and proved a thriller with at least eight of the maximum field allowed of 15 holding genuine chances entering the final 200m. It was at this point Hucklebuck and Pat Cosgrave hit the front, setting sail for home, only to be collared in the closing stages by California Jumbo, completing a quick double for Al Mheiri and Fresu. A first ever UAE runner for owner Ahmed Belqasem, the 5-year-old gelded son of Scat Daddy was a maiden after 11 previous attempts.

Debutant SS Dostoor introduced himself in perfect style with an ultimately smooth success in a maiden over 1800m, settled off the early pace by Szczepan Mazur before delivering an ultimately decisive challenge just past the 300m pole. Trained by Ibrahim Al Hadhrami for Ahmad Saeed Al Mazroei, the 4-year-old looked in trouble at halfway but, once the field entered the long straight, soon loomed as a big danger to the rest before powering clear impressively in the closing stages.

A 1600m maiden restricted to horses foaled in the UAE also went to a local debutant, in this case Musheer Al Wathba, always kept wide, thus out of any kickback, by Richard Mullen riding for Yas Horse Racing Management (so basically Sheikh Mansoor who also bred the 4-year-old colt) and saddled by Jean de Roualle who trains on the Al Ain track. Always tracking the leaders, the horse who had one start in France, a well beaten seventh of nine, was always travelling well for Mullen. Once they hit the front at 400m out, they were never going to be caught.

A major supporter worldwide of Purebred Arabian racing, both as an owner and a sponsor, UAE Minister of Finance and Deputy Ruler of Dubai Sheikh Hamdan Bin Rashid Al Maktoum was able to celebrate after the very comfortable victory of Ainhoa Topchef in a 1400m handicap, partnered by Dane O’Neill for Erwan Charpy. Settled in about fifth behind the early speed, the 7-year-old entire, always held in high regard by his shrewd trainer, hit the front about 300m out and was never going to be caught.