Lukaku pledges to take racism fight to next level - GulfToday

Lukaku pledges to take racism fight to next level 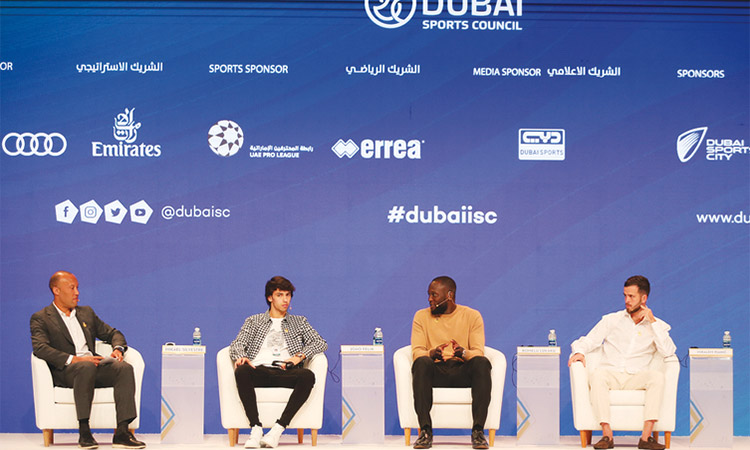 Mohammad Abdullah, Staff Reporter
Inter Milan striker Romelu Lukaku, who was a victim of racism during a match against Cagliari, vowed to take the fight against the prevailing abhorrent practice to a different level.

Instead of being overwhelmed by anger Lukaku decided to use it as a tool to fight against racism in football. He was speaking at the 14th Dubai International Sports Conference in Dubai alongside two other European players, Miralem Pjanic of Juventus and Joao Felix of Atletico Madrid.

“We as footballers have the power to change things. I myself have been through this. It’s a very harrowing experience. I can very vividly recall a match when Mario Balotelli walked off the pitch after he was subjected to racial abuse in Italy. I supported him as he firmly stood for a cause,” said Lukaku.

“These kind of incidents were alien to me until once it actually happened to me. England was where the fans do not encourage any kind of racism, and they are strictly against it,” informed the Belgian striker.

“I want to ask one thing, ‘Why can’t we simply enjoy the game instead of focusing on the players’ skin colour and their religion and their ethnic origin?’” he questioned.

“I think people across the world, especially football fans, need to be educated about this issue. It is a very pertinent topic that must be dealt with on a priority basis,” asserted Lukaku.

He was supported by Pjanic, who plays for arch-rivals Juventus in the Italian League.

“Yes, we have to stand up against racism. It should not be brought into sports by anyone. I will go to any extent to support my team-mates against racism because if they suffer I will also suffer from their pain. It is totally unacceptable,” stressed Pjanic.

Lukaku also opened up about his purple patch at Manchester United before his move to Inter.

“I had a rough spell at United but I learnt a lot there. It is such a big club. What I sowed at United, I am harvesting at Inter and it is the Italians who are benefiting with my experience,” averred Lukaku.

Lukaku was transferred to United from Everton in 2017 but had a very rough spell at Manchester club under Jose Mourinho. He was branded as too fat to be fit to play football, with even a few people accusing him of just wondering about his paycheques and not thinking about the welfare of the club.

Since leaving United, Lukaku has been thriving at Inter and helping them in their push for the Italian League title.

Inter are at the top of the league with 42 points from 17 games while Juventus are hot on their heels with the same number of points from as many games.

All the three players also shared their experiences about using social media to build their image across the globe among their fans.

“I like to give an image of mine to the people through social media. I like people to know how I am off the field,” said Lukaku. It gives us a positive image. I have two persons who help me with my posts but the last word is always mine. I always consult my partners as I like to be creative; it is very interesting.”

Pjanic meanwhile said: “I myself like to post on social media. It helps in building a good rapport with fans and also creates a good image. There is a technical adviser but I take the final decision about my posts.

“Everyone is responsible for his posts as we are conveying a message each time to the world. After losing a match, the hardest thing is to face media. And this is where things go wrong. There is a fine line. I post certain things on the request of sponsors but within the guidelines of my club,” he informed.

Felix, who has more than three million followers on social media, said, “It plays a very important role in making or ruining the image of a player. I like to work on my posts myself. There are people who give me ideas but the final decision is always mine.”