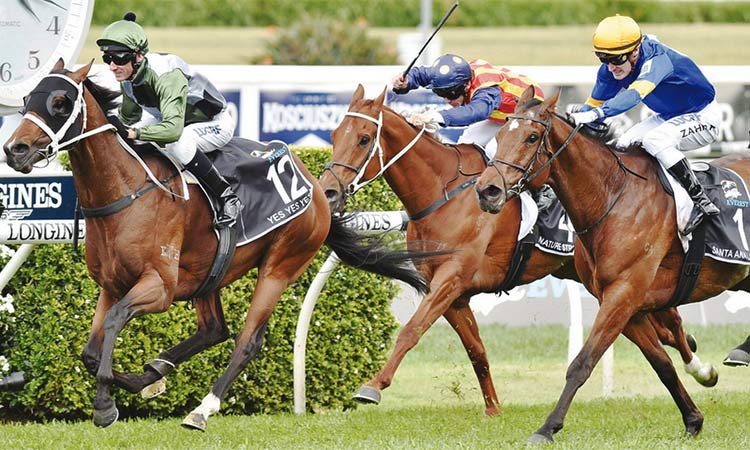 With jockey Glen Boss in the saddle, the three-year-old colt collected a whopping $4.13 million) for barely a one-minute sprint.

On a glorious day, Santa Ana Lane was second and Trekking third in front of some 40,000 people at Royal Randwick, who put aside revelations this week detailing the shocking fate of thousands of retired racehorses.

Meanwhile, a trio of outstanding sprinting performances gave Godolphin runners victory in the G3 Sydney Stakes at Randwick, the G2 Tristarc Stakes at Caulfield and third in the world’s richest turf race The Everest on Saturday, 19 October.

For Deprive the Sydney Stakes win established him as one of the better sprinters in training and as an out-and-out Randwick specialist.

The win, his sixth from six starts at the Sydney track, came thanks to a barnstorming finish which took him from last to first to beat Champagne Cuddles by a long-head with Brutal a further half-head further back in third place.

“He was undefeated at Randwick and he’s still undefeated,” said trainer James Cummings.

Winning rider Hugh Bowman added merit to the win, saying that Deprive had “struggled out of the gates”.

“I let it all unfold in front of me, but I had the horse to do that,” Bowman said.

“He actually threw his head to the side. I didn’t come out on terms. He was going to settle back there anyway but he might have been a bit closer in the run.”

In the $14 million The Everest at Randwick, Trekking made the most of his late entry into the race, storming into third place to be beaten less than a half-length by Yes Yes Yes. Santa Ana Lane split the pair in second place.

The son of Street Cry was turned for him some 10 length off the pace set by the flying Nature Strip, but along with the runner-up began reeling in the leaders over the final 200m to go down by a mere three-quarters of a length.

Trainer James Cummings said Trekking had done an amazing job to run such a stunning race only seven days after earning his place in the race by winning the G2 Schillaci Stakes at Caulfield.

“He’s done our stable proud and he’s a tribute to everyone who played a part,” Cummings said.

In 2018 Osborne Bulls was also a late entry into the race and also finished third.

Jockey Kerrin McEvoy suggested Trekking might have been unlucky nott to have gone even closer.

“He just got held up until probably the 200m. Once he got out he was doing his best work late but the race was all over - all the horses in front of him already had their momentum. He’s run very well,” McEvoy said.

In Melbourne, the star of the day for Godolphin was Savatiano who boosted her potential as a broodmare with a third career Stakes win in the Tristarc, clearing out to a dominant 2-1/4 length win. Cummings’ Melbourne foreman Sean Keogh said the win proved the opinion the team holds of her as one of the more exciting prospects in the stable.

“She did today what we felt she was always capable of,” Keogh said.

Winning rider Craig Williams allowed Savatiano to stride freely in the early stages and she led comfortably until the 300m when he asked for another effort and received an immediate reply.

Savatiano careered away over the final 100m to win by 2-1/4 lengths from Angelic Ruler with Spanish Whisper a further head away.

While slaughtering racehorses, as opposed to rehoming them, is not illegal in Australia, a two-year undercover probe by the Australian Broadcasting Corporation alleged the practice was far more widespread than acknowledged.

It detailed healthy horses being brutalised at one abattoir before being killed on an “industrial scale”, with their meat shipped overseas for human and pet consumption, sending shockwaves through the industry.

The scandal cast a shadow over The Everest, but it didn’t deter the punters who turned out en masse for one of the biggest events on the global racing calendar.

“I promise you, that was one hell of an experience,” said an ecstatic Boss.

“It was very surreal. I had a plan in my head about what I wanted to do and Chris was in my corner on how I wanted to ride the horse.”