In the presence of Sheikh Mohammed, Godolphin horses steal the show at the Dubai Future Champions Festival.

The Charlie Appleby-trained Shamardal colt, seeking a second consecutive G1 victory over seven furlongs following a blistering display in the Vincent O’Brien National Stakes, broke smartly and was covered up in sixth of the nine-strong field by William Buick. Unbeaten two-year-old Military March joined a notable roll of honour as he gamely beat Al Suhail in the mile G3 Dubai Autumn Stakes.

Military March, stepping up to Pattern company for Saeed Bin Suroor following a debut success on Newmarket’s July Course in July, broke well and disputed the early running before establishing a narrow advantage after a furlong.

Pinatubo cruised up to press for second approaching the final two furlongs and quickened well to challenge Arizona for the lead with just over a furlong to race. He took up the running shortly after and stayed on powerfully to score by two lengths 1m 26.55s on soft ground.

Sheikh Mohammed said: “When you win like that and show a lot of courage, it makes you very pleased and happy. I was following Pinatubo and I have seen him many times, we all love him.

“Every year, one horse is your favourite and Pinatubo is the favourite this year. We hope to find something like him next year. Shamardal is a very, very good horse and he produces good horses. They are very fast and great horses.

“I will be enjoying the winter and we are looking forward to Pinatubo and others next year.”

Appleby said: “Pinatubo is all heart. I was confident, even though he didn’t travel into the race like we have seen he can do because the ground is testing out there. It is testament to the horse.

“The dip can sometimes catch horses out. I said to William to hold on to Pinatubo for as long as he could and wait until the rising ground before asking him. William gave him a fantastic ride and, once it came to the fight, Pinatubo wasn’t going to lie down.

“I would like to say thank you to Sheikh Mohammed. He is the one who gives us all the confidence to run these horses. Well done to the team at home, who have done a great job, and the boys back in Ireland, who brought this horse up. It’s fantastic to be here and get the result.

“It’s great for the public. We all saw last weekend what it meant with Enable and unfortunately results like that can happen. Sometimes, when you are in this industry, you don’t realise what it means to the public. We are all behind this horse and thankfully he has gone and kept the dream alive for the winter.

“We haven’t decided any of our winter team for Dubai - we were more concerned about getting this job done first – and it is a nice discussion to have.”

Buick said: “Pinatubo was spectacular in the National Stakes but you were never going to get a performance like that from any horse on this ground. He really did show his brilliance today – the ground is tough out there and it is hard work, while there were some proper horses who brought good form to the table.

“Today was a different test for him. It became a bit of a stamina test but Pinatubo is a great horse with a great mind. He is a jockey’s dream and I am very fortunate to be riding such horses.

“He was in a nice rhythm and it was just a case of letting nothing get away from me on the ground. He is a fast horse with a quick action and a great turn of foot – good or fast ground in a Classic is going to suit him better. Only the brilliant ones can overcome extremes of ground and that is what it was today. He had to be brilliant.

“He is faultless. He has a great mind and the pedigree to progress as a three-year-old. He will certainly get a mile and there is a fair bit of stamina on the dam’s side. Horses like these don’t come around very often, so I am very fortunate.”

Meanwhile, Military March will be hoping to emulate the three most recent winners of the Dubai Autumn Stakes – Best Solution (2016), Ghaiyyath (2017) and Persian King (2018) – who all graduated to G1 honours for Godolphin.

Suroor said: “Military March has been doing well since he won nicely on the July Course and I have always liked him. He is a big, strong horse who looks like he handles any type of ground - it was soft today and he coped with it well. He always tries in the mornings and we have been very happy with his progress.

“We will give him a break and take him back to Dubai. Then we will talk to Sheikh Mohammed but I hope that he can run in G1 races next year.” 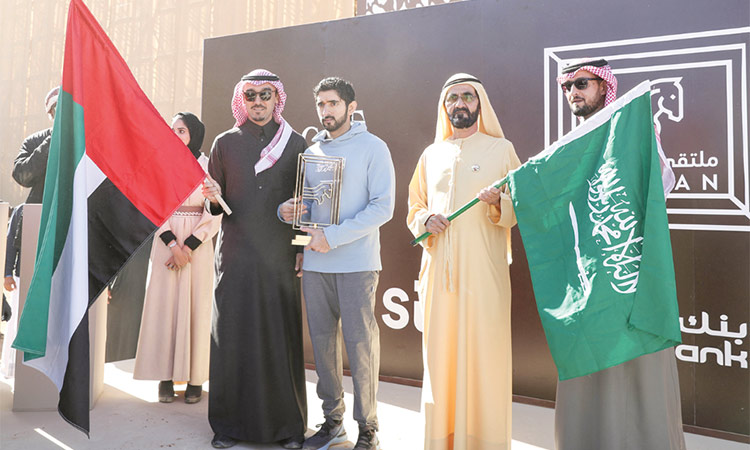 The Custodian of the Two Holy Mosques Endurance Cup is considered one of the most important events on the horse endurance race calendar in the world.