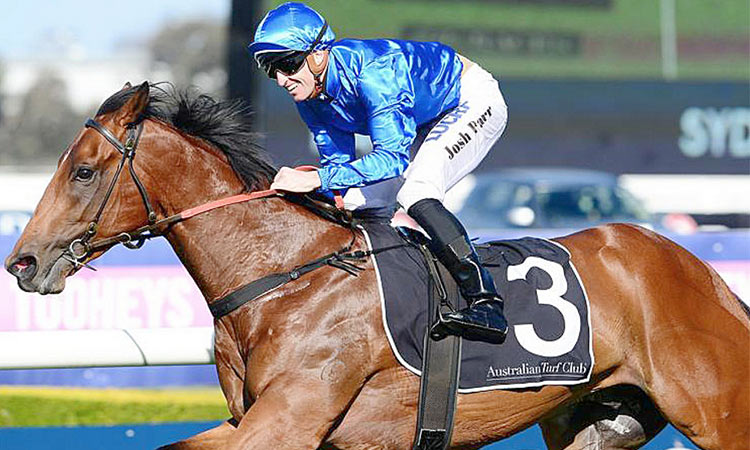 Jockey Josh Parr leads Bivouac to victory in the G2 Run To The Rose at Rosehill on Saturday.

The G1 Golden Rose is now firmly on the radar for Bivouac following his success in Saturday’s G2 Run To The Rose at Rosehill. A performance that banished memories of his out-of-character second placing at his previous start also earned Bivouac the full confidence of trainer James Cummings.

“That was the Bivouac who won so well at Caulfield a month ago,” Cummings said.

“He’s a very smart young horse who we can proceed with to the 1,400m of the Golden Rose with some confidence.”

Bivouac emerged from his two-year-old season as one of the better performers in a stable of stars, winning at Listed and G3 level and indicated he had returned from his winter spell in the same sparkling form, scoring a dominant victory in the G3 Vain Stakes at Caulfield on Aug.17.

But the son of Exceed And Excel was struck with a heavy track at his next start, finishing second to Exceedance, who he had behind him on third place on Saturday.

The Run To The Rose win has also brought the G1 Caulfield Guineas into focus, although Cummings declined to be drawn on the colt’s future beyond the Golden Rose, run at Rosehill on Sept.28.

“We’ve got one target to aim at for now and that is the Golden Rose,” he said.

“The Guineas is there, but we won’t be thinking about it until we see how he comes through his next run.” Jockey Josh Parr had Bivouac racing generously outside the lead until the 300m when he called on the colt who responded magnificently.

The pair quickly opened up a two-length lead which they maintained to the line, beating Yes Yes Yes and Exceedance.

In the day’s feature event, the G1 Makybe Diva Stakes at Flemington, Hartnell ran his usual brave race to finish fourth to Gatting.

Meanwhile, two-year-old colt Royal Crusade ran a race full of promise when going down by a neck in the G2 Champagne Stakes over seven furlongs at Doncaster, UK, on Saturday.

The son of Shamardal, the least experienced of the five runners having won at Newmarket on his only previous start for Charlie Appleby, broke well and soon disputed third behind the leaders.

Royal Crusade quickened strongly to take a narrow advantage under William Buick well over a furlong from home and stayed on after being headed by Threat approaching the final half-furlong.

Threat, winner of the G2 Gimcrack Stakes at York in August, won in 1m 25.42s on good to firm ground, with Royal Crusade coming home three-quarters of a length ahead of third home Juan Elcano.

Charlie Appleby said: “Royal Crusade ran a blinder, especially considering it was only his second start. He has come up against some battle-hardened rivals and a class horse in Threat.

“I feel that he has lost nothing in defeat and has gained some valuable experience. We will see how he comes out of this race before deciding whether to run him again this season or put him away for the year.”

Elsewhere, in Canada, hugely promising two-year-old filly Fair Maiden looks to back up two comprehensive victories on her G1 debut in the Natalma Stakes over a mile on turf at Woodbine on Sunday.

The daughter of Street Boss stormed clear in the closing stages to score by seven and a half lengths in the extended six-furlong Catch A Glimpse Stakes at the same course on Aug.17. She also created a striking impression when making all to take a five-furlong Polytrack maiden by 14 and a half lengths at Arlington, USA, on July 21.

Trainer Eoin Harty said: “Fair Maiden has been very impressive on her two most recent starts and hasn’t done anything wrong in her training since the Catch A Glimpse Stakes.