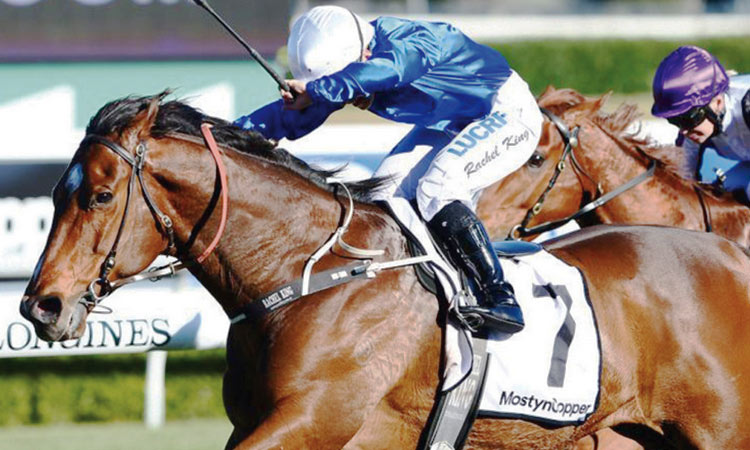 Deprive runs towards the finish line during the Show County Stakes at Randwick.

The Randwick specialist Deprive survived in a tight finish to the G3 Show County quality to keep the flow of Stakes winners coming for Godolphin in Australia on Saturday.

The win was the fifth for Deprive at Randwick and the gelding’s seventh overall.  On a day when some of the stars of the Australian team, and one of the newcomers, made encouraging returns to racing Deprive took the honours with the most significant success of his career.

Given a perfect run by Rachel King, Deprive took an opening that presented at the 250m, dashed clear and then held on to score in by a centimetre from Trope whose connections demanded to view the photo finish print.

“We’re tempted to try him in something in Melbourne like the Sir Rupert Clarke,” trainer James Cummings said.

“He vindicated a couple of really solid performances in the winter. He’s still winning at Randwick.”

“It was a nailbiter. Trope is a pretty capable galloper with an impossible finish. We’re honoured and a little flattered to have beaten him.”

“Rachel was really confident in Deprive though, and he has a really good winning attitude.”

Deprive’s win was the fifth at Stakes level for the Cummings team in the first month of the new season, continuing the momentum established in 2018-19 when the stable won an Australian record 62 Stakes races.

While Deprive was the only graded winner for the day, the first-up effort of Flit to finish second to Libertini in the G2 Darley Silver Shadow Stakes suggested she would soon be a winner.

Also catching the eye was the multiple G1 winner Avilius who steamed home for fourth in the G1 Winx Stakes, and Cascadian who found the 1200m of the Show County too short, flashing home from the tail of the field to finish fifth to Deprive at his first start since shipping from France.

Meanwhile, Gyllen and Crown Walk both aim for a second Group race victory on the final major fixture of Deauville’s summer meeting on Sunday.

Four-year-old Gyllen (Andre Fabre/Mickael Barzalona) lines up over an extended 12 furlongs in the G2 Grand Prix de Deauville after coming home fifth over the same course and distance in the G3 Prix de Reux on Sunday.

The Medaglia d’Oro colt excelled over 10 and a half furlongs on softer ground last season, winning the Listed Prix Francois Mathet at Saint-Cloud and the G2 Prix Eugene Adam at Maisons-Laffitte.

His seven rivals include G2 Hardwicke Stakes second Nagano Gold and Ziyad, who went down by a short-neck in the G1 Grand Prix de Saint-Cloud.

Lisa-Jane Graffard of Godolphin said: “Gyllen is a very honest horse, who tries his hardest, and we are hoping that he can run well.

“The ground is drying out at Deauville and we feel that he is better on a softer surface, but Mickael Barzalona was very happy with him after the Prix de Reux. He is the type of horse who could spring a surprise.”

She posted a career-best effort when second in the mile G1 Prix Rothschild at Deauville in July, 2018, and makes her first start since finishing fifth in the G3 Prix Edmond Blanc, also over a mile, at Saint-Cloud in March.

Lisa-Jane Graffard said: “Crown Walk is having her first run back after a long lay-off but Henri-Alex Pantall couldn’t be happier with her condition.

“She ran very well in the Prix Rothschild at Deauville last year and we are hopeful of another good performance.”