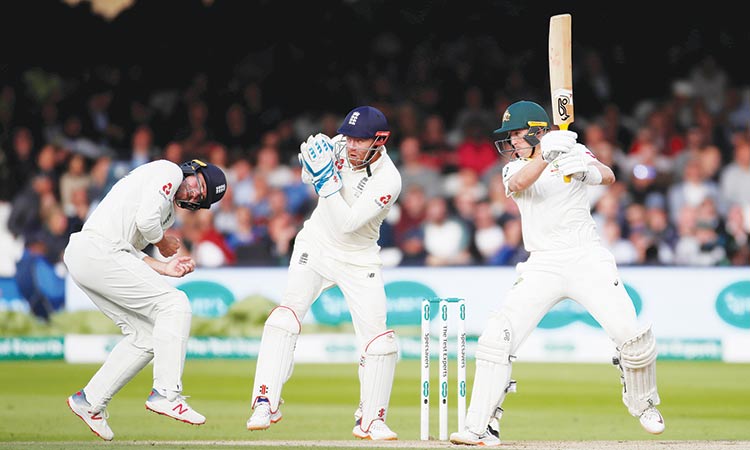 Australia’s Marnus Labuschagne plays a shot against England during their second Ashes Test on Sunday. Reuters

The second Test between England and Australia ended in a draw at Lord’s on Sunday.

Australia, set an unlikely 267 to win in a minimum of 48 overs after England captain Joe Root’s declaration, finished on 154-6.

A draw always looked likely in a match that saw five whole sessions lost to rain and Australia’s Steve Smith ruled out with concussion on Sunday after being hit on the neck by a Jofra Archer bouncer during his innings of 92 on Saturday.

Four wickets after tea gave England hope of what would have been a stunning win. Ashes-holders Australia, bidding for their first Test series win away to England in 18 years, remain 1-0 up in the five-match campaign following their 251-run victory at Edgbaston last week. The third Test at Headingley starts on Thursday.

Earlier, Archer took two wickets and struck Test cricket’s first concussion substitute, Marnus Labuschagne on the grille of his helmet as England pushed for an unlikely series-levelling victory in the second Ashes clash at Lord’s on Sunday.

Australia were 46-2 in their second innings at tea on the final day of the second Test. That left them needing 221 more runs in a minimum of 35 overs to reach an unlikely victory target of 267.

Test debutant Archer also struck Steve Smith on the neck with a rapid bouncer during the star batsman’s 92 on Saturday.

Smith was passed fit to resume his innings on Saturday but further tests on Sunday sidelined him with concussion.

Now there are doubts over Smith’s availability for the third Test at Headingley starting Thursday, with an Australia spokesman saying the “short turnaround is not in his favour”.

Australia, bidding for their first Ashes campaign triumph on English soil in 18 years, lead the five-match series 1-0 after a 251-run win at Edgbaston last week.

In that match, former captain Smith marked his first Test since completing a 12-month ban for his role in a ball-tampering scandal in South Africa with superb innings of 144 and 142.

Under new protocols introduced for the inaugural World Test Championship, Australia could replace Smith with a full, batting substitute in Labuschagne.

World Cup-winning fast bowler Archer also took an impressive 2-59 in 29 overs on Saturday and the 24-year-old Sussex quick was in the wickets again on Sunday with two for two in seven balls.

David Warner’s miserable series continued when the left-hander fell for five -- his fourth single-figure in as many innings -- when he edged Archer to Rory Burns in the slips.

And Australia were 19-2 when Usman Khawaja was caught behind off a fine ball just outside off stump for two. Archer’s first ball to Labuschagne, a bouncer that sailed over the batsman’s head, was called wide.

His second, timed at 91.6 mph, was much straighter and Labuschagne could not get out of the way. The batsman required several minutes of on-field attention before resuming his innings and later bravely drove Archer down the ground for a well-struck four.

Earlier, Ben Stokes, missed twice on Saturday and the beneficiary of an Australia decision not to review a rejected lbw appeal, scored 115 not out before captain Joe Root declared England’s second innings on 258-5.

The left-handed batsman slog-swept off-spinner Nathan Lyon for two sixes in as many deliveries on the way to a 160-ball century, his seventh in Tests and second against Australia.

Stokes also hoisted paceman Peter Siddle for a six into the Grandstand before Root eventually called a halt. His innings included 10 fours.

Although the sun was shining by the tea interval, rain -- which had already washed out five sessions in this match, delayed the start of Sunday’s play by over an hour and so made a draw more likely. 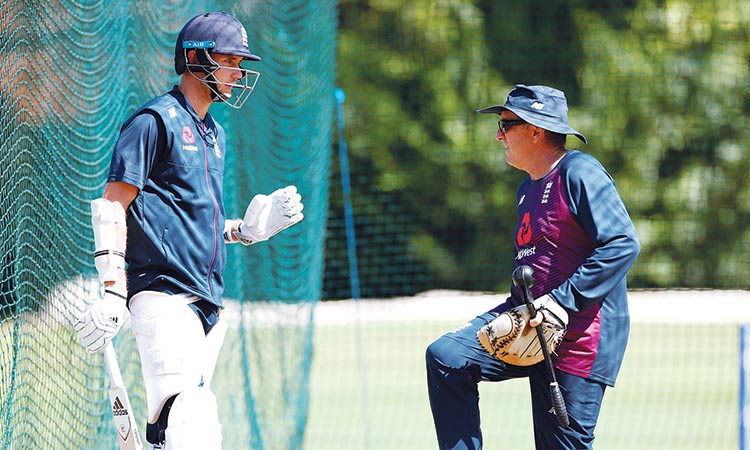 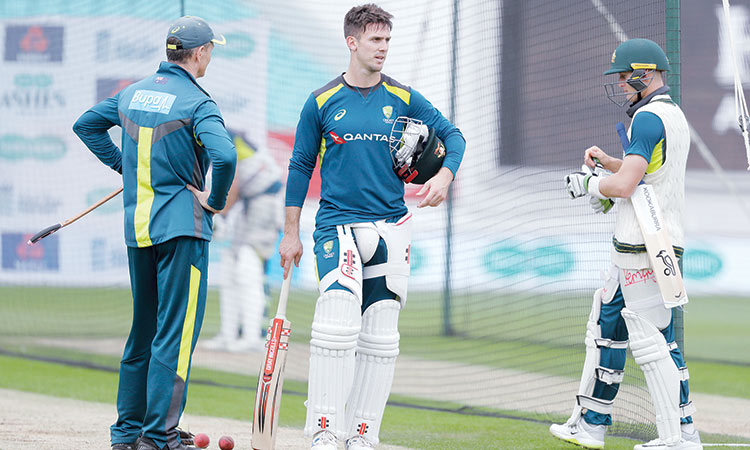