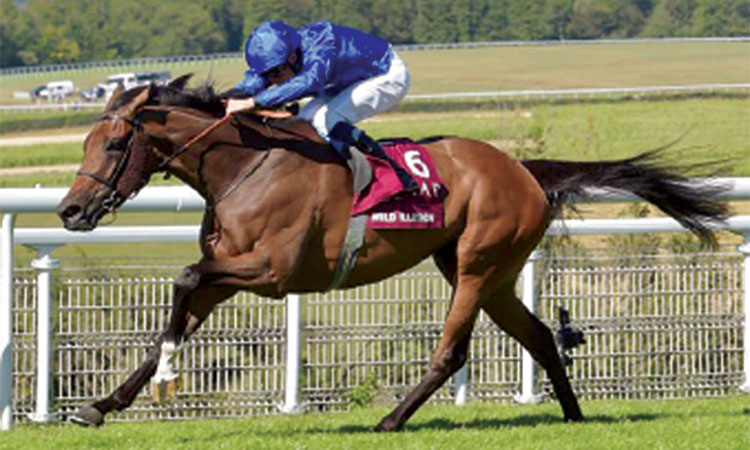 Wild Illusion during her win in the G1 Nassau Stakes at Goodwood last year.

Four-year-old Wild Illusion twice won at G1 level over the same distance last year, in the Nassau Stakes at Goodwood, UK, and the Prix de l’Opera at Longchamp, adding to her success in the mile G1 Prix Marcel Boussac at Chantilly in October, 2017.

Wild Illusion has made two appearances so far this year, both in G1 company, and kept on at the same pace to come home fourth on her latest outing in the 10-furlong Pretty Polly Stakes at the Curragh, Ireland, at the end of June.

Musis Amica captured the G3 Prix de la Grotte over a mile on heavy ground at Longchamp in April, 2018, and ran on strongly to go down by a neck to Laurens in the Prix de Diane over two and a half furlongs further at Chantilly two months later.

The four-year-old daughter of Dawn Approach has filled the runner-up spot in Listed races on both her outings this season, most recently when going down by half a length over 10 furlongs at Deauville on Sunday, 21 July.

A field of nine fillies and mares for the Darley Prix Jean Romanet also includes this season’s G1 Grand Prix de Saint-Cloud winner Coronet, G1 Sussex Stakes third I Can Fly and With You, who was successful in last season’s G1 Prix Rothschild.

Charlie Appleby said: “Wild Illusion found the going a little too quick at the Curragh but should find conditions at Deauville more to her liking.

“We feel that she appreciates some ease in ground these days, while she won two G1 races over this distance last season.

“Everything should be in her favour and she will be a major player if she can return to the level of form she showed during her three-year-old campaign.”

Lisa-Jane Graffard of Godolphin said: “Musis Amica has progressed with every race this season and we are hoping that she can return to the form she showed last year, which would give her a good chance.”

Earthlight (Andre Fabre/Mickael Barzalona) steps up to G1 level for the six-furlong Darley Prix Morny following three impressive displays, including a four-length victory over the same course and distance in the G3 Darley Prix de Cabourg on July 28.

The Shamardal colt also scored decisively over six furlongs at Deauville in a conditions race at the start of July and started out with a neck success in an extended five-furlong newcomers’ contest at Maisons-Laffitte in June.

His seven rivals are headed by A’Ali, Raffle Prize and Arizona, who all won G2 races at Royal Ascot this year, plus G2 Richmond Stakes scorer Golden Horde.