Godolphin snare feature double as spring blooms Down Under - GulfToday

Godolphin snare feature double as spring blooms Down Under 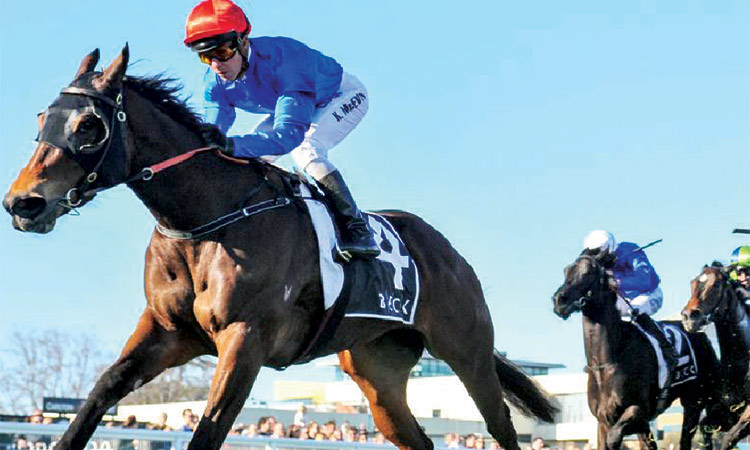 Kerrin McEvoy leads Exhilarates to victory in the G3 Quezette Stakes at Caulfield on Saturday.

Magic Millions-winning filly Exhilarates has set the early standard for new-season three-year-olds in Australia with a devastating victory in the G3 Quezette Stakes at Caulfield on Saturday.

One of the best of Godolphin’s vintage crop of juveniles of 2018-19, Exhilarates overwhelmed her opposition with a performance that suggested a stellar spring could be ahead.

And her win was matched by that of stablemate Bivouac who returned from his winter spell with a dominant win in the G3 Vain Stakes.

Exhilarates had placed herself among the top bracket of two-year-olds last season, winning one of the country’s top-three juvenile races, the A$2 million Magic Millions 2YO Classic.

She was spelled after failing on a bottomless tack in the G1 Golden Slipper, but showed today she had come back in sparkling form.

“She was outstanding today, we couldn’t have ordered a better return to racing,” said Godolphin Melbourne foreman Sean Keogh.

“That was the performance of a high-class filly.”

Winning rider Kerrin McEvoy described the win as “exactly what you would want to see.” “The race was run at a good tempo that gave her every chance to show what she’s got,” McEvoy said.

“You always want to see them come back at three, and she’s done that in style.” Jockey Kerrin McEvoy gave Exhilarates time to settle in the 1,100m event, calling on her passing the 400m.

The pair quickly closed on the leaders, putting away a strong field, seemingly with ease.

“She a very classy filly. I won the Magic Millions on her and she has come on since then,” McEvoy said.

“That was a dominant win, a very good effort.”

Earlier at Caulfield, Bivouac made an impressive statement with his stroll to victory in Saturday’s Group III Vain Stakes (1100m).

Bivouac was competitive with the likes of Dawn Passage and Yes Yes Yes during the Sydney autumn but the Godolphin colt looked bigger and stronger as he demolished a small field in the Vain Stakes.

Jockey Hugh Bowman had little to do to get home on Bivouac in the Vain Stakes, letting him follow an even speed to the home turn before letting the colt improve from the 300m.

Bowman pushed Bivouac ($3 fav) to quicken at the 200m before the son of Exceed And Excel cruised to a 4-¼ length win over the long-time leader Sebrakate ($12) and the Hawkes Racing-trained Dirty Work ($26).

Dubious, which opened a $2.70 favourite before drifting to $3.20, finished a distant fourth.

“The stable feels as though he has progressed since his two-year-old season and that was shown today,” Bowman said.

“It wasn’t a high-pressure race and I got out when I wanted to.

“He didn’t face any adversity but when the time comes and he does have to (face adversity), he’ll have the ability to overcome it.

“It was no surprise that he let down like that but what I loved the most was the way he relaxed in those middle stages.

“For a horse that hasn’t probably had much experience down here, he cornered well and he balanced and that’s a great attribute.

“He’s certainly got better things in store in the coming months and we expected a good performance and it was no surprise to see him win the way he did.”

The evergreen Hartnell also put up an encouraging first-up performance at Caulfield, finishing third in the G2 PB Lawrence Stakes being the high-class filly Mystic Journey and Cliff’s Edge.

While the run suggested Hartnell had returned in good order, it also took his racetrack earnings beyond A$7 million in a race in which he has now finished first, second and third.

Meanwhile, in Sydney, it was all in a day’s work for Pandemic, an outstanding winner of the Everest Carnival Handicap (1100m) at Randwick’s Kensington meeting on Saturday.

The boom Godolphin three-year-old made the transition from a provincial midweek maiden win on debut to Sydney Saturday grade look routine and drew praise from Hall of Famer Darren Beadman and jockey Tommy Berry.