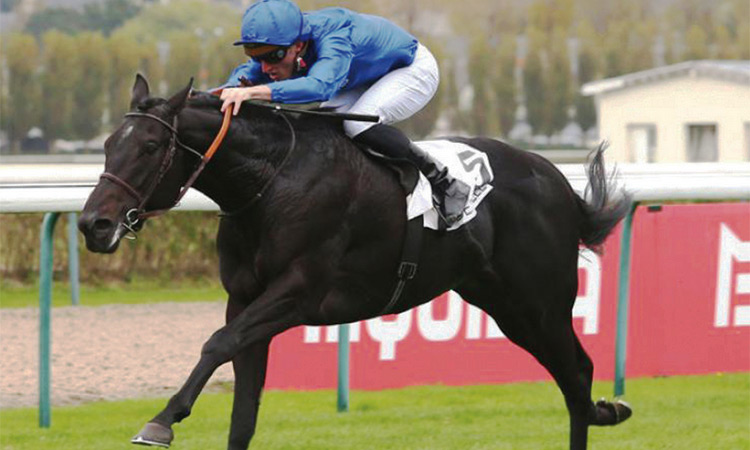 Roman Candle held on to the lead until just before the finish, being pipped on the post by the fast-finishing Headman in the G2 Prix Guillaume d’Ornano.

Classic Fit runs in the G3 Torrey Pines Stakes over a mile on dirt at Del Mar, USA, on Saturday. The three-year-old daughter of Bernardini made an excellent reappearance when runner-up in the G2 Mother Goose Stakes over an extended dirt mile at Belmont Park on June 29, going down by two and a half lengths to Dunbar Road.

In 2018, the Michael Stidham-trained filly won three of her four starts with all victories coming over a mile. After taking a dirt maiden Monmouth Park in September, she progressed to land an allowance option claimer on Tapeta at Presque Isle Downs in October. She ended her campaign back on dirt with victory in the Hut Hut Stakes at Gulfstream Park in December.

Florent Geroux partners Classic Fit at Del Mar, where her seven rivals include Sneaking Out and Colonial Creed, who were second and third respectively in the G2 Summertime Oaks.

Stidham said: “Classic Fit is very well and has trained fantastically since her first start of the year.

“For the most part, Saturday’s race is a bit of a step down in class so we think she is definitely in the right spot.

Meanwhile, Glorious Journey steps back up in distance for the seven-furlong G2 Hungerford Stakes at Newbury, UK, on Saturday.

The four-year-old son of Dubawi, who races in the colours of HH Sheikha Al Jalila Racing, made his latest appearance when eighth, beaten just under six lengths, in the G1 Darley July Cup over six furlongs at Newmarket on July 13.

He had previously gone down by a neck when runner-up in the G3 Criterion Stakes over seven furlongs at Newmarket in June and was also second over six furlongs in the Listed Leisure Stakes at Windsor in May.

In 2018, Glorious Journey was a G3 winner over a mile when taking the Prix Daphnis at Deauville, France in August. He was also a G3 winner in France as a two-year-old, taking the seven-furlong Prix La Rochette at Saint-Cloud.

Charlie Appleby said: “We set Glorious Journey a big task in the July Cup, but he ran creditably and has come out of the race well.

“His best form is over seven furlongs, so the step back up in trip is a positive. The ground should hopefully be on the easy side at Newbury, which is going to be another positive.

“A repeat performance of his runs at Windsor and Newmarket earlier this season should make him a live contender.”

Elsewhere, in Deauville, France, Divine Image makes her first European start of 2019 in the G2 Prix de la Nonette over 10 furlongs on Saturday.

The three-year-old filly, who is trained by Charlie Appleby, was last seen when coming home 13th in the G2 UAE Derby over an extended nine furlongs on dirt at Meydan, UAE, on Dubai World Cup Night, Saturday, 30 March.

She had previously recorded two impressive wins on dirt at Meydan, taking the G3 UAE Oaks over an extended nine furlongs in February and the Listed Al Bastakiya over the same distance on Super Saturday, 9 March. In 2018, Divine Image made one start on Polytrack at Chelmsford City, UK, in December, when she was the impressive six-length winner of a mile novice contest.

William Buick takes the ride on Divine Image, who will be making her first appearance on turf. Seven other three-year-old fillies go to post, with the pick of the opposition including G1 Prix de Diane fourth Etoile plus the G3 winners Suphala, Cartiem and Platane.

Also in Deauville, Roman Candle finished a close second in the G2 Prix Guillaume d’Ornano over a mile and a quarter on Thursday.

The three-year-old colt, who is trained by Andre Fabre, tracked the leader Talk Or Listen and was delivered by Mickael Barzalona to challenge for the lead entering the last quarter mile. He ran on to lead approaching the final furlong and kept on well.

Roman Candle held on to the lead until just before the finish, being pipped on the post by the fast-finishing Headman, who got up to win by a head in 2m 13.10s. The going was described as very soft. Lisa-Jane Graffard of Godolphin said: “Roman Candle ran an excellent race.

“The race panned out perfectly for him and he just got beaten by a better horse on the day. It is a bit frustrating to be beaten by such a narrow margin, but there are no excuses.”