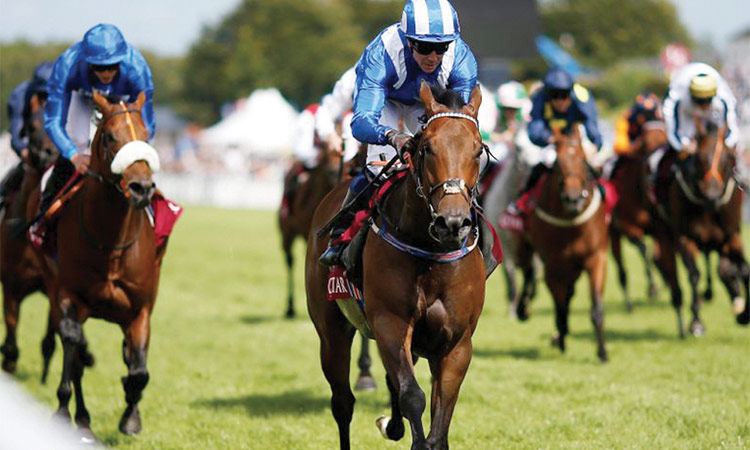 The Charlie Hills-trained Battaash will bid to write his name into the history books at the Sussex track in the five-furlong showpiece he has won for the last two seasons.

Battaash bids to win the King George Qatar Stakes at Glorious Goodwood for the third successive year in 2019 and his trainer Charlie Hills is confident in his current form.

The sprinter is among a strong team of Goodwood contenders in the Hills yard, which also includes Phoenix Of Spain, Bartholomeu Dias and Afaak.

Having claimed the Group 2 prize in both 2017 and 2018, Dark Angel gelding will bid to complete hat-trick in the five-furlong dash on Aug.2.

Making a winning return in the Temple Stakes at Haydock in May, as he did 12 months ago, the Sheikh Hamdan Bin Rashid Al Maktoum, Deputy Ruler of Dubai and UAE Minister of Finance, owned five-year-old then had to settle for the runner’s up spot for the second successive year behind the now retired Blue Point on his most recent start in the King’s Stand Stakes at Royal Ascot.

Hills said: “Battaash came out of Ascot really well, and the plan with him now is to go back to Goodwood to try and win the King George Stakes.

“He likes it at Goodwood. He has been down there twice and won twice, so hopefully the same will happen this time.

“I thought he ran really well at Ascot. We were not as far forward as wanted to be, and he was slightly dragged out of the race.

“The two raced alone, then he had to make his move sooner than we wanted, and he just got outstayed by Blue Point again – and on that track the rain didn’t help him.”

Despite Battaash now being a year older, Hills feels his Group One-winning speedster is in a much better place to the one he was in for most of 2018.

Supervising his star on Tuesday morning, Hills said: “Last year we were never 100 per cent happy with him. He took a long time to come in his coat and he was a little bit on edge in his training.

“Since he came back into training this year he has been a different horse. He has been a pleasure to train and be around.

“As you saw there, he is beautifully relaxed cantering up there with his ears pricked and seems to be taking everything in and enjoying himself.”

Aidan O’Brien senses the time is right to step Hermosa up to a mile and a quarter for next week’s Nassau Stakes at Glorious Goodwood.

Hermosa could have headed for the French Oaks over that distance, after winning the English and 2000 Guineas, but O’Brien decided to delay the move and stick to a mile for last month’s Coronation Stakes at Royal Ascot instead.

She had to settle for second place behind Watch Me on that occasion, but lost little in defeat and heads to the Sussex Downs in good form.

“That’s the plan, to run her in the Nassau – that is what we are looking at,” said O’Brien. “Everything seems well with her, so we are thinking of going up to a mile and a quarter. She was going to go to France for the French Oaks, then we decided to go for the Coronation instead.”

O’Brien may have a second Nassau contender in Just Wonderful, who has finished well behind Hermosa three times this season and was second in the Belmont Oaks in New York when trying 10 furlongs for the first time.

“Just Wonderful is a possible as well,” he said. “She ran in America last time and ran well over the trip – and she is comfortable over that trip.”

Meanwhile, progressive performer Impulsif continued his march through the ranks when making all to win the G3 Prix Messidor over the straight mile at Deauville, France, on Sunday.

The Andre Fabre-trained four-year-old son of New Approach, twice successful at the same distance in conditions races leading up this higher-class contest, broke well and soon took up the running under Mickael Barzalona.

Impulsif, always going well, was asked to stretch for the line with two furlongs remaining and ran on strongly to see off challenges from first Study Of Man and then Trais Fluors, both G1 performers.

He won the Prix Messidor cosily by a half-length from Trais Fluors in 1m 38.80s on good turf, with Study Of Man a further one and a quarter lengths in arrears. It was his first attempt at a Group race.

Barzalona commented: “Impulsif has found his way over a mile and for his last three runs he has really enjoyed being in front.

“I knew the horse we had to beat was Study Of Man and when he tried to put the pressure on Impulsif was going much better.

“I think this horse is going to be very competitive, but I will leave the next target to the trainer and the owner.”