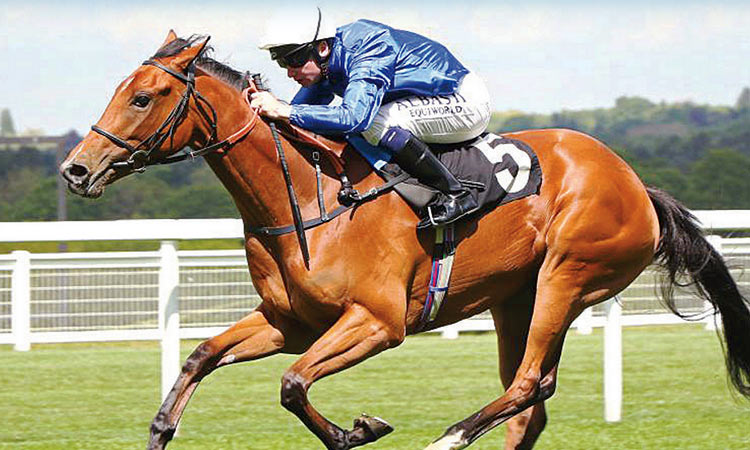 Final Song was third in the G2 Queen Mary Stakes at Royal Ascot in June.

The duo lined up over a furlong shorter in the G2 Queen Mary Stakes at Royal Ascot on June 19, when Final Song stayed on well to take third and Divine Spirit faded to 14th.

Both runners enjoyed winning debuts over five furlongs in May, with Final Song (Saeed Bin Suroor/Ryan Moore, drawn six) making all for a comprehensive five-length victory at Ascot.

The seven contenders for the Duchess Of Cambridge Stakes are headed by Queen Mary Stakes winner Raffle Prize and Daahyeh, who took the G3 Albany Stakes at the same meeting.

“This is another tough race, but she has the class and has been working nicely. I am hoping for a good result.”

Appleby explained: “We are putting a line through Divine Spirit’s run in the Queen Mary Stakes because the ground turned quite slow with all the rain.

“She is back racing on a sound surface and the step up to six furlongs is another positive.

“It looks a strong renewal, but Divine Spirit won very well on debut at Windsor and we are looking forward to seeing how she goes over this distance.”

Elsewhere on Friday’s card at Newmarket, Secret Advisor (Charlie Appleby/James Doyle) steps back up in trip for the bet365 Trophy, an 18-runner heritage handicap over a mile and six furlongs.

The five-year-old son of Dubawi, second to top-weight with 9st 6lbs, has shown good form at the distance, including when winning the valuable Melrose Handicap at York in August, 2017, and was 12th on his first start for nearly 22 months in the 12-furlong Duke Of Edinburgh Handicap at Royal Ascot on June 21.

Appleby said: “Secret Advisor had been off the track for a long time before he ran at Royal Ascot and has definitely come forward for that effort.

“The step back up to a mile and six should suit and we feel that he should run a big race.”

2018 Derby hero Masar and promising juvenile Platinum Star bid for G2 honours on the first day of the July Festival.

Masar makes his second appearance of 2019 in the 12-furlong G2 Princess Of Wales’s Stakes. He returned to action after a long time off the course when fifth over the same trip in the G2 Hardwicke Stakes at Royal Ascot on June 22, keeping on following a bad stumble emerging from the stalls.

The four-year-old colt emulated his sire New Approach when storming to a historic victory for Godolphin in the G1 Derby at Epsom Downs in June, 2018, but missed the rest of the season with a leg injury.

Appleby said: “We were pleased to get Masar back on track at Royal Ascot, although the race didn’t pan out as we would have liked.

“It was just one of those things – he slipped as he was coming out of the stalls and got his legs in a bit of a muddle.

“Most importantly, he has come out of the race well and is showing us the right signs at home.

“As fit as we thought we had him beforehand, it has certainly sharpened him up physically and mentally.

“He has progressed well and looks the one to beat.”

Platinum Star returns to six furlongs for the G2 July Stakes following a fine effort over a furlong shorter in the Listed Windsor Castle Stakes at Royal Ascot on Wednesday, 19 June, when he stayed on strongly to go down by half a length as runner-up to Southern Hills.