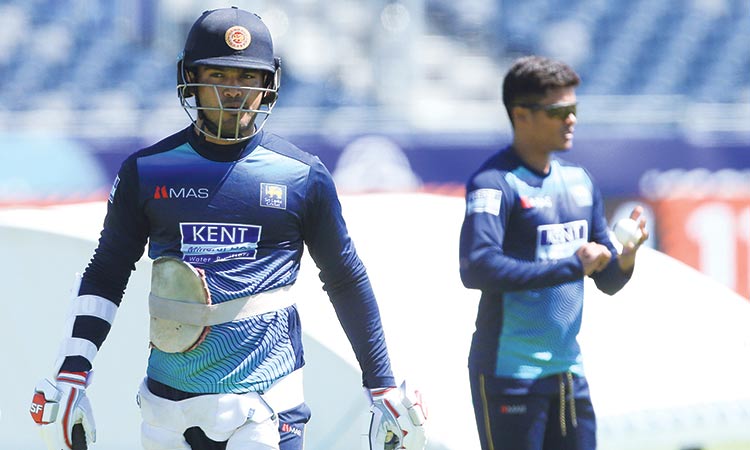 Sri Lanka’s Milinda Siriwardana during nets ahead of their match against S. Africa. Agence France-Presse

Sri Lanka will aim for nothing but a win to keep themselves alive in the ongoing World Cup when they take on South Africa at the Riverside Cricket Stadium on Friday.

A win would keep them afloat as competition tightens for the three remaining semi-final spots, but for that they have to get past a team with nothing to lose.

Sri Lanka are currently seventh in the standings with two wins and two no-results, but two points would take them straight up to fifth, just below England, who are themselves in a fight to make the last four now.

Of course, any gain on the points table is only momentary as teams continue to scrap hard and displace each other, but it is precisely for that reason that every point from here on out matters.

Just like Pakistan’s win over New Zealand opened up the tournament, same would happen if the Lankan Tigers manage to defeat the Proteas.

For that, Sri Lanka will hope for its players to come out with an inspiring performance as they did against England where they defended 233. Lasith Malinga will once again be the key for Sri Lanka’s success in what is a do-or-die game for them.

The veteran pacer has shown that he still has the ability to turn matches on their head and is a proven performer under pressure.

Malinga has had a crucial role to play in both of Sri Lanka’s wins so far in the competition, snaring seven wickets across those two games, and figures to be a prominent part of Sri Lanka’s campaign going forward.

Hathurusingha said South Africa still posed a threat in Friday’s match, even though they will be heading home after the group phase.

“When you have no pressure of qualifying, they can come and play without any pressure, fearless cricket and that can get them going, so at the same time they can turn up and just want to go home, so you never know,” he said.

Sri Lanka lost their one-day international series earlier this year in South Africa 5-0 but Hathurusingha said the team were confident after their 20-run win against England.

“We think that we have a good chance because we are coming off two wins (they also beat Afghanistan earlier in the tournament) and a very good win against England, although we didn’t play our best cricket to win the game in terms of batting.

“And I think we had a perfect bowling display, defending that target (232-9). I mean, cricket is a funny game.

“You can lose so many games and win the one that is the most important, it is this next game. I think we have enough talent and the skill-set to compete with them tomorrow.”

The coach talked about the importance of putting partnerships together and the need to “click as a batting group”.

“We have been practising a lot of power-hitting with various ways of using the net facilities we have,” he said.

“The good thing that what has worked for us is that the top order, we had two good partnerships at the start, apart from the last game. We know what they can produce and we still back them to do that so hopefully in the next few games they come off.”

South Africa, on the other hand, would aim to regain some lost pride with a consolation victory. Since their debut in 1992, this has been the worst World Cup campaign for the Proteas as they have failed to go even past the group stage. With just a win from seven games, the Faf du Plessis led side are currently placed at the second last spot in the 10-team table.