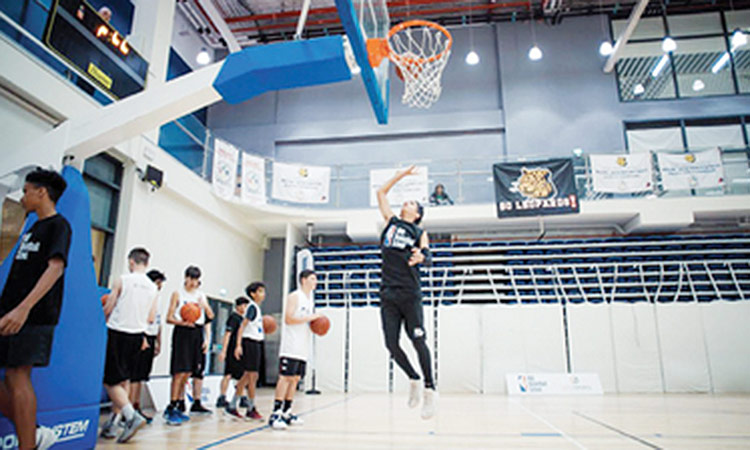 The National Basketball Association (NBA) and StryxSports, one of the UAE’s leading sports providers, announced that the second NBA Basketball School camp will be held at the Dubai American Academy in Al Barsha from June 28 to July 5.

The tuition-based basketball development programme, which debuted in Dubai in March, includes skill-based sessions and stations focusing on the fundamentals of the game.  Registration for the camp is now open.

“The appetite to play basketball and learn the fundamentals of the game among youth in Dubai and across the region continues to grow,” said NBA Associate Vice President of Basketball Operations, Europe and Middle East, Neal Meyer.

“Building on the success of the inaugural camp, we look forward to working with a new group of talented young boys and girls seeking to improve their fundamentals under the direction of NBA personnel.”

“After an outstanding first NBA Basketball School camp in March, we were extremely delighted by the positive feedback and support we received from our players and parents,” said CEO STRYX SPORTS Seif Tawfik.

“Our team is proud to take part in fostering the local UAE talent, enabling them to pursue their dreams and passion.”

“I am looking forward to helping develop the future generation of basketball players on my first ever visit to Dubai,” said Minor.  “This camp will be a great way for boys and girls who love the sport of basketball to hone their skills and grow as players.”

Minor averaged 6.9 points and 1.4 assists per game over a five-year career with the Boston Celtics. The 6’6’’ shooting guard also participated in the 1996 NBA Slam Dunk Contest where he finished third.

Following the camp, more than 300 boys and girls will have participated in the programme, including Sarah Elgamel and Nadim Smaira, who participated in the inaugural camp and then represented the UAE at the Jr. NBA Global Championship Europe and Middle East Selection Camp in Bologna, Italy.

“It was an amazing experience to compete with other players from other countries.  I made great friends and we had a lot of fun,” said Smaira.  “The coaches were great, and I learned a lot in one week.  I will remember this camp for a long time.”

“I really enjoyed my time at the Jr NBA Global Championship selection camp in Bologna, Italy,” said Elgamel.  “There was so much pressure to carry throughout the week, but overall it was one of the most amazing and memorable experiences I have ever had.  I learned so much on and off court and I wouldn’t trade this opportunity for anything.”