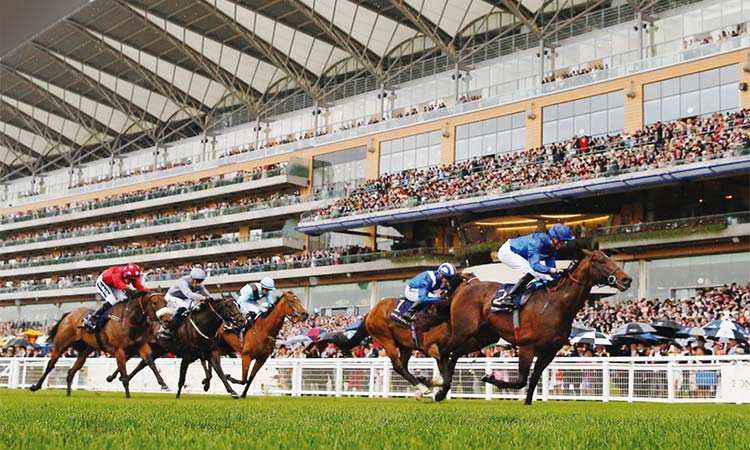 Blue Point bids to become only the second horse in almost 100 years to follow up victory in the G1 King’s Stand Stakes, by winning the six-furlong G1 Diamond Jubilee Stakes later in the same week.

Blue Point (Charlie Appleby/James Doyle, drawn nine) bids to become only the second horse in almost 100 years to follow up victory in the G1 King’s Stand Stakes, run over five furlongs on the opening of Royal Ascot, by winning the six-furlong G1 Diamond Jubilee Stakes later in the same week.

The five-year-old Shamardal horse ran on strongly to beat Battaash in the King’s Stand Stakes on Tuesday, June 18, having overcome the same horse when taking the prestigious sprint in 2018.

Blue Point has also scored at G1 level over six furlongs this year, comfortably winning the G1 Al Quoz Sprint at Meydan, UAE, in March, and holds the six-furlong course record at Ascot, following a blistering display in the G3 Pavilion Stakes in May, 2017. He has won on four of his five races at Ascot.

Appleby said: “We left Blue Point in the Diamond Jubilee at the start of the week and the race was in the back of our minds, depending on how he came out of the King’s Stand Stakes.

“All the signs have been good so far and we felt that he deserved to have another crack at a G1 sprint at a course that really seems to suit.

“The only other opportunity we had was the G1 British Champions Sprint in October, when the ground conditions could potentially be very testing.

“Stepping back up in trip shouldn’t be an issue as he won the Al Quoz Sprint over the trip earlier this year and holds the six-furlong course record at Ascot.

“The way it is drying out at Ascot and it will hopefully be lovely ground on Saturday afternoon.”

The four-year-old has his first appearance since staying on strongly to win Britain’s premier Classic, the G1 Derby, over the same distance at Epsom Downs in June, 2018.

The New Approach colt had previously shown a high level of form over shorter trips, winning the mile G3 Craven Stakes at Newmarket by nine lengths and taking third over the same course and distance in the G1 2,000 Guineas.

Appleby said: “I am delighted to be getting Masar back on the track and his preparation has gone very well.

“It is exciting to have the Derby winner back, but it goes without saying that he hasn’t raced for more than a year and will come on for the run, mentally more than anything.

“Having said that, I can’t fault the way his preparation has gone. He has ticked every box going into this race and looks great.

“We had the option of the G1 Prince Of Wales’s Stakes (1m 2f) earlier this week, but I think we made the right call, with the calibre of that race and testing ground on Wednesday.”

Three-year-old Dubawi colt Space Blues (Appleby/ Doyle, drawn seven) goes for a third straight win over seven furlongs in the G3 Jersey Stakes (18 runners) after capturing the Listed Surrey Stakes at Epsom Downs on May 31 and a York handicap on May 15.

Appleby said: “Space Blues has been very progressive since dropping back to seven furlongs. He has come out of Epsom Downs in great order and I can’t find any negatives going into this race.

“It’s a step up in class, but he is showing all the right signs at home.”

Pinatubo (Charlie Appleby/James Doyle, drawn seven) was also successful at Epsom Downs on Friday, 31 May, when quickening well to take a six-furlong conditions race, and the two-year-old colt steps up in class and trip for the 17-runner Listed Chesham Stakes over seven furlongs.

The son of Shamardal made an impressive debut in a six-furlong Tapeta novice race at Wolverhampton on Friday, 10 May, when he readily beat subsequent Listed Windsor Castle Stakes runner-up Platinum Star.

“Pinatubo won well at Epsom Downs and we feel that the step up to seven furlongs is going to suit. He has some solid form and looks to be a live contender,” Appleby added.