Al Hilalee makes all in G2 Prix Hocquart at Chantilly 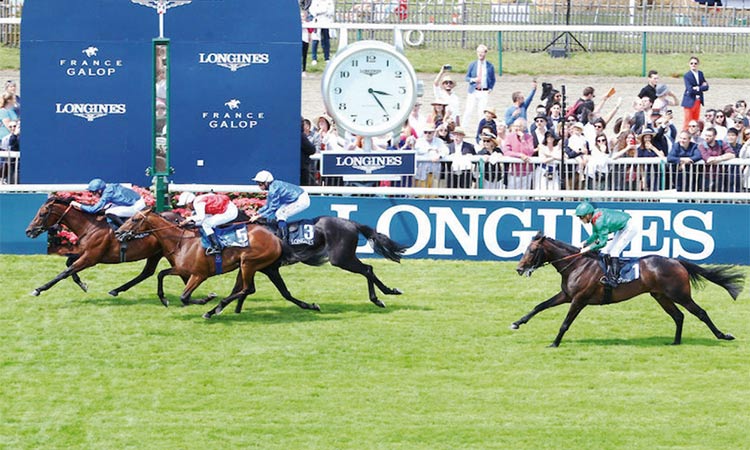 Action from the G2 Prix Hocquart over a mile-and-a-half at Chantilly in France on Sunday.

Three-year-old colt Al Hilalee bounced back to form with a brave all-the-way success in the G2 Prix Hocquart over a mile and a half at Chantilly, France on Sunday.

The Charlie Appleby-trained son of Dubawi, a Listed winner over a mile at Deauville on his only previous French appearance in August, gained his biggest success. He has been successful in three of his five races.

Al Hilalee was smartly into stride under James Doyle and soon opened up a length advantage over his four rivals.

He stayed on strongly to see off the challenge of Khagan (Andre Fabre/Mickael Barzalona) entering the final furlong and withheld the late thrust of Soft Light to prevail by a neck in 2m 29.10s on good to soft turf.

Khagan, who was bumped approaching the line by the runner-up, finished a further neck back in third as the first three home came home two lengths clear of Kasaman in fourth.

Charlie Appleby commented: “I was pleased with the performance of Al Hilalee. The step up in distance and ease in the ground have produced an improved effort.

“That will hopefully have done his confidence some good and we will look at returning to France for the G1 Grand Prix de Paris.

“He could potentially be a horse for the G1 St Leger later in the season on September 14.”

Lisa-Jane Graffard of Godolphin said: “Khagan was perhaps slightly unlucky in the finish today although Mickael Barzalona didn’t feel it was an excuse because it happened late on. It wasn’t ideal, but Al Hilalee was very brave and dug deep.

“We will see how Khagan comes out of this race before making any plans.”

The daughter of Pivotal, dropping to seven furlongs after scoring decisively in a mile Listed race for trainer Henri-Alex Pantall at Hanover on

May 1, raced in third of the eight runners behind Brian Ryan and Zargun early on.

She was relegated to fourth by Waldpfad turning for home, but stayed on well under Soufiane Saadi to briefly challenge for the lead down the centre of the course entering the final furlong.

Broderie could not match Brian Ryan and Waldpfad in the closing stages, but kept on to go down by two lengths in total.

Brian Ryan rallied strongly near the line to beat Waldpfad by a neck in 1m 24.70s on good ground, with a further length and three-quarters back to the Godolphin runner.

Lisa-Jane Graffard of Godolphin said: “We are delighted to get a Group placing with Broderie.

“There is no reason why she shouldn’t run again at this level, possibly back over a mile next time.”

All the while, Due Process, having his first start in a Group race, just failed to achieve a fifth successive victory in the G3 Unicorn Stakes over a mile on dirt at Tokyo on Sunday.

The progressive three-year-old Daiwa Major colt, trained by Takayuki Yasuda and partnered by Mirco Demuro, stepped forward again in terms of performance when beaten a head by Wide Pharaoh in 1m 35.5s. The first two finished clear, with a further three lengths back to the third.

Due Process, draw eight, raced in midfield towards the outside and made progress over two furlongs out.

He ran on to go second approaching the final furlong, threw down a strong challenge to Wide Pharaoh and it was a thrilling battle all the way to the line.

Harry Sweeney, President of Godolphin in Japan, reported: “This is was a very good run by Due Process and it was simply the nod of the head that prevented him winning the main prize.

“Furthermore, he didn’t enjoy much luck in running and had a wide trip all the way and was brought even further wide on the final corner.

“Nevertheless, he rallied well in the straight and fought gallantly. The winner, who was already a Group winner on turf, was drawn in stall one and had a more straightforward trip.