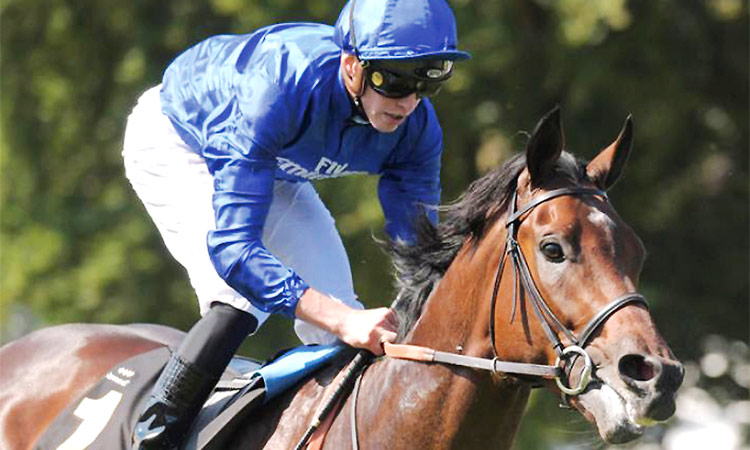 Al Hilalee is one among the three horses to represent Godolphin at Chantilly.

Three-year-old colts Khagan, Al Hilalee and Melicertes all try for a first Group victory at Chantilly, France, on Sunday. Khagan (Andre Fabre/Mickael Barzalona) remains over a mile and a half in the G2 Prix Hocquart following three excellent efforts over the same distance, most recently when trying to make all and finishing a clear second in the G3 Prix du Lys at Longchamp on May 26.

He made good late headway to be a close third behind Jalmoud in the Listed Prix de l’Avre at Longchamp on May 4 and scored by three lengths on his debut in a Saint-Cloud maiden at the start of April.

Al Hilalee (Charlie Appleby/James Doyle), a Listed winner over a mile at Deauville in August and unbeaten in a couple of starts at two, also lines up in the G2 Prix Hocquart following appearances over shorter distances at Newmarket, UK, this season.

The Dubawi colt faded to finish down the field in the G1 2,000 Guineas over the straight mile o n May 4 and came home third in the 10-furlong Listed Fairway Stakes two weeks later.

Lisa-Jane Graffard of Godolphin said: “Khagan looks to have a great chance on paper and conditions should suit.

“Hopefully, he is still improving and we see no reason why he won’t run up to his best.”

Charlie Appleby commented: “The step up to a mile and a quarter saw some improvement from Al Hilalee on his last start.

“We are hoping that another step up in distance will produce further improvement.”

Melicertes (Andre Fabre/Mickael Barzalona) makes his Pattern debut in the mile G3 Prix Paul de Moussac after three good performances and could be considered unlucky not to go into this race unbeaten. The Poet’s Voice colt triumphed by three lengths in a mile conditions race at Maisons-Laffitte on May 21.

He went down by a short-neck when headed close home by Eagle Hunter in a Longchamp conditions race over the same trip in April and earlier the same month enjoyed a winning debut in a mile maiden at Saint-Cloud.

Melicertes, drawn in stall four, has six rivals headed by G2 Derby Italiano second Mission Boy and Anodor, who was third behind Godolphin’s Royal Marine in last season’s G1 Prix Jean-Luc Lagardere. Lisa-Jane Graffard added: “Melicertes has a bit to find on the ratings, but is very much on an upward curve and this looks a good opportunity for him to make his Group race debut.

“Any ease in the ground will suit and he should run well.”

Godolphin is also represented at Chantilly on Sunday by Vintager (Charlie Appleby/James Doyle, drawn five), who returns to a mile in the G3 Prix Bertrand du Breuil for the first time since storming to a comprehensive victory in a Newmarket handicap in July.

The four-year-old faded to fourth on his latest start in the Listed Festival Stakes over a mile and a quarter at Goodwood, UK, May 25.

Charlie Appleby reported: “We feel that the drop down in trip and ease in the ground will hopefully see Vintage rekindle some of his best form.

“He won very well over a mile at Newmarket last year and has shown a good level of form on a softer surface.”

The four-year-old colts face each other for a second time, having contested the mile G1 Asahi Hai Futurity Stakes at Hanshin in December, 2017, when Tower Of London took third and Right On Cue finished 12th