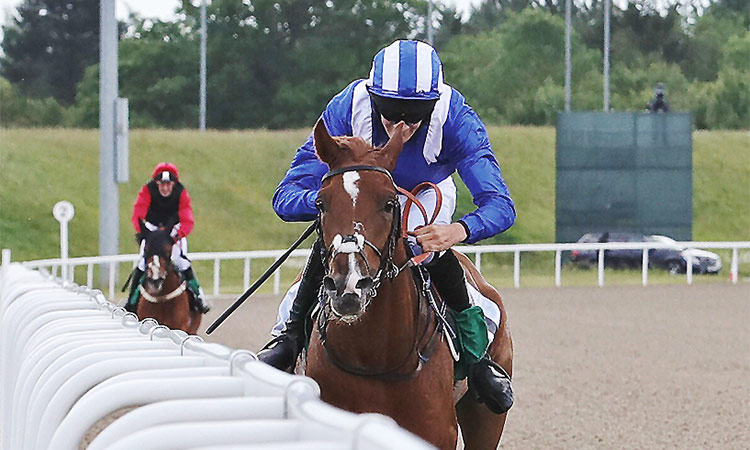 Mawarid runs toward the finish line during the race.

It was a memorable day for 18-year-old Isaac Buncle who rode Mawarid, his first ever winner, in the Wathba Stallions over a mile at Chelmsford City in a time of 1.52.50.

Buncle has been working for trainer James Owen since February and Owen told him he could ride Mawarid in the race three weeks ago.

Mawarid is a four-year-old son of No Risk Al Maury owned and bred by  Sheikh Hamdan Bin Rashid Al Maktoum, Deputy Rules of Dubai and Minister of Finance, who was almost as inexperienced as his jockey, having only his third racecourse appearance. Buncle has been riding him every day at home in preparation and that paid off in the race on Saturday.

In second place was Kayclaire ridden by Charlie Price for owner-trainer Delyth Thomas. Price started his career riding as an amateur and has recently turned professional.

In third was Sarah Innes and Nicola Buchan’s Zayin Zamurai, ridden by James Harding for trainer Adam Newey, who had teamed up to win the corresponding race last year with Vindetta.

ARO’s Genny Haynes along with other UK racing officials gave away the trophies on behalf of the Festival.

Meanwhile, Motamarris is likely to drop back for Prix Messidor in trip after his fine run to finish third in the Prix du Jockey Club.

The Freddy Head-trained colt had won his first three races, but was taking a big jump in class for the French Derby.

Having helped set a strong pace, he was passed by French Guineas winner Persian King - who in turn gave best to impressive winner Sottsass.

“Apparently they went 1.02 for the first five and a half furlongs, which is serious pace, and he wasn’t left alone by the horse inside him - yet he still hung on to be third.

“That was his first run in a Pattern race, and he bumped into what I think are two very good horses.

“The second horse cruised up alongside us looking like he was going to win easily, yet the winner quickened up and went by easily, so I think that will turn out to be a high-class race.”

Motamarris’ performance was perhaps all the more meritorious, at a time when his stable is struggling to find winners.

Gold added: “I don’t think it’s any secret Freddy’s horses haven’t been in top form this year, but I saw the horse the day after the race and he still looks raw to look at - far from the finished article, so it surprised me how well he ran.

“Freddy thinks he’ll stay a mile and a half, but when we looked at his pedigree we’re now thinking of bringing him back to a mile.

“If he’s well he might run in the Prix Messidor over a mile at Maisons-Laffitte. If he has the pace for that then we’ll look at the Prix Jacques le Marois.

“He obviously stays further, but he has plenty of early pace, so it’s worth coming back in trip. I think he’s very much a horse for next year - he could be really smart next year.

“Hopefully his future is all ahead of him.”

All the while, Charlie Appleby favours the Arlington Million as a possible next target for Old Persian instead of trying to secure back-to-back victories at Royal Ascot.

The Newmarket trainer may aim Old Persian at the Grade One prize in Illinois on Aug.10 rather than bidding to follow up last year’s King Edward VII Stakes victory in either the Prince Of Wales’s or Hardwicke Stakes.

After claiming his first top-level success in the Dubai Sheema Classic at Meydan in March on his penultimate start, the Dubawi colt could finish only seventh of nine in the Coronation Cup at Epsom.

Appleby said: “He was entitled to come forward for his run in the Coronation Cup at Epsom, but he did disappoint us the way he shut down in the last furlong.”