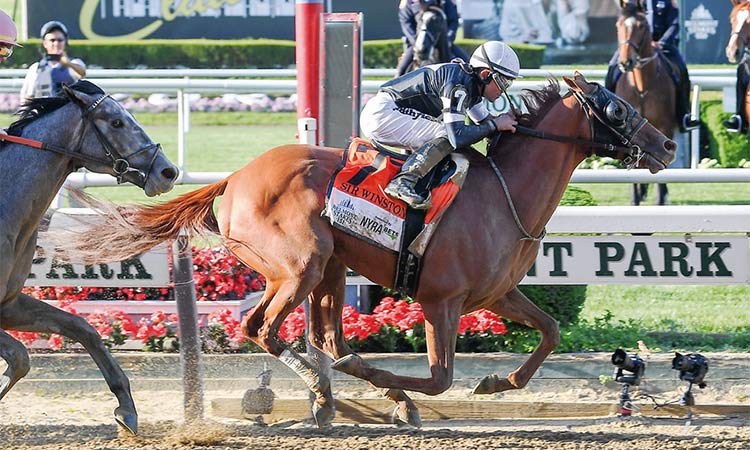 Jockey Joel Rosario rides Sir Winston (7) towards the finish line during the 151st running of the Belmont Stakes in Elmont, New York, on Saturday. Associated Press

Sir Winston held off the favourites by weaving through traffic from the inside rail to capture the 151st Belmont Stakes, the third leg of the Triple Crown on Saturday.

Sir Winston, ridden by Joel Rosario, at one point was hard on the rail but then made a wide move to the outside followed by a storming charge to the finish line. The winning time at Belmont Park was two minutes, 28.30 seconds.

Sir Winston, a 10-1 longshot, won for the third time in 10 career starts, beating out runner-up and pre-race favourite Tacitus and third place Joevia. Tax was fourth.

“He is a nice horse and I let him do his thing. I am very happy,” said Rosario.

The Belmont Stakes comes five weeks after this year’s controversial Kentucky Derby which was won by Country House after Maximum Security became the first horse in history to be disqualified from the iconic American race.

Country House, a 65-1 underdog in the Derby, did not race on Saturday due to a virus.

The win at Belmont Park capped a remarkable month for trainer Mark Casse, who had waited more than 30 years for his first win in a Triple Crown race before War of Will powered to victory in the Preakness last month.

War of Will, one of the favourites in the starting gate on Saturday, finished in ninth place.

Sir Winston’s victory run included passing just in front of War of Will to take the lead in the 1 1/2 mile race.

Joevia made good use of his No. 1 post position nearly going wire to wire before being passed by Sir Winston. Tacitus kept in contention by staying in the middle of the pack until the leaders rounded the final turn.

The five-year-old Helmet horse, trained by Saeed Bin Suroor and partnered as usual by Christophe Soumillon, was slightly slow into stride among the strong field of nine runners.

He recovered to race in sixth towards the inside before moving up fifth and made further progress to go fourth turning for home. The pace was fast – 22.17s for the first quarter-mile and 44.38s for the first half-mile.

Travelling conspicuously well, Thunder Snow, faltered momentarily on straightening up, but then knuckled down and was switched inside to go second to the winner Mitole.

He kept on well without getting grips with Mitole, who has now won seven races in a row, and just lost out on the runner-up position to fast-finishing McKinzie – the first three clear. The margins were three quarters of a length and a neck, while the race time came to a quick 1m 32.75s.

Bin Suroor was delighted with Thunder Snow’s first race since the horse became the initial dual winner of the $12-million G1 Dubai World Cup when running on gamely to beat Gronkowski by a nose in a thrilling finish to the 10-furlong dirt showpiece on Dubai World Cup night at Meydan in Dubai, UAE, on March 30.

The trainer commented: “Thunder Snow race a huge race and I am happy with him.

“He was up against some of the best American milers and will improve for the race.

“We will bring him back to England and prepare him to race in America again, with his target being the G1 Whitney Stakes (1m 1f, Aug. 3) at Saratoga.”

Elsewhere, a faultless performance by horse, jockey and training team added up to a 13th G1 win for Godolphin in 2019 when Trekking powered to victory in Saturday’s Stradbroke Handicap at Eagle Farm in Brisbane.

Trekking went into the Stradbroke as the best credentialled of Godolphin’s four runners and confirmed that status when he sprinted to the front at the 200m and kept up a strong gallop to win by a length and three quarters from Tyzone and Endless Drama.