War of Will and Tacitus duel for Belmont Stakes finale - GulfToday

War of Will and Tacitus duel for Belmont Stakes finale 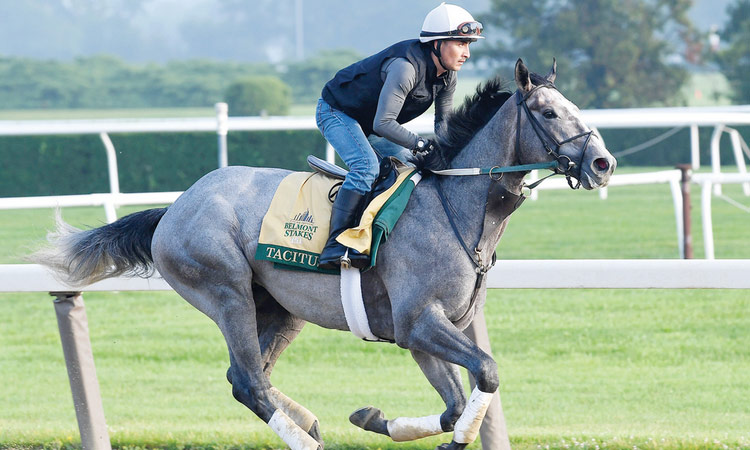 War of Will is chasing a Preakness-Belmont Stakes double on Saturday as the curtain comes down on US horse racing’s Triple Crown season in New York.

The Mark Casse-trained colt starts at 2-1 for the third leg of the Triple Crown at Belmont Park, three weeks after prevailing at Pimlico racetrack in Baltimore.

For the first time this season, War of Will has been given a favorable draw, starting from post nine in a field of 10 after being handed the inside rail at the Kentucky Derby.

A win at Belmont Park this weekend would cap a remarkable month for trainer Casse, who had waited more than 30 years for his first win in a Triple Crown race before War of Will powered to victory in Baltimore last month.

But Casse, who also has Sir Winston in the starting gate on Saturday, said he is not dwelling on the possibility of War of Will doing the double.

“I learned a long time ago to not think about that kind of stuff,” Casse said.

“Right now, the only thing I’m focusing on is getting there. There’s so many variables and so many things that can happen, that I just focus on the future.”

Casse believes War of Will is in peak condition for the event, having put on weight since the start of the season.

“We kind of know everyone in the field by now. I tend to just worry about my horses and not anybody else’s. If the pace is slow, he’ll probably be on the lead. If it’s quick, hopefully he’ll sit behind the pacesetters.”

In terms of pedigree, War of Will looks an obvious contender. He is the only Grade 1 race winner in the field, and the only horse contesting all three Triple Crown races this year.

“I think he’s got improvement in him,” Casse said. “I think he’s a better horse even than what you saw in the Preakness.”

The biggest challenge is expected to come from the highly rated Tacitus, who had been touted as a possible Kentucky Derby contender only to finish in third place after the disqualification of Maximum Security.

Belmont Stakes favorite Tacitus will try to defy history in the final jewel of the Triple Crown when he faces nine other three-year-olds. In the last 40 runnings of the Belmont, the favorite has won the race just eight times. That 20 per cent success rate since 1979 is well below the standard 33 per cent winning rate favorites have had in that span. On Tuesday Tacitus drew the No. 10 post and was installed as the 9-5 morning-line favorite in the 2019 Belmont Stakes odds. He is coming off a fourth-place finish in the Kentucky Derby (he was elevated to third after disqualification). Preakness Stakes winner War of Will is the 2-1 second choice. With favorites having less success than usual in the Belmont. Tacitus jockey Jose Ortiz pointed to the horse’s quick finish at Churchill Downs as an indicator that he would have plenty in the tank at Belmont Park, where he will start alongside War of Will on the outside.

“My horse ran a huge race,” Ortiz said of the Derby performance. “He was digging in late. I have no excuse, but we were a little unlucky because the pace didn’t collapse.

“In the Belmont, he will be much better running 1.5 miles,” said Ortiz.

New York’s Belmont Stakes is one of the crown jewels of US racing and represents the final leg of the celebrated Triple Crown — with Justify completing the treble in 2018. It’s a lucrative title in its own right, with $800,000 available to the winner, but victory at Belmont Park following twin triumphs in the Kentucky Derby and the Preakness Stakes in the same season accords the champion legendary status.

Only 13 horses have ever done it, but there will be no Triple Crown champion in the Belmont’s 151st running Saturday after one of the most controversial series in its long history.

It all began with the Kentucky Derby, where long-shot outsider Country House crossed the finish line second but was eventually declared the winner after second favorite Maximum Security was disqualified for interference.