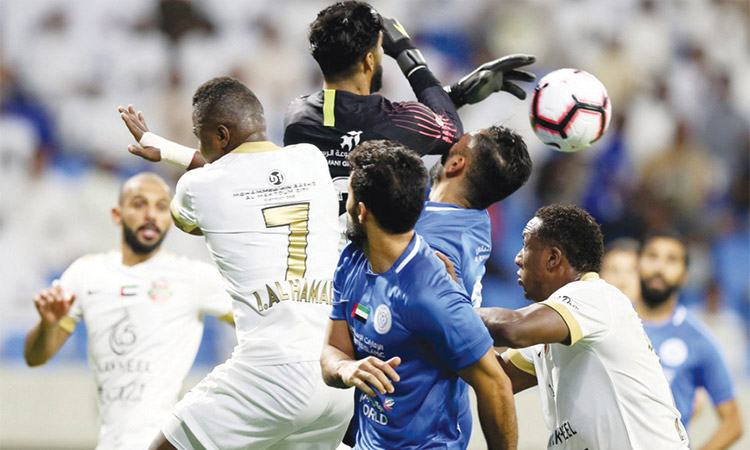 Players of Shabab Al Ahli and Al Nasr in action during their Arabian Gulf League match on Friday.

Shabab Al Ahli kept their consolidated their position on the number two spot as they beat Al Nasr 3-1 at Al Maktoum Stadium on Friday night.  Mohamed Marzooq opened the scoring for the guests after 12 minutes only as he headed home Emiliano Vecchio’s cross to put his side 1-0 up.

The guests doubled their lead on the 20-minute mark thanks to Ahmed Khalil’s free-kick from the edge of the box. He came close to adding his second of the night just moments before halftime, but his effort was saved by the Al Nasr keeper.

The hosts were dealt a huge blow as Mahmoud Khamis was sent off in the early stages of the second half for a second booking, forcing his side to continue the game with 10 men.

Al Nasr missed the services of another player in the 79th minute, when goalscorer Dutra was sent off for a second booking, which complicated the hosts’ chances of making a comeback.

Habib AlFardan missed a golden chance to score an equalizer as his penalty kick was saved by the Shabab Al Ahli keeper in the 89th minute. The guests capitalized on their numerical advantage as Henrique Luvannor added a third goal in the first minute of injury time to seal a 3-1 win.

Shabab now Al Ahli reached the 50-point mark and remained in second place. They are now only three points away from leaders Sharjah who have a game in hand. Al Nasr remained in eighth place on 30 points.

The Spanish forward gave the hosts the lead in the seventh minute before Abdulla Salem equalized around the half-hour mark. Conde completed his hat-trick with goals in the 50th and 62nd minute before Ahmed Amer reduced the deficit in the 87th minute.

Meanwhile, Fujairah earned a big 5-1 win over Al Dhafra, while Emirates Club suffered a 3-0 defeat against Al Jazira as the relegation battle intensifies.

Emirates and Fujairah are now tied on 18 points, in 12th and 13th places, respectively. Meanwhile, Al Dhafra remain in 10th place on 28 points, while Al Jazira remain third on 44 points, widening the gap with Al Ain and Al Wahda to four points.

The game got off to a quick start as Mohamed Benyettou opened the scoring for the guests after only two minutes. Fujairah were already 2-0 up after Fernando Gabriel doubled their lead on the 10-minute mark.

The Algerian forward completed his brace in the 19th minute to make it 3-0, giving his side a dream start to the game.

Only two minutes later, Nicolas Milesi reduced the deficit for the hosts. Ten minutes into the second half, Fujairah added their fourth of the night thanks to Ahmed Murad. Benyettou completed his hattrick six minutes from time to give his side a big 5-1 victory.

In the other game, Emirates looked to be headed for a draw against Al Jazira at Emirates Club Stadium, thanks to the hosts’ goalkeeper heroics.

However, their resistance lasted until the 73rd minute when Zayed Al Ameri opened the scoring for the Pride of Abu Dhabi with an effort from inside the box.

Nacer Barazite added the second for the guests only one minute from time, before Leonardo Pereira netted a third goal deep into injury time to seal the three points. 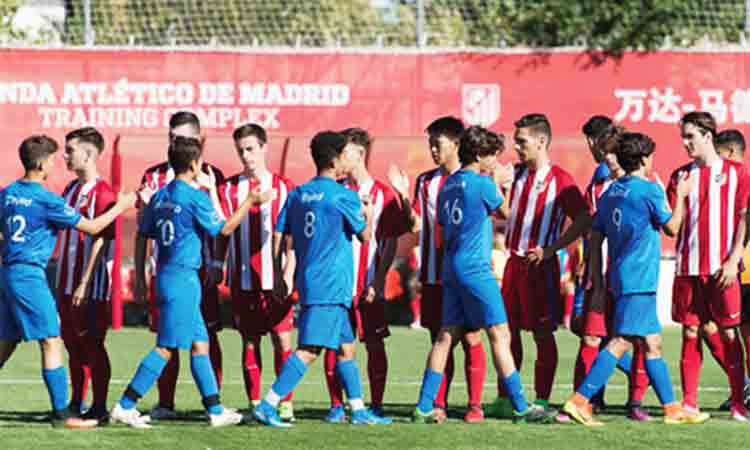