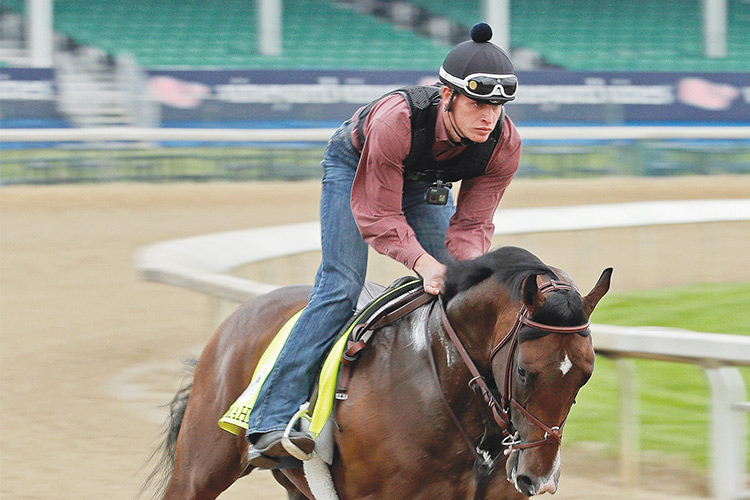 An exercise jockey rides Omaha Beach during a workout at Churchill Downs in Louisville, Kentucky. AP

Omaha Beach is the 4-1 early favorite for the Kentucky Derby after drawing the No. 12 post position on Tuesday.

Game Winner will start inside stablemate Roadster, the 6-1 co-third choice with Improbable, another Baffert colt who will go off from the No. 5 hole in the 1¼-mile race at Churchill Downs.

Omaha Beach is trained by Hall of Famer Richard Mandella and enters the $3 million showcase on a three-race winning streak. The dark brown colt is coming off a one-length victory in the slop over Improbable in the Arkansas Derby, a race that demonstrated his recent knack for getting up front quickly and staying there.

Mandella believes Omaha Beach and Hall of Fame jockey Mike Smith, who won last year’s Derby for Baffert aboard Justify, will make the most of his spot.

“It’s really important if you get luck with it,” Mandella said. “If you get a bad luck, a good post position doesn’t work.

“His last couple of races he kind of sits back and bides his time a little bit, then decides when to just cruise along. Mike will have to figure that out.”

Omaha Beach’s trainer Mandella is chasing his first Kentucky Derby victory after a career that has encompassed more than 1,750 victories.

“I’ve won some big races, but I haven’t won this one,” the 68-year-old Mandella said. “But I think we’ve got a pretty good chance this year.”

Omaha Beach comes into the race on the back of three straight wins, with his most recent victory coming in the Arkansas Derby on April 13, where he finished ahead of Baffert’s Improbable, who placed second.

Another Baffert-trained horse, Game Winner, was beaten in the Rebel Stakes on March 16.

Baffert, meanwhile, is going for his sixth Kentucky Derby win and second straight. He won last year with Justify, culminating in the Triple Crown. That came three years after he took the Triple Crown with American Pharoah.

It remains to be seen how the Derby will unfold hitting the first turn with so many horses vying for the same spot, but Improbable is in a relatively good spot.

Game Winner, who won the Breeders’ Cup Juvenile here last fall, and Roadster will have their work cut out for them, starting from post positions that are a combined 4 for 87 in the Derby. When it was noted that Roadster’s No. 17 post is 0 for 40, nervous laughter grew in a crowded room of horsemen including Baffert, his connections and the media.

Baffert later took all of his horses’ slots in stride, if only because none was on the rail. War of Will drew that unenviable spot and was given 20-1 odds as a result.

“I like the 16 hole, it’s a good spot,” he said of Game Winner’s position. “Roadster, he’s out there. I don’t know. I always get two horses together. A lot of times in California they draw so ... I’ll be watching those two leaving there.”

Points leader Tacitus will start from the No. 8 post with 10-1 odds as he tries to give trainer Bill Mott his first Derby victory. The son of Tapit and Close Hatches by First Defence has Grade 2 wins in the Wood Memorial and Tampa Bay Derby during a three-race surge.

Another 10-1 choice is unbeaten Maximum Security, who starts from the No. 7 hole and will try to follow up his victory in the Grade 1 Florida Derby.

Also eligible is 30-1 Bodexpress, who can get into the field with a defection.