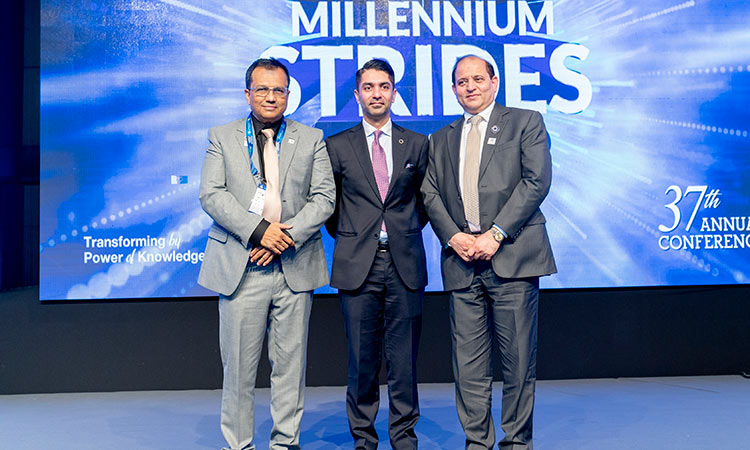 Bindra is the only Indian to have ever won a gold medal at the Olympics in any individual sport when he did the nation proud by claiming the yellow metal at the Beijing Olympics in 2008.

“I always say when you have heroes in any sport, it helps inspire the young generation to get involved with the sport.

“That is what we have been seeing in shooting off late. More people are taking up the sport as their career. We have a lot of young people who are doing very well. It is good to see 15-16-year-old shooters winning medals.

“And I do believe the future of the sport of shooting in India is very bright,” said Bindra, who was speaking on the sidelines of 37th Annual Conference of Institute of Chartered Accountants of India (ICAI), Dubai Chapter, NPIO. The theme of the conference was ‘Accelerating Millennium Strides.’

After Bindra’s Olympic feat, India saw a kind of surge in the sport of shooting as more and more youngsters took to the sports more seriously.

Gagan Narang and Vijay Kumar won bronze and silver medals in Men’s 10m Air Rifle and Men’s 25m Rapid Fire Pistol respectively at London Olympics four years later. It did not stop only there, Indian shooters put up a stellar show at the 2018 CWG, they brought more glory to the country.

A total of 27 shooters won 16 medals together, seven of them being gold, four silver and five bronze. That was the highest number of medals by any country in shooting.

Whereas in 2014 Glasgow Games, India contingent came home with 64 medals, 17 of them in shooting, which makes almost 30 per cent of the tally.

Commenting on the infrastructure and training facilities in the country, he said: “I believe a lot of changes are taking place in India, in terms of good amenities and infrastructure development for the sports in general.

“A lot of help and exposure is available to elite athletes now which is also now starting to trickle down to the grass-root level like ‘Khelo India’ programme, which is focusing primarily on the grass-root development. These are very good signs, But having said that we obviously have a long way to go and a lot needs to be done,” he informed.

“My beliefs are that the more we fund and the more we support at the grassroots level, it will only help develop athletes much more in a better way,” stressed the former Olympic champion.

Talking about the popularity of cricket as compared to other sports in India, Bindra sounded optimistic.

“In every country, there is one sport that is more popular and ours is cricket. But we are a very young nation with 70 per cent of demographic below the age of 35, which bring about big changes in the country. Youths are taking up other sports as well apart from cricket and things are changing fast. Cricket obviously continues to enjoy the popularity of being the number one mass sport, but people are focusing on other games as well and that will help us cultivate good results,” elaborated the ace shooter.

Bindra also exuded confidence in the youth to bring more glory to the country at the Tokyo Olympics in 2022. With out naming anyone in particular, he said he hopes to see a better tally at Tokyo.

“I am hopeful, India will many more medals at the Tokyo Olympics. There are many disciplines where we can excel like weightlifting, wrestling, shooting to name a few,” he stressed.

“No I don’t have any such plans of joining the politics,” he concluded.