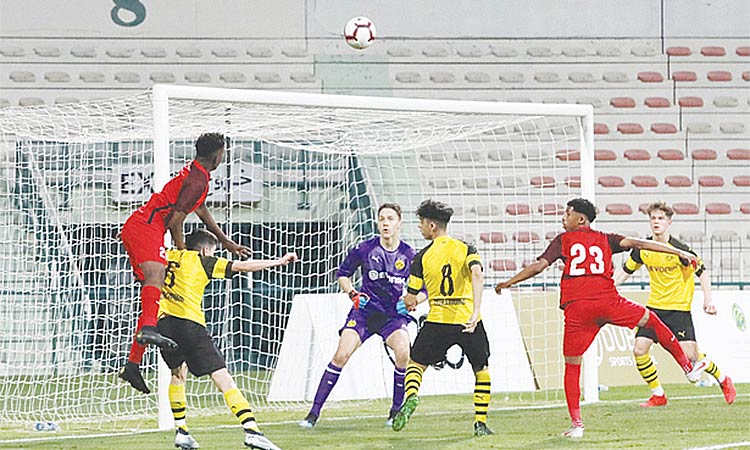 Shabab Al Ahli will be flying the UAE flag when the four semi-finalists of the 9th Dubai International Football Championship U-16 square off on Wednesday evening at the Maktoum Bin Rashid Stadium in Al Mamzar.

Shabab Al Ahli, who finished second in Group A behind 2016 champions Al Hilal of Saudi Arabia, will take on Brazilian powerhouses and defending champions Flamengo in the second match of the evening after the semi-final between Al Hilal and Atletico Madrid.

The Dubai club made the last-four at the expense of 2016 finalist Borussia Dortmund, holding the Germans to a 0-0 draw in the final group game, which decided the second semi-finalist from Group A.

The draw meant Shabab Al Ahli finished with four points, two more than Dortmund, while Al Hilal, who were held to a 1-1 draw by Al Wasl in their last match, topped the table with even points.

“Qualifying for the semi-final was our first objective from this tournament and we have ticked the box,” said Khalid Mohammed, the Shabab Al Ahli coach. “Reaching the last four, however, is not the end of our ambitions.

“We know we have a huge task ahead of us. Flamengo have looked unstoppable, both when they came here last year and again in the three matches they have played until now. They have scored 18 goals and have not conceded even one. That should tell you how strong they are.

“But every match is different and the result of our semi-final will be decided by how the team play in the 90 minutes on Wednesday evening. So we remain optimistic. Again, we know the challenge we face, but we will give it our best.”

Al Nasr also had a chance of qualifying for the last four, but they needed a win against Atletico Madrid in their final group game to make it to the knockout stages. The Spaniards, however, won the match 3-0 to book a semi-final with Al Hilal.

Meanwhile, Amer Belhasa, Chairman of Emirates Driving Institute Group and Vice Chairman of Belhasa Group, one of the strategic partners of the tournament, has urged motorists to show the same discipline and respect for rules as sportsmen show in competition.

“As a sportsman and enthusiast, I strongly believe that the qualities of a good sportsman are also those that go to make up a safe and responsible driver and we are delighted to share this opportunity to influence the behaviour of our young citizens wherever we can,” he said.

“At EDI, we believe that there is a very close relationship between sports and driving. Driving on our roads and playing sports share the need for skills such as anticipation, planning and timing with judgment of speed and distance, making quick decisions with fast reactions.

“A strong sense of fairness, respect for rules, courtesy and patients are qualities that are admired throughout sportsmanship and they also happen to be the corner-stones of safe, mature driving. Self-discipline and self-control are crucial components to both. There is absolutely no place for aggression, selfishness or rudeness, whether it is on a sports pitch or on the public road.”