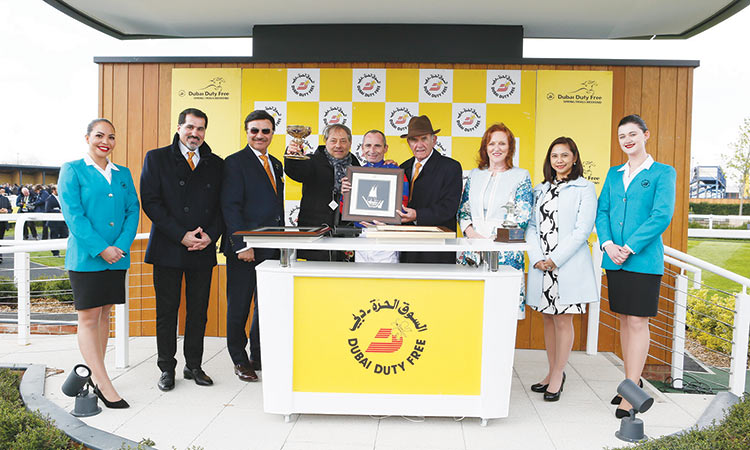 The Queen Elizabeth, in the week of her 93rd birthday and in the 66th year of her reign, graced day two of the 24th Dubai Duty Free Spring Trials Weekend at Newbury Racecourse on Saturday.

The Queen’s last winner at the meeting was two years ago when her homebred debutant Call To Mind took the Dubai Duty Free Tennis Championships Maiden Stakes. He went on to an important international victory at Belmont Park, New York.

On this occasion in Division 2 of the same mile race for three-year-olds, the Queen’s runner was Gold Stick, bred by His Highness Sheikh Mohammed Bin Rashid Al Maktoum, Vice President, Prime Minister and Ruler of Dubai, stable Godolphin.

And he ran on strongly to finish a commendable fourth to the Andrew Balding-trained odds-on favourite Raise You.

Division 1 of the Dubai Duty Free Tennis Championships Maiden Stakes had also been won by an Balding-trained colt, Fox Chairman. A 450,000gns yearling purchase Fox Chairman, though favourite before the race, has no fancy entries …yet.

Balding emphasised how pleased he is with his strong team of three-year-olds and much more will be heard of Raise You and Fox Chairman.

The Dreweatts Maiden Stakes for three-year-olds featured a pair of Royal colts: Pianissimo the odds-on favourite ridden by Frankie Dettori, trained by John Gosden, bred by Godolphin, and Queen’s homebred Space Walk trained by William Haggas. They delighted their owner with second and fourth finishing positions, though trumped by outsider Majestic Dawn.

Five races on the eight-race card were sponsored by Dubai Duty Free the first of which was the £60,000 Dubai Duty Free Finest Surprise Stakes Group 3 over a mile and a half. In a finish which saw racing at its most pulsating, globetrotting jockey Gerald Mosse being narrowly victorious on Marmelo trained locally by Hughie Morrison.

But the admirably consistent Marmelo is rarely seen at home – his previous run had been a noble second in Australia’s greatest race, the Melbourne Cup last November and before that the six-year-old had been victorious in Paris at Longchamp. Long term his objective is again the Melbourne Cup.

“We may go next to Epsom for the Coronation Cup,” said Morrison. “Though he stays two miles he is not a slow horse by any means and he deserves to be upgraded to Group 1.”

The One Thousand Guineas Trial, the £60,000 Dubai Duty Free Stakes Group 3 for fillies is a race the hugely successful Aidan O’Brien stable has never won. He sent a strong challenger from Ireland in So Perfect but she was narrowly beaten by Dandhu, trained by the veteran David Elsworth.

“She could go for the One Thousand Guineas but is also in the French Guineas,” he said. Dandhu was ridden to perfection by Gerald Mosse. “He may be French but we speak the same language,” said Elsworth: translated, the trainer meat they are both horsemen through and through.

The Watership Down Stud Greenham Stakes Group 3, won in the past by immortal star Frankel, was the intended reappearance of the Two Thousand Guineas favourite Too Darn Hot.  The sponsors own this exceptional colt but he was an absentee through slight injury.

“Mohaather loves this course,” said Tregoning saddling his best horse since Sir Percy. “Sheikh Hamdan and Angus Gold will sit down and we’ll discuss where we go from here with the Guineas the likelihood. He is a lovely laid-back horse with a beautiful action.”

Concluding the card and the successful meeting was the Dubai Duty Free Millennium Millionaire Handicap worth £12,000 and featuring a strong field of eighteen. Last year’s race was the last time Lunar Jet had got his head in front, narrowly, for trainer John Mackie who has a small string in the Midlands. This time the gamble was landed far more easily!