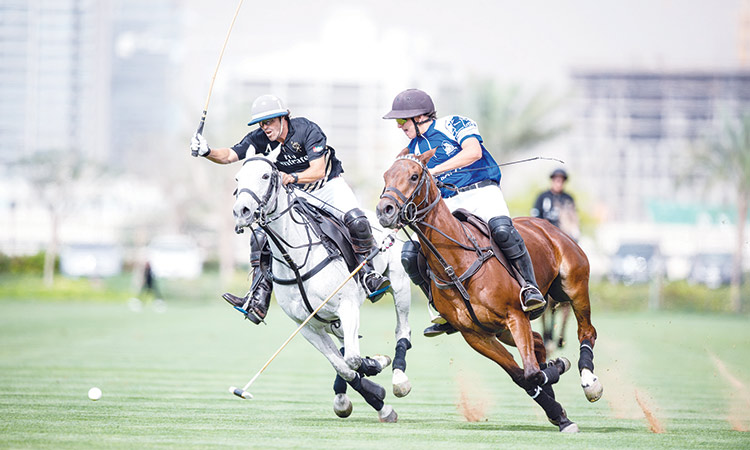 Kingpins Polo and Habtoor Polo players vie for the ball during a Dubai Cup match.

Dubai Cup, the fifth and final tournament of the Dubai Polo Gold Cup Series 2019, opened with a match between Kingpins Polo and Habtoor Polo followed by another game by the Dubai Wolves against Hesketh Polo team.

Habtoor had the lead from the first chukker, and the penultimate chukker defined the win for the team as it had a six-goal advantage on Kingpins. The first match declared Habtoor Polo team as its victors with a final score of 9 goals to 5.

The next game had a slow start the first goal of the game delivered at the second chukker by the Dubai Wolves and the team kept their lead up to the fourth chukker.

Hesketh Polo team tried to catch up on its opponent with successive goals on the last chukker and their last goal in by the time the buzzer sounded off.

The Dubai Cup, an 8 goal handicap tournament will continue on April 7, 2019 at the Al Habtoor Polo Resort and Club with a match between Abu Dhabi Polo and Kingpins Polo at 16:30 in Field 2.

Meanwhile, the annual Orphans Arabic Day, an effort led by Mohammed Abdullah Alhaj Al Zaroni, Manager of Emirates Red Crescent in Dubai, is aimed at providing a delightful experience for the children and this year, Al Habtoor Polo Resort and Club played host to the event.

The children were entertained by a magician and a face painter as they spent their afternoon on pony rides, bouncy castle, and a kiddie train.

They were also treated to a polo demonstration by Mohammed Al Habtoor together with professional polo players that rounded off the day meant for their enjoyment.

The Dubai Polo Gold Cup Series held in the UAE is one of only five tournaments in the world played in the WPT Championship Cup category, on a par with world-class events held in Argentina, Spain, United Kingdom and the United States. It was founded by its Chairman Mohammed Al Habtoor in 2009.

Earlier, UAE Polo team proudly lifted the trophy as the champion of the Dubai Challenge Cup 2019. The rainy afternoon started with the Subsidiary match between Dubai Wolves and Shansal/PBS with each chukker on equal footing, score-wise.

The Dubai Wolves earned their first three goals from Ahmed Al Habtoor and Justo Cuitino, while Shansal/PBS delivered consistent goals from each player and settled the penultimate chukker with a one and a half goal lead.