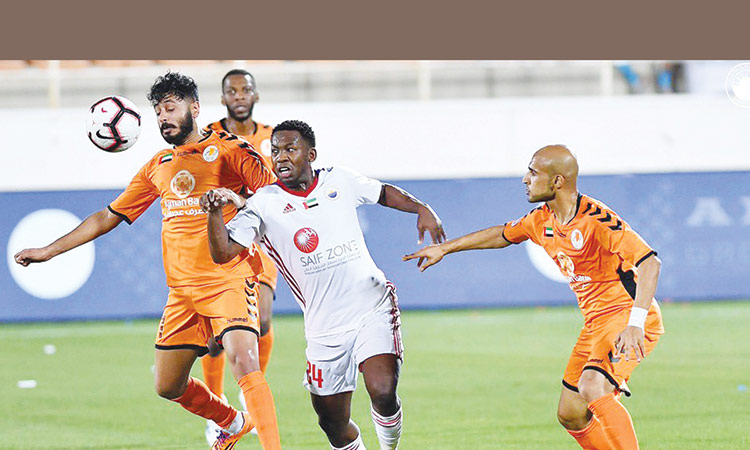 Players of Sharjah and Ajman in action during their AGL match on Thursday.

Shabab Al Ahli jumped to second place after earning a 3-1 win over Dibba in matchweek 19 of the Arabian Gulf League on Friday.

Shabab Al Ahli looked more dangerous midway through the first half, with attempts from Walid Abbas and Ahmed Khalil being saved by the Dibba keeper Abdulla Sultan.

The pressure and chances were eventually converted into goals when Mauro Diaz found the back of the net in the 35th minute. Following a defensive mistake, the ball fell to the Argentine midfielder who fired past Sultan to give his side a 1-0 lead.

As Shabab Al Ahli seemed to be taking a 1-0 advantage into the break, the Sailors levelled the scoreline. Yousef Al Rawashdeh found Yaseen Mahmoud’s cross inside the box before heading the ball through the keeper’s legs to net the equalizer two minutes before halftime.

The hosts started the second half in a different manner and went 3-1 up only 10 minutes after the restart.

Walid Abbas regained the home side’s lead five minutes into the second half. Following a defensive howler, Abbas slotted home to give his side a 2-1 lead.

Only six minutes later, Ahmed Khalil netted a third for Shabab Al Ahli to further extend their lead. Khalil’s free-kick deflected off a Dibba player before nestling into the right corner of the net.

Despite being 3-1 down, Dibba didn’t give up and kept fighting, hoping to reduce the deficit. However, Yasin Bakhit’s header was saved by Naser with 10 minutes to go.

To add insult to injury, the Sailors were reduced to 10 men in 88th minute, when Ahmed Ibrahim was sent off for a second booking.

Shabab Al Ahli now jump to second place on 38 points, while Dibba linger at the bottom on eight points.

Earlier on Thursday, Sharjah keeper Adel Al Hosani impressed as the King escaped with a 0-0 draw against Ajman at Rashid Bin Saeed Stadium.

The first chance of the game fell to Ajman’s Stanley Nka in the second minute, as he fired a powerful effort that was saved by Sharjah keeper Hosani.

Midway through the first half, Sharjah started to control possession but failed to pose real threat on the Oranges. Very few chances were created in the rest of the first half, as they headed into the break deadlocked at 0-0.

Ajman’s Mame Thiam came close to finding the back of the net just three minutes after the restart, however, his close-range header was brilliantly saved by Hosani. Stanley was denied again after going one-on-one with Alhosani on the one-hour mark.

The Oranges’ pressure continued, as they posed more threat on the King’s goal. In the 63rd minute, Sharjah’s forward Welliton pulled a goal-line save to keep the game goalless.

Ajman kept pushing forward until the final minutes of the game, hoping to give Sharjah their first defeat of the season. However, Hosani continued to impress as he saved Hussain Abdulrahman’s powerful effort in injury time to keep a clean sheet.

This marked the King’s fifth draw this season as they dropped two points in the title race but remained on top with 47 points.

The game started off in an electrifying fashion, when Leroy George released Michael Ortega with a defense-splitting through pass. The Colombian slotted the ball into the bottom corner to grab an early lead for Bani Yas just 16 minutes into the game.

George was once again at heart of attack for the Sky Blues, as he received the ball up the right wing, however, his cross was handled by Ahmad Malalla inside the box, compelling the referee to point to the spot and award the visitors a penalty kick. Pedro Conde sent the ball home from the spot to double the lead in the 34th minute.

Two minutes ahead of the break, Saber Khalifa pulled one back for Emirates as he smashed the ball into Fahad Al Dhanhani’s top corner, after capitalizing on Robson De Paula defensive howler.

The Falcons completed the quick comeback in the dying moments of the first half. Marcos Antonio brilliantly controlled Ali’s long-range miscued strike before finishing it calmly into the back of the net.

The hosts suffered a huge blow in the 50th minute, as they were reduced to 10 men after Abdulla Musa received a straight red card following his mistimed challenge on Haboosh Al Nofeli.

Around 14 minutes later, the Sky Blues capitalized on their numerical advantage. George grabbed his second assist of the night when he cut inside and sent an in-swinging left-footed low cross towards Al Hammadi, whose header crept into the bottom corner past Ali Saqr.

The Falcons tried to level things up in the remaining minutes, however, Bani Yas maintained a strong organized defensive display until the referee blew the fulltime whistle.