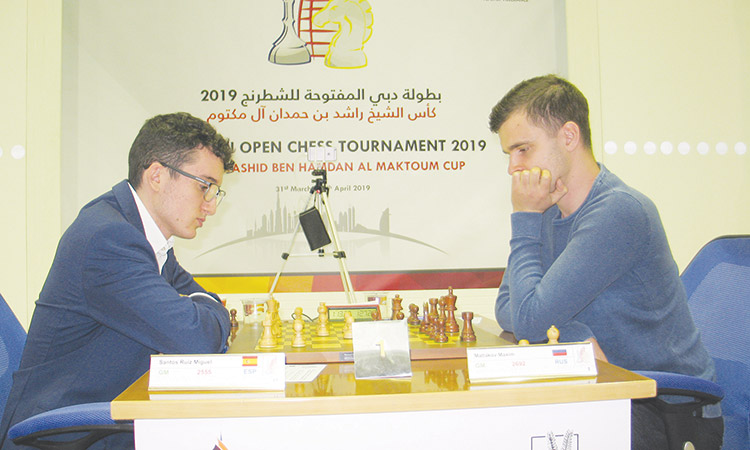 GM Miguel Santos Ruiz (left) contemplates a move against Maxim Matlakov during the fourth round of the Dubai Open Chess Championship.

Eighteen-year-old prodigy IM Raghunandan Kaumandur Srihari of India shares the lead with GM Aleksandar Indjic of Serbia with perfect 4 points each after as many rounds of the 21st Dubai Open Chess Championship at the Dubai Chess Club on Thursday.

Raghunandan used the King’s Indian Defense to upset GM Alan Pichot of Argentina. The Indian prodigy gained a Knight on the 26th move and was first to promote his pawn to Queen, forcing resignation on the 49th move. Raghunandan won the Asian Youth Under-12 championship in Iran in 2013 and earned his International Master title in 2016.

GM Aleksandar Indjic of Serbia, 24, crushed the Nimzo Indian defense of GM Kuybokarov Temur of Australia in 48 moves as the Aussie got his King trapped in the centre.

Le beat GM Vishnu Prasanna of India in 47 moves of a Closed Ruy Lopez game. Sethuraman outplayed WGM Tokhirjonova Gulrukhbegim of Uzbekistan in 46 moves of a Ruy Lopez Berlin defense. Deepan crushed the Sicilian Najdof of GM Emre Can of Turkeys in 32 moves.  Bilel won in 38 moves of a Ruy Lopez against FM Assaubayeva Bibisara of Kazakhstan.

On top board, Matlakov used the Slav defense to hold Santos to a draw in 47 moves. Yeoh and Kuzubov drew in 30 moves of a Four Knights game. The two Uzbeks drew after a fierce fight in 44 moves of a Sicilian.

Twenty three players follow with 3 points each, within striking distance of the $50,000 in cash prizes.