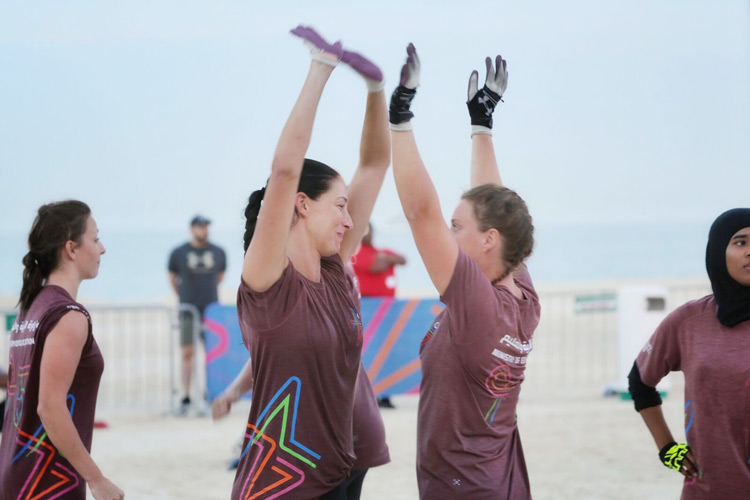 A women’s team celebrate their victory.

Teamwork made the dream work for UAE-based government entities during two thrilling women’s heats at Gov Games 2019, as the Emirates’ finest produced a clean sweep of all six spots for Saturday’s final showdown.

Marwan Bin Essa, Director of Games, said: “What an amazing display by our UAE women – they have made the entire country proud. We may not know which team will secure ultimate Gov Games glory, but it’s wonderful to know our UAE teams will dominate the podium.”

“It’s clear that our female teams have trained remarkably hard for this year’s Gov Games – both in terms of physical preparation and honing their communication and teamwork skills,” he added.

As thousands of spectators cheered on the home hopefuls in the second Gov Games, an initiative of His Highness Sheikh Hamdan bin Mohammed bin Rashid Al Maktoum, Crown Prince of Dubai and Chairman of the Executive Council of Dubai the UAE teams saw off saw off international teams from the USA, UK, Saudi Arabia, Bahrain, Thailand, Tunisia and Egypt to qualify for the final.

“What an amazing display by our UAE women – they have made the entire country proud. We may not know which team will secure ultimate Gov Games glory, but it’s wonderful to know our UAE teams will dominate the podium.

In Heat 1, first-time participants F3 displayed tremendous strength, unity and a calmness under pressure to take first place with an impressive score of 128.05 points. Communication and teamwork other paid off for F3, as they conquered many obstacles where their rivals fell short. After watching his team successfully finish the brutal Human Ladder 2.0 in under the allotted 10 minutes, F3 coach Ollie Turton was ecstatic.

“They’ve impressed me since day one,” said Turton. “Their attitude to every session was immense. I told them I was going to train them hard and they ran laps with 30-kilo vests, their hands ripped and bled three times a week. I pushed and pushed, but it’s made the girls really comfortable now. We did a lot of team-building exercises and I made sure they had fun as a team, which has clearly helped unify them. One thing that shone through was communication. I gave each person in the team a clear job on each obstacle - they were just really impressive and I’m really proud of what they’ve achieved so far.”

Teamwork led to the succes.

Thousands of spectators cheered on the home hopefuls in the second Gov Games.

A woman takes part in a daring activity.

Behind F3, the UAE Ministry of Education qualified from Heat 1 in second place to make the finals for a second successive year, with Dubai Tourism taking the third and final spot.

“We were in the finals last year and the climbing wall defeated us, so it’s very much settling unfinished business for us this year,” said Leanne Miles, the UAE Ministry of Education’s Team Manager. “Our experience last year taught us that tactics are important. Where possible we tried to plan ahead, use the team members as best as we could, play to our strengths, rest people, mix up the team. We’re back to win overall, but there’s some tough competition out there. It’s great to be a part of the Gov Games - it’s the best event in the UAE. A lot of the team take part in obstacle races around the UAE, but the Gov Games set-up is fantastic.”

The six UAE finalists will now go head-to-head in the Battleship – the 10th and final obstacle of this year’s Gov Games, which is dedicated to the final. The winning team will secure a Dhs1 million first prize, while the runners-up will receive Dhs300,000 and the third-place team Dhs200,000.