Belts on the line as Dubai readies for historic rumble - GulfToday

Belts on the line as Dubai readies for historic rumble 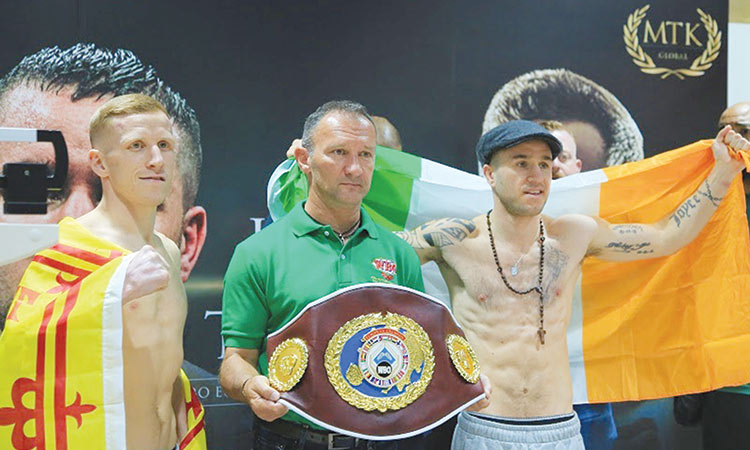 Weigh-ins take place ahead of the big night of boxing in Dubai on Friday. Supplied photo

Friday’s historic sold-out card in Dubai is one step closer as the fighters weighed in on Thursday ahead of ‘The Fight – DXB Uncovered’ to be held at Emirates Golf Club.

David Oliver Joyce and Stephen Tiffney clash for the vacant WBO European belt, with both men clocking in comfortably inside the featherweight limit ahead of their title showdown.

There is also a battle for the vacant WBC International super-flyweight title on Friday, as unbeaten Aliu Bamidele Lasisi takes on Ricardo Blandon.

Meanwhile, despite being tipped as a superstar in the making, ruthless Kazakh Sultan Zaurbek is keeping a level head as he prepares for Friday’s assignment.

The Shymkent super-featherweight has blasted to 5-0-KO3 and has already thrilled Sky Sports viewers but is determined to retain his identity amid the hype.

As he prepares to fight in front of a packed house, Zaurbek said: “I’m very happy to receive praise from big promoters but I won’t let it change me as a person.

“No matter how much attention I get, I will stay humble and appreciate every opportunity that comes my way. I came here as Sultan and I’ll carry on being Sultan.

“My goal this year is simply to earn a chance at a title by the end of the year. I want to have a shot and that’s what I’m preparing and training for this year.

“I’m very thankful for my team and I appreciate all the help and guidance they give me.

“I also want to thank my friend in London who helps me communicate. We all have a great understanding even though there are language barriers at times.

“I want to thank my team for all their help and I’m now waiting to put on a great show in Dubai. The win is ours.”

Along with 22-year-old Zaurbek, other MTK Global stars including Davey Oliver Joyce and Stephen Tiffney, who do battle for the WBO European featherweight title, Olympic champion Shakhobidin Zoirov, Australia’s huge-hitting youngster Mateo Tapia and many more will be vying for limelight.

All the while, undefeated knockout specialist Mateo Tapia is honoured to be representing both Australia and Mexico on Friday’s historic sold-out show in Dubai.

‘El Tijuanero’ (9-0-KO5) has already won a State title and fights outside Australia for the first time in his professional career on a busy bill that includes boxers from no fewer than 19 nations.

Ahead of taking on India’s dangerous Gaganpreet Sharma (8-1-KO4), Tapia said: “I’m very excited to be in Dubai. I’ve never been to this part of the world and to experience it at such a young age is just a blessing. I can’t wait to do the business.

“There’s always a good vibe in the gym. You’ve got characters like the Irishman Darragh Foley and he’s back with a couple of good wins. It’s always a good atmosphere with lots of different people around.

“The international feel of this Dubai card is amazing and you’ve got it live on ESPN+ so a lot of American and Hispanic, Latinos will be tuning in from around the world. There’s also the whole of the UK on iFL TV.

“My goal is now just to stay busy as a fighter. I’m still young but if titles present themselves then I’d like to fight for them. I still don’t know whether my optimum weight is middleweight or super-middleweight so we’re learning.

“I’m not sure what the plan is with regards to weight. I’m just going fight by fight at the moment and I’m enjoying it.”

Along with 20-year-old hopeful Tapia, other MTK Global stars including Davey Oliver Joyce and Stephen Tiffney, who do battle for the WBO European featherweight title, Olympic champion Shakhobidin Zoirov, Kazakh sensation Sultan Zaurbek and many more will be vying for limelight.