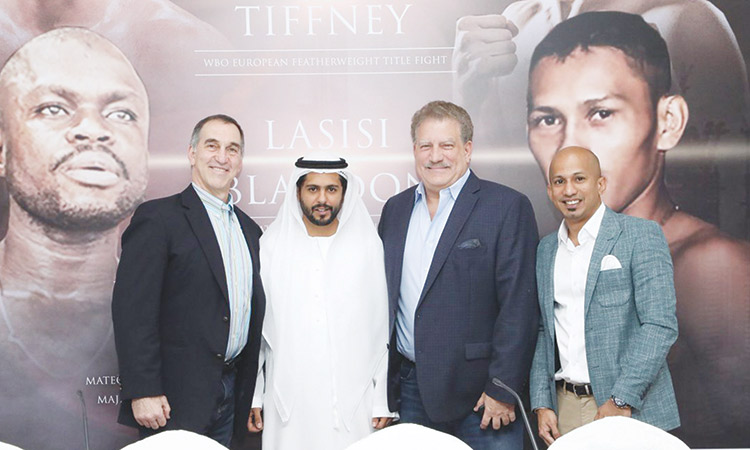 Dignitaries and organisers pose after a press conference in Dubai.

The Dubai-based Nigerian (12-0-KO8) faces dangerous Nicaraguan Ricardo Blandon (10-1-KO6) at Emirates Golf Club and is ready to put on a career-changing show for home fans.

Lasisi said: “It’s my dream to fight for a world title right here in Dubai one day. When I turned professional, all I said to myself was that I’m going to be a world champion.

“I started my boxing career here in Dubai so it’s my belief that it will be here that I achieve my dream. I have worked hard ever since I first arrived and now I’m ready to achieve what I set out to achieve. On Friday night, the people will see what I am capable of. This belt means a lot to me. In my weight category, it will get me lots of options. I’m so happy and glad to be fighting for it and I want to win it in front of all my fans.”

‘Kalashnikov’ (4-0), who joins several Round 10 Boxing Club team-mates and MTK Global stars on a busy bill at Emirates Golf Club, is still just 18 years of age but is already plotting a route to the top of boxing.

Ahmadi said: “Friday is such an exciting occasion - obviously for myself personally but also for the whole of the Round 10 Boxing Club team.

“This is a fantastic opportunity for Dubai boxing and Dubai in general to shine. There will be a big audience worldwide and everyone has a chance to show what they can do.

“The atmosphere at Emirates Golf Club is going to be absolutely electric and this is just such a huge and proud moment for Dubai boxing.

“Personally, since my last fight I feel I have improved a lot. My last opponent was strong but that strength faded when I knocked him out. Fans can expect another really entertaining fight from me here.

“I’m the youngest professional fighter from Afghanistan and God willing, I will inspire young boxers not just from my country but from all over the world. I want the best opportunities for all young boxers.

“One day, God willing, I believe I will be a world champion.” Joining Ahmadi on the bill from Round 10 Boxing Club is Aliu Bamidele Lasisi, who faces Ricardo Blandon for the WBC International super-flyweight title, Filipino star Larry Abarra, rising female force Anahit Aroyan and debutant Majid Al Naqbi.

At the same time, Philippines star Larry Abarra is bursting with pride as he prepares to clash with Raymond Commey on Dubai’s grand stage.

The Dubai resident (6-3-1-KO5) is a member of the flourishing Round 10 Boxing Club and will be well supported at Emirates Golf Club.

Abarra said: “I’m so excited. This is a dream come true for me and I’m honoured to be part of such a historic event. This is huge for the world of boxing.

“This is a proud moment for Dubai as a whole and Dubai boxing. It’s our time to shine. It’s my time to shine individually too and I’m going to give my best performance.

“I’m expecting some really exciting fights on the night from each boxer. There are so many from so many different countries and we’re expecting a big crowd.”