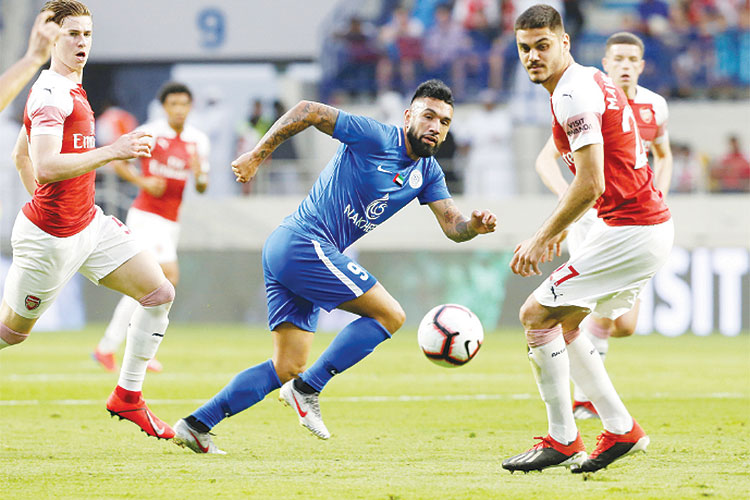 DUBAI: Carl Jenkinson, Alex Lacazette and John-Jules were on the target as Arsenal rallied to beat Al Nasr 3-2 in a friendly match at the refurbished Al Maktoum Stadium in Dubai on Tuesday.

For Al Nasr Ronnie Fernandez and Khalid Jalil scored a goal each in the 14th and the 90th minute respectively before referee blew the final whistle.

Fernandez broke the deadlock in the 14th minute to put Al Nasr 1-0 up. A brilliant finish from Fernandez saw the hosts taking the lead as he curled the ball into the net.

Five minutes later, Gunners got a chance to equalize through Jenkinson. Suarez bisected the Al Nasr defence to find Jenkinson, who fired in the equalizer to restore the parity. At half-time score was 1-1.

Earlier, Al Nasr played a firebrand football right from the word go as they came close to scoring their first goal through Saleh Al Hussain as early as in the fourth minute of the match when Arsenal goalkeeper Bernd Lendo made a save to defy him.

But Arsenal failed to keep a charged-up Al Nasr at bay for a long time as Fernandez found the net 14 minutes into game.

Before that, the Gunners also made a valiant attempt to open the scoring when Suarez tried to slip in a pass from captain Mesut Ozil, which was brilliantly saved by Al Nasr goalkeeper Ahmed Shambih.

There was a chance for Al Nasr to double the lead in the 37th minute when they were awarded a corner-kick. Masoud Suleman tried to intercept a pass from Mohammad Khamis but it was deflected well by Lendo.

Full-time goalkeeprer Petr Cech was called in after the half-time break by the Arsenal coach Unai Emery. He was as agile and alert as ever, saving everything that was directed towards him.

Star striker Alex Lacazette, who did not feature in the starting lien-up, was also called as the coach made his intents clear to try as many players as possible before their next assignment back home.

Lacazzete showed the stuff champions are made of as he gave Arsenal 2-1 lead in the 51st minute. He combined well with Ozil and slammed the ball left-footed high into the net.

Emery was on substitution spree as he wanted to give every player a chance before heading back to home. He made three changes in the 67th minute itself with Osei-Tutu replacing Ozil, Olayinka coming in for Gilmour and John-Jules starting for Lacazette.

However, Al Nasr spurned a chance eight minutes later to come from behind and equalizethe score in the  59th minute again. They managed to penetrate the defence but Suwidan was flagged for the off side.

Five minutes after coming on the field for Lacazette, John-Jules fired another goal to take the score to 3-1. He conned the goalkeeper with a dummy shot and then roll the ball into the far corner. In the dying moments Khalid Jalal scored another goal for Al Nasr to make it 3-2.

Meanwhile, such electrifying was the ambience at the stadium that every pass was cheered and every save welcomed. There was no dearth of support for the either side as the Arsenal fans also turned out in huge numbers to root for their favorite Premier League team.

Emery, who replaced long-serving coach Arsene Wenger last season, has done well with the Gunners since taking over the North London club.

Arsenal were thrashed 5-1 by leaders Liverpool at the end of 2018, but since the Gunners have notched up eight wins and a draw in their next 11 matches played.

Following their victory over Manchester United on March 10, Arsenal have provisionally moved into fourth overall in the Premier League standings with 60 points, just one shy of cross-city rivals Tottenham Hotspur (61), while Liverpool (76) and Manchester City (74) are headed for a mouth-watering race for the title, which looks set to go down to the wire However, with just eight rounds remaining in the league, Arsenal will have to be wary of no further slip-ups as Manchester United (58) and Chelsea (57) are keeping hot on their heels as they chase for the fourth spot and UEFA Champions League berth for next season with automatic qualification.

Arsenal’s next assignment after returning home will be against Newcastle United on April 1 followed by a visit to Goodison Park against Everton on April 7. 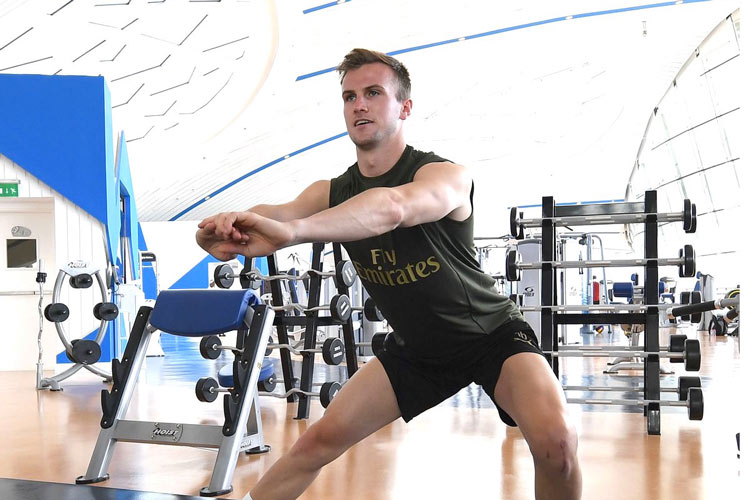