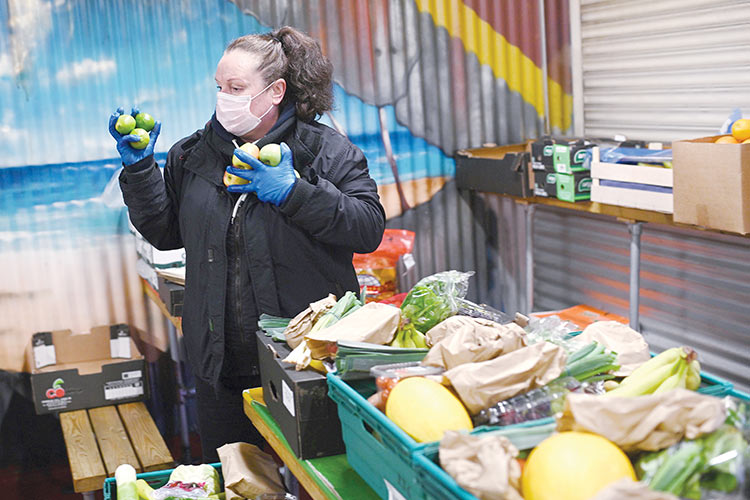 A woman shops for vegetables at a roadside kiosk in London.

British Chancellor of Exchequer Rishi Sunak has announced a 15 billion-pound relief package for stressed households grappling with a cost-of-living crisis because of higher energy bills, and a windfall tax of 25 per cent on energy companies to finance the relief package. Sunak argued that the energy companies were making huge profits because of the rise in oil prices, a fallout of the Russia-Ukraine war. He has however held out the hope that if the oil companies choose to reinvest their profits, then the tax would be tapered.

The more the companies reinvest the profits the lesser the tax they will pay. It has also been held out that this is a temporary tax and when the oil prices return to normal levels, the tax would be removed. Of course, the Conservative Sunak avoided using the term “windfall tax”, which is the favourite of the Labour Party policy mandarins. Sunak called it “a temporary targeted energy profits levy”. He said, “We will introduce a temporary and targeted energy profits levy but we have built into the new levy a new investment allowance that means companies will have a new and significant incentive to reinvest their profits. The more a company invests the less tax they will pay.”

The opposition Labour Party called it a ploy to divert attention from the scandal that Prime Minister Boris Johnson is facing over COVID-19-time parties at the prime minister’s official residence. “Labour called for a windfall tax because it is the right thing to do, the Conservatives are doing it because they needed a new headline.”

Britain like many other developed economies in the West is fighting raging inflation. The inflation rate in April stood at 9 per cent, a 40-year high. Sunak said, “The high inflation we are experiencing now is causing acute distress for people in this country, I know they are worried. I know people are struggling.” Economic experts seem sceptical about the effectiveness of the relief package. Said Paul Dales, chief UK economist at Capital Economics, a consultancy: “Overall, this support is much, much needed for millions of households. But it won’t relieve all the pain and may mean the Bank of England has to pull the interest rate lever harder to get on top of inflation.”

There was no agreement in the Johnson cabinet over the windfall tax because the prime minister was opposed to it, and Chancellor Sunak saw no other way to tackle the economic distress in the country.

The Ukraine war has become a good pretext to blame the economic crisis with the sudden surge in oil prices with the United States, the United Kingdom imposing economic sanctions against Russia in the wake of the Russian invasion of Ukraine on February 24. But the distress signals in the advanced economies like that Great Britain and the United predate the war, and they are more due to the COVID-19 pandemic disruption of 2020 and 2021, the enormous death toll it caused in these two countries, and the stress on the public health systems. The economic impact of the pandemic disruption has not yet been quantified.

There has also been a been an overall slowdown in the global economy. The tardiness is more than a decade old and it can be traced to back to the global financial meltdown in the Western economies. Policymakers and economic experts have not been to find ways to get out of what has been called the Great Recession. The world economy, and the free market economies in general, are in trouble. And the free marketeers are loath to admit that something has gone wrong in the market mechanism.

British inflation fell to the Bank of England’s 2 per cent target last month in an unexpectedly sharp slowdown that economists said was most likely a blip as the reopening of the economy after lockdown drives prices higher. Economists polled by Reuters had expected