Stop saying student debt relief is for the rich - GulfToday 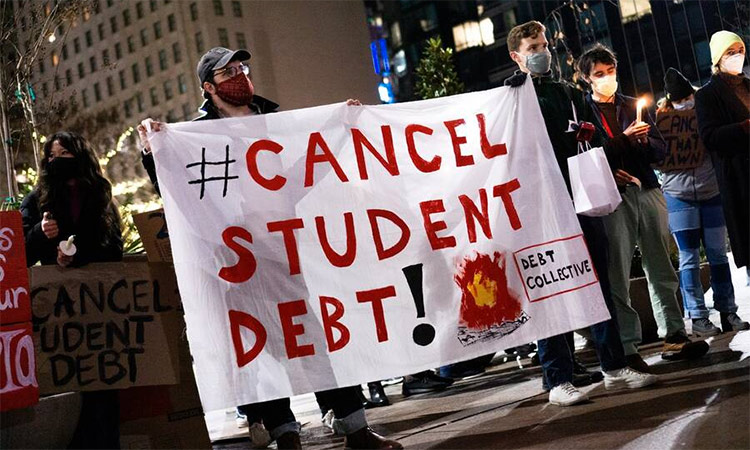 Students gather to demand cancellation of debt in New York.

When people debate whether to forgive some or all of the $1.75 trillion in student debt weighing on millions of American families, opponents often argue that it would be wasteful and unfair: Too many relatively well-off, well-educated people would benefit at the expense of all taxpayers, many of whom never had the desire or opportunity to attend college.

Reasonable as this might sound, it’s the wrong way to think about a policy that could actually do a lot of good, for both individuals and the broader economy. It relies on a misleading concept of who counts as rich, and ignores the extent to which the debt itself is a manifestation of unfairness. True, if one looks at the U.S. population by income, most student debt is owed by the highest-earning half of households. By one estimate, this group would receive about three quarters of the forgiven dollars (in present-value terms) if all the debt were canceled. This has led economists and politicians to label the policy “regressive.”

But this analysis is flawed on many levels. For one, it’s an inappropriate way to assess the policy’s regressivity: Social Security, the country’s largest safety net programme, can look regressive, too — until one recognises that low-income participants receive larger benefits compared with what they contribute in taxes.

In the case of student debt cancellation, income-based evaluation ignores people’s starting positions — the household resources that determine so much in life, including whether they can attend college debt-free. In the US, those starting positions differ radically, in large part due to a long and ignominious history of racism that has, generation after generation, prevented Black families from building wealth.

Consider the investments the government has made in education over the past century. After World War II, the G.I. Bill paid for the college educations of millions of returning solders — with the exception of Black veterans, whose access to benefits was severely limited. Before the Civil Rights Act ended legal segregation in 1964, many public colleges and universities were largely tuition-free. But the political will to subsidize higher education waned as Black, Latino and Asian enrollment rates rose.

Together with policies such as redlining, this fostered extreme disparities, in which White middle-class families accumulated the wealth to pay for a higher education, while Black families had to rely much more heavily on student loans to gain the college credentials that increasingly became a prerequisite for upward mobility.

As a result of such federally engineered inequality, otherwise similarly qualified and dedicated students graduate with very different debt loads, defined to a troubling extent by their race and family circumstances.

A 2016 study found that four years after earning a bachelor’s degree, the average Black graduate had about $53,000 in debt, nearly twice the level of the average White graduate. Some 91% of Black medical-school students emerge with debt, with a median amount of $230,000; the comparable figures for White students are 71% and $200,000. Even if income-based plans keep payments low, these debts stay on personal balance sheets for decades, preventing borrowers from starting businesses, investing in homes and engaging in other activities — such as nonprofit work or public service — that would augment their own and the nation’s prosperity.

Regressive tax policies aggravate the problem. Over the decade from 2021 through 2030, for example, federal and state governments are expected to spend more than $55 billion on programs such as 529 plans, which provide tax advantages to the most affluent households that can afford to save for college and have the resources to navigate the rules. By contrast, the government is forecast to spend less than half that amount on income-tax deductions for student-loan interest, which are capped at $2,500 a year — not so helpful for those Black medical-school graduates, whose interest payments might amount to more than $10,000 a year.

Efforts to address the student-loan burden have so far proven woefully inadequate. The Department of Education has rejected about 98% of applications to its Public Service Loan Forgiveness program. Participation in income-based repayment plans is stunted by confounding complexity, bad management, and predatory practices on the part of loan servicers. Ultimately, it doesn’t address the overwhelming balances.

The Biden administration has moved to cancel the debt of students preyed upon by unscrupulous for-profit colleges, but the amounts are tiny compared with the overall burden. Even outright default provides little relief, because student debt remains nearly impossible to discharge in bankruptcy.