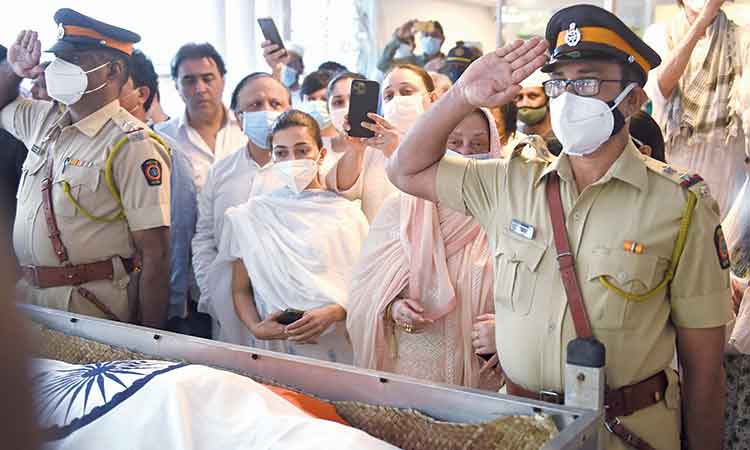 Indian police officers offer their respects to Dilip Kumar during the latter’s funeral ceremony in Mumbai on Wednesday. Associated Press

If death had had the luxury of breaks, it would have definitely taken one on Wednesday.

The king is dead. And he did commit a wrong. He left a slot empty forever.

The great Indian actor, Dilip Kumar, passed away in Mumbai on Wednesday morning. Dilip Kumar’s body, draped in the Indian flag, was accorded a state funeral led by a police band. He was buried in a Muslim graveyard in Mumbai.

Prime Minister Narendra Modi called Dilip Kumar “a cinematic legend.” “He was blessed with unparalleled brilliance... His passing away is a loss to our cultural world,” Modi tweeted.

Dilip Kumar was born Mohammed Yusuf Khan on December 11, 1922, in Peshawar, Pakistan, then part of British-ruled India. His father was a fruit merchant who took his family to Mumbai in the 1930s.

Dilip Kumar’s deep voice, extremely modulated syllables and an assortment of electrifying looks made him the monarch of all he executed in front of the camera. The ditched, the wronged, the funny, the fiery, the principled and the loveable made Dilip Kumar the actor’s actor and the audience’s obsession.

“He was the full range from sophisticate to primaeval, super-sensitive to crass and villainous to magnanimous,” a writer rightly said.

His physical vocabulary and dialogue delivery were never paltry before the demands of his craft.

In the sixties theatres used to print special tickets for a Dilip Kumar film. They used to be bigger and redesigned. I bought several of them in Calcutta. We stood in lines for hours to watch his film “Leader” and we will never regret that maniacal adoration. We did the same for his film “Sagina Mahato.”

The craze even didn’t spare our very own Amitabh Bachchan, who often stealthily moved out of his hostel in the night to see a Dilip Kumar movie.

Bachchan once remarked, “Exactly 20 years older to me by birth and exactly 2,000 years ahead of me in our common vocation. He is my idol and has been since the day I first saw his work.”

Bachchan isn’t alone when it comes to Dilip Kumar symbolising the ideal artiste. The handsomest of handsome stars Dharmendra said, “I watched a film of Dilip Kumar sahab and his onscreen aura just got into my mind.”

“I started imagining becoming a part of that world,” said Dharmendra.

He said no “one can even be a little bit of the shahenshah (Dilip Kumar) of acting.”

The list of admirers of the genius is long. Hear out Bollywood hit-machine Akshay Kumar: “To the world many others may be heroes. To us actors, he was The Hero. #DilipKumar Sir has taken an entire era of Indian cinema away with him. My thoughts and prayers are with his family. Om Shanti.”

The actor was humble and accessible.

One afternoon this correspondent and a film writer, after a lunch meeting with Ehsan Khan, Dilip Kumar’s brother, requested him to get an interview with the legend. Ehsan Khan directly phoned the actor. Generally one has to go through a secretary. Again, guess who answered the call, not a secretary. It was our sensational Purab Paschim and Victoria No. 203 heroine Saira Banu. She said very politely that it wouldn’t be possible because our icon was in the thick of his sleep. I didn’t give up. I tried again, but without luck.

The actor, who famously said films are made and not manufactured, was picky about his roles.

He turned down the chance to play Sherif Ali in David Lean’s 1962 classic “Lawrence of Arabia.” The part went to then little known Egyptian actor Omar Sharif.

Dilip Kumar really didn’t bother about criticism because he knew that viewers and not critics make or break stars. He was spot on because the box-office is a social verdict and review is one person’s intellectualised observation. Dilip Kumar inspired a whole generation of actors, including Bachchan as we just discussed. The latter remarked on Dilip Kumar’s 89th birthday: “It is a celebration for the greatest…He will turn 89 on December 11. His dedication to films shall be documented as before Dilip Kumar and after Dilip Kumar.’’

Bachchan added: “His strength of delivery and his strength of connect with any character he portrayed has been unique and unsurpassable.” 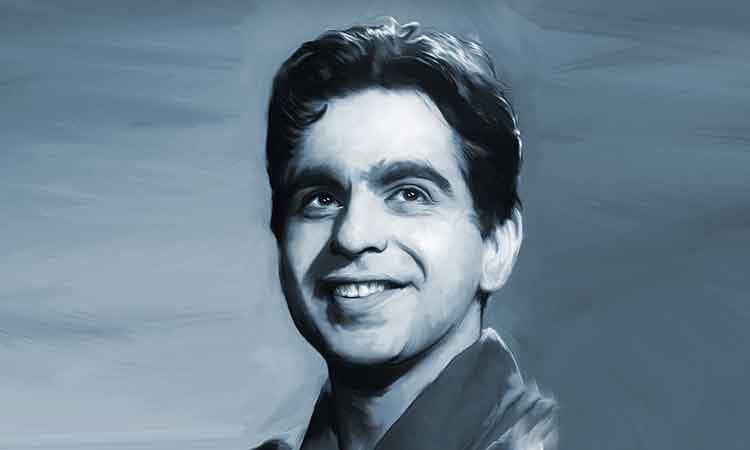 The screen persona of Dilip Kumar, who passed away on Wednesday in a Mumbai hospital at the age of 98, symbolised the hope and idealism of independent India’s Nehru era like little else in Hindi cinema did.