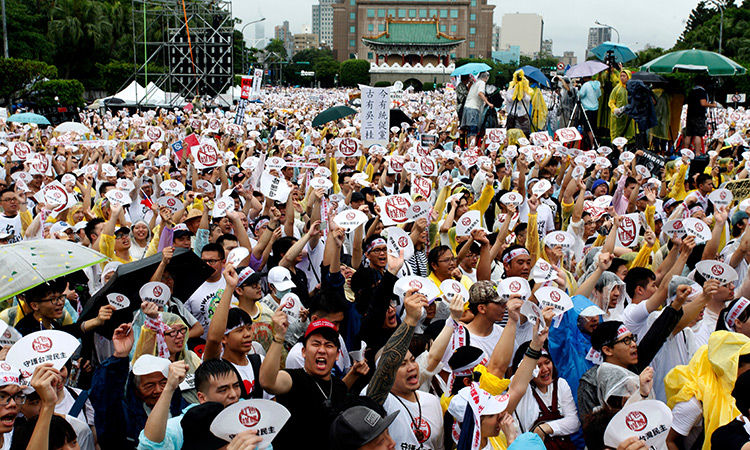 Protesters hold placards with messages that read “reject red media” and “safeguard the nation’s democracy” during a rally against pro-China media in front of the Presidential Office building in Taipei. File/Agence France-Presse

The messages start out as innocuous advice, often health-related, like: “Don’t eat mushrooms and eggplant together, or you may die.”

Then they turn political. “Taiwanese President Tsai Ing-wen’s PhD is fake.” “The CIA pays Hong Kong protesters $385 a day to go on the streets.” “Pro-democracy activists in Hong Kong and Taiwan are ethnically Vietnamese and Japanese.”

Thousands of lies flood social media every day in Taiwan, a new frontier of information warfare. Scholars say the island, which China claims as part of its territory but has been functionally independent since the 1950s, is the target of a Russian-style disinformation campaign by China to exploit social divisions and undermine democracy in the lead-up to the presidential election in January.

A recent study by the V-Dem Institute at the University of Gothenburg in Sweden found that Taiwan was the territory most exposed to foreign disinformation, based on weighted ratings by experts. The US ranked No. 13.

Last Friday alone, Facebook shut down 118 Taiwanese fan pages, 99 groups and 51 accounts, including at least one unofficial fan group with more than 150,000 members for Han Kuo-yu, the candidate of the Nationalist Party, who is seen as Beijing’s favourite. He is seeking to unseat Tsai, whose Democratic Progressive Party takes a more confrontational stance toward China.

Facebook told Taiwan’s Central News Agency that the accounts had been removed for violating the platform’s rules by artificially inflating their posts’ reach, and that the removal was part of Facebook’s efforts to protect Taiwan’s election.

Like other democracies, Taiwan has been struggling to contain the spread of false information via social media. Several nations, including Singapore and Vietnam, have passed laws to combat “fake news,” but advocates of human rights and press freedom fear that such bans are being used as a pretext to censor news and stifle speech.

In Taiwan, a bill prohibiting foreign “infiltration” of elections is stalled in the legislature, challenged by critics who say it brings back memories of the “White Terror,” a nearly four-decade period of martial law period that ended only in 1987.

Instead, Taiwan’s government is relying on private citizens to check facts and promote media literacy.

In a small office tucked inside a TV broadcast building, four former journalists recently pored over social media posts for the Taiwan FactCheck Center, a nonprofit group that started collaborating with Facebook in July 2018 to debunk disinformation on Taiwanese pages. The center is supported by two private foundations and is not funded by any government, political party or politician.

(Facebook says it similarly works with third-party fact-checking organizations in a number of countries, including the US. But when posts are marked false in most countries, they simply get moved lower in the news feed so that users see it less prominently. Fact-checking reports are also added as “Related Articles” connected to the false posts, Facebook says.)

In Taiwan the fact-checking team is small. It takes days to research and publish a full debunking report. The work is Sisyphean: The center has published 214 reports so far, but thousands of fake-news posts show up daily on Facebook and Line, a popular messaging app. Many appear in private chat groups that the center cannot monitor.

“This is just a beginning,” said Summer Chen, the center’s editor in chief, acknowledging the challenge.

Chen sees parallels with the disinformation campaigns used by the Russians to interfere in American elections. Some accounts and pages lure readers with seemingly innocuous information, then suddenly switch to political messaging.

Other posts try to stir emotions on hot-button issues — for example, false claims that Tsai’s government has misused pension funds to lure Korean and Japanese tourists to make up for a drop in visitors from the mainland, and that organizers of Taiwan’s annual gay-rights parade received stipends to invite overseas partners to march with them.

“They see a crack and stick a needle in,” Chen said, citing a Chinese proverb to explain disinformation that exploits social divisions.

The provenance of some slanderous posts is barely concealed. One false post, for example, claimed that pro-democracy protesters in Hong Kong had been offered money to kill police officers in suicide attacks. Chen’s group traced its first appearance to a post on Weibo, a mainland Chinese platform, by an official account belonging to China’s Central Political and Legal Affairs Commission.

Fact-checkers also noted that the posts were accompanied by a fabricated poster claiming to recruit “martyrs.” But the name of the supposed martyrs’ chat group was written in Mandarin phonetics, rather than in Cantonese, the dialect spoken in Hong Kong.

Content analysis is one method analysts use to discern whether disinformation is coming from China, said Puma Shen, head of DoubleThink Labs, an organization that tracks Chinese disinformation and influence networks in Taiwan.

Timing can also be a giveaway, Shen said, as when clusters of accounts post and share content at the same time, between the same hours every day.

Proving whether such “coordinated inauthentic behaviour” is linked to the Beijing government is harder. But there are clues: When Twitter shut down 936 mainland Chinese accounts targeting Hong Kong protests with disinformation in the summer, it found that several originated from internet addresses in mainland China that can access Twitter without a virtual private network — which strongly suggests that they were state-controlled accounts.

Yet Taiwanese society remains undecided on whether Chinese disinformation is a threat, or even real.

In a survey of voters in November 2018, a week after local elections in Taiwan, Wang Tai-Li, a journalism professor at National Taiwan University, found that 52% of respondents did not believe there was foreign interference in the elections, or did not know enough to judge.

It doesn’t help that Taiwan’s media landscape is severely polarised, with poor fact-checking standards and a high emphasis on entertainment over factual, neutrally presented news. Politicians from both of Taiwan’s major parties have also used trolls and cyber armies to influence voters as elections approach, Wang said.

That unsure, confused segment of Taiwanese society is most susceptible to foreign influence — and most in need of media literacy training, Wang said. “Disinformation works on people in the middle, the politically neutral.”

On a recent Sunday afternoon, about 20 volunteers filed into a co-working space in Taipei, the Taiwanese capital. Pop music played as they snacked on egg tarts and opened their laptops, typing reports for CoFacts, a crowdsourced fact-checking database. Users can send queries to a CoFacts chatbot on Line about suspicious messages, which generates prewritten responses debunking the false claims.

Johnson Liang, the founder of CoFacts, acknowledged that it was hard to change the minds of people deceived by disinformation, but he said that the chatbot at least provided alternative viewpoints to consider.