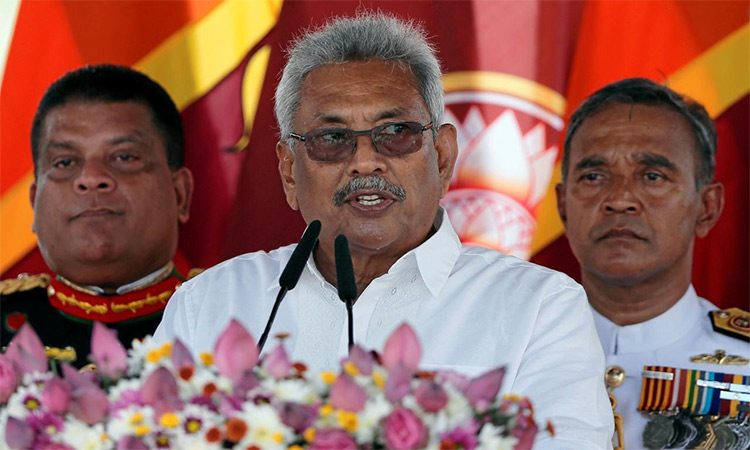 The swearing in of Sri Lanka’s new President Gotabaya Rajapaksa has drawn cheers from his core supporters, but has also raised worry among minorities.

Rajapaksa is the latest nationalist leader to sweep to election victory, tapping into the anger and fears of majority communities.

Nicknamed “The Terminator” within his own powerful political family, the 70-year-old former defence chief made security his top campaign issue for a nation traumatised by the Easter bomb attacks by militants earlier this year.

Saturday’s election saw the country’s Tamils, who account for about 15 per cent of the population, vote overwhelmingly against Rajapaksa.

It is good that in his first comments after defeating Sajith Premadasa, a housing minister in the current government, Rajapaksa struck a conciliatory note, suggesting that he would be leader of all Sri Lankans, regardless of their ethnic and religious identities. Such healing words should be followed by real action.

“As we usher in a new journey for Sri lanka, we must remember that all Sri lankans are part of this journey. Let us rejoice peacefully, with dignity and discipline in the same manner in which we campaigned,” Rajapaksa said in a tweet.

Muslims, the other large minority group, say they too have faced hostility since the April attacks on hotels and churches. Such genuine concerns should be addressed.

Rajapaksa has made it clear that he will maintain Sinhala and Buddhism as the country’s primary culture and provide them with state support, but will allow other groups to preserve their religious and cultural identities.

Some 70% of Sri Lanka’s 22 million people are Buddhist Sinhalese, 14% are Tamil Hindus, Muslims make up 10%, while the rest are Catholics and other religions.

Another major challenge facing the new president is to lead the country out of its deepest economic slump in over 15 years, dragged down by its tourism sector following the April attacks on hotels and churches in which more than 250 people were killed.

During the campaign, Rajapaksa promised to cut the 15% value added tax by nearly half and abolish some other taxes, as a way to reignite consumption and growth.

These cuts could lead to a loss of more than $3.31 billion in tax revenues, adding to the pressure on public finances at a time when the country is under a $1.5 billion, four-year IMF loan programme.

On another front, the UAE has remained a true friend of Sri Lanka and the bilateral relations have remained robust.

The UAE is the sixth largest source of the Foreign Direct Investment, FDI, inflows to Sri Lanka, and its largest trading partner in the Middle East with bilateral trade representing more than half of the country’s total trade with the region, Ravinatha P Aryasinha, Sri Lankan Foreign Secretary, informed Emirates News Agency, WAM, recently.

There was a quantum leap in bilateral trade exchanges between Sri Lanka and the UAE, with 62.92 per cent increase during the past three years.

During 2015-2017, Sri Lanka received $593 million in FDI from the UAE, which represented 6.1 per cent of the total FDI inflows to the country during that period.

With major challenges lined up for Lanka’s new president, one hopes right decisions are taken to keep the nation on the road to peace and prosperity.