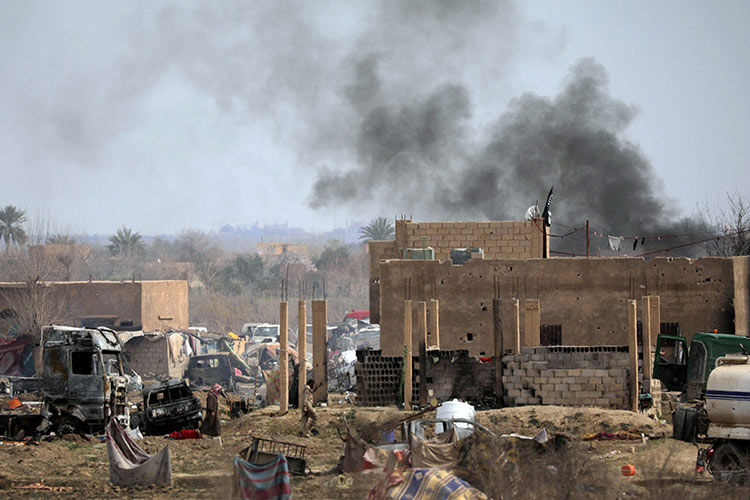 Trump-administration driven Western sanctions are blocking the massive reconstruction aid and investment Syria needs to rebuild. Syrians refer to the present phase of the conflict gripping their country as “economic warfare.” Fuel, raw materials for manufacturing, medical supplies and banking access are blocked under the punitive sanctions regime. The Syrian currency is falling in value and fluctuates daily. Governments which impose sanctions claim the Syrian people are not targeted but this is a lie. The rich pay for their comforts, the middle class and the poor struggle. But Syrians survive with dignity and a sense of pride. They resist sanctions and challenge the Trump administration and its allies with “mouneh.”

A shopkeeper in the war-devastated, former resort town of Zabadani west of Damascus tells Gulf Today that August is a hard month for families: “Before the end of the month, their money has been spent on vegetables and fruit and supplies for children returning to school.”

My friend Dr Maamoun says, “Summer is the mother of poor Syrian families because the climate is fantastic for the production of all vegetables and fruit. Four or five kilos of tomatoes or courgettes cost $1 (Dhs3.67). Summer is long and they do not need heat for their homes. Electricity and water are cheap. Education is free. We keep hope in our hearts despite all difficulties and look to small things.”

Before the war, Zabadani — located in the Qalamoun mountains west of the capital — was a prosperous agricultural and resort town. Damascenes visited in summer to enjoy cool weather, in winter to see the snow. In early 2012, Zabadani became the first town to fall under the control of the Turkish-sponsored Free Syrian Army (FSA), comprised of military defectors and foreign and local gunmen. The radicals — Daesh, al-Qaeda’s Jabhat al-Nusra, the Army of Islam and Ahrar al-Sham — soon followed and there were off-and-on battles for control of Zabadani and nearby Madaya until 2017. Today, Zabadani’s homes are shattered, its streets are perfumed by rotting garbage and mired in water leaking from broken pipes.

“The stupid people of Zabadani invited (the insurgents) in,” stated Karim Haj Hamoud, a man from Zabadani whose family owned clothing shops in both Zabadani and neighbouring Bloudan. The Zabadani shops have gone but the Bloudan shop stocks fashionable Syrian-made women’s clothing. His family fled the fighting like the majority of the residents of Zabadani, some 20,000 to Bloudan, others to Damascus, the Bekaa in Lebanon or Europe.

From the main street in Zabadani I spotted three women sitting on the steps of a house up a low hill. I asked them to tell me their stories. As we climbed the stairs I noticed that the front veranda of the battered house, enclosed in plastic sheeting, boasted colourful plants, indicating these householders were back at home and getting on with their lives. Amineh Bou Aish, 68, invited me into her sitting room. A handsome lady, her pink face framed in a white hijab, Amineh said, “Thank God, the situation is getting better. We left the house for seven years. When we heard Zabadani was open we came back. Some walls of the house had collapsed from bombs. I lost my husband during the war when he was returning to check on the house and our land. He was travelling between Madaya and Zabadani and was killed. We do not know what happened to him. We lost our apple trees. They were cut down. The house was looted.” Nevertheless, Amineh declares she is a farmer.

Two sons went to Lebanon and send money to help Amineh and her three daughters. One daughter is married and has a boy and a girl, two are not married. Her grandson, Malek, has light blue eyes: “From his uncle,” stated Amineh. He is in the fifth grade and is eager to return to school. Six people live in the room where we are sitting. It is both a salon and a bedroom. The holes in the walls punched by mortars have been repaired and new windows installed. Mattresses are ranged against two walls, chairs near the door. A fan cools the room; kitchenware is stored in a cupboard. Electricity is three hours on, three hours off; Friday and Saturday are without cuts. Before the war, the family lived in four large rooms. She showed me the unrepaired rooms, once handsome with moulded ceilings, now used for storage. Mouneh is in abundance.

Amineh’s friend and neighbour, Fatieh Tinawi, brings coffee and walnut pastries. She and her family fled the war for Lebanon and have been back home for only seven months. Her husband is a stone and marble mason who was employed in Lebanon. “Our house rent was $300 (Dhs1,100) and expenses were high. I missed my home,” she stated. “All the people want to come home.” She displayed her eggplant mouneh, hollowed out and ready to be stuffed with garlic, nuts, chillies and herbs. She has a huge fridge freezer brought from Lebanon, all its compartments filled with food. Mint was drying on a tray on the floor, dried figs were piled on a platter on the kitchen counter. They have reclaimed three rooms. Her husband worked for three months but has been out of work for four. He waits for reconstruction to overcome sanctions and begin. Meanwhile his family, like millions of others in Syria, will depend on mouneh.