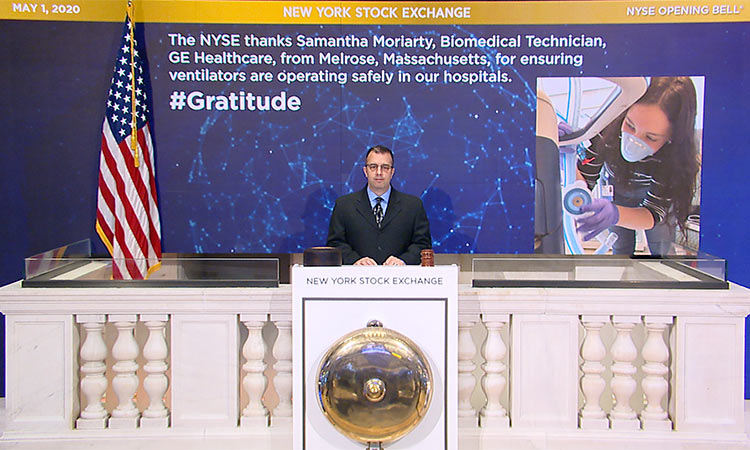 Trump said late on Thursday his trade deal with China was now of secondary importance to the pandemic, as his administration crafted retaliatory measures over the outbreak.

The threat pulled attention back to the trade war between the world’s two largest economies that has kept global financial markets on tenterhooks for nearly two years.

“It will not be easy to repair corporate carnage after this perfect storm,” said Peter Cecchini, chief market strategist at Cantor Fitzgerald in New York.

“The trade war mattered because the stress was not with the consumer this time; it was within companies’ balance sheets.” The S&P 500 technology sector shed 1.5% in early trading, while the trade-sensitive Philadelphia Semiconductor index fell 4%.

The consumer discretionary subindex also came under pressure after Amazon.com said it could post its first quarterly loss in five years as it was spending at least $4 billion in response to the coronavirus pandemic. The e-commerce giant’s shares tumbled 6.3%.

Apple Inc’s Chief Executive Officer Tim Cook said it was impossible to forecast overall results for the current quarter because of uncertainty created by the virus after the company reported sales and profits above expectations.

With nearly half of the S&P 500 companies having reported results so far, analysts expect a 14.4% fall in profits for the first quarter and foresee an even sharper decline of nearly 37% for the current quarter.

However, aggressive stimulus measures and hopes of reopening the economy from virus-induced curbs helped the S&P 500 index post its best month in 33 years in April. The benchmark index is now 18% away from reclaiming a record high hit in February.

US manufacturing activity plunged to an 11-year low in April, supporting analysts’ views the economy was sinking deeper into recession. However, the Institute for Supply Management’s (ISM) index reading of 41.5 last month was a smaller than the expected drop to 36.9.

“Markets have already moved beyond analysing the anticipated immediate collapse in economic activity to focusing on the duration of it,” said Binay Chandgothia, portfolio manager at Principal Global Investors in Hong Kong.

“While there are some initial signs of stabilization in indicators that have already dropped precipitously, markets would like to see continued progress - moving from a stabilization phase to a recovery phase.” United Airlines Holdings Inc slipped 8% after posting a first-quarter loss of $1.7 billion.

Oil rose further above $26 a barrel on Friday as Opec and its allies embarked on record output cuts to tackle a supply glut due to the coronavirus crisis that has been weighing on the market.

US Treasury yields inched higher on Friday after data showed the nation’s manufacturing activity plunged to an 11-year low in April as the coronavirus outbreak hurt supply chains.

The benchmark 10-year yield was last up 1.7 basis point at 0.6418%. The Institute for Supply Management (ISM) reported its index of national factory activity dropped to a reading of 41.5 last month from 49.1 in March. Otherwise, the market was largely sidelined ahead of US Treasury announcements next week, including how much the government plans to borrow to finance stimulus measures aimed at combating the fallout from the outbreak.

Meanwhile, the Chinese yuan fell to a one-month low versus the dollar on Friday, a day after US President Donald Trump accused China of mishandling the outbreak of the novel coronavirus and threatened new tariffs on Beijing.