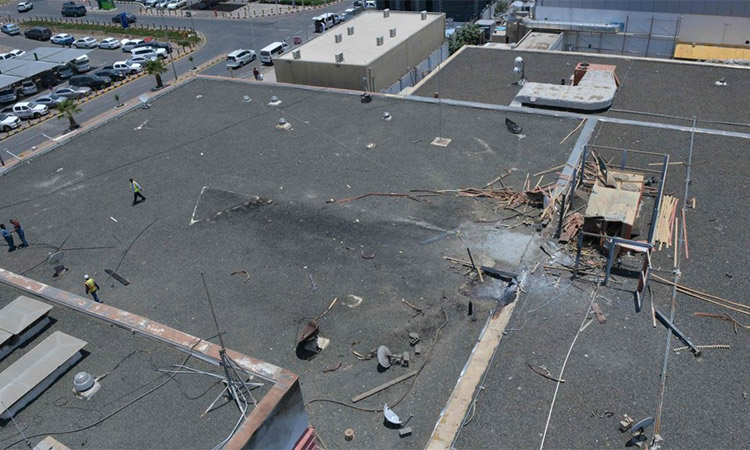 A view of the Abha International Airport hit by Houthi militias attack . Reuters

The terrorist attack on Abha International Airport in Saudi Arabia by the Iranian-backed Houthi militias that resulted in the death of one person and injuries to several others is yet another cowardly and dangerous act that deserves a strong international response.

The Joint Command of the Coalition Forces has already made it clear that it will take urgent and timely measures to deter this terrorist militia and ensure the protection of civilians and their properties.

The repeated and premeditated targeting of civilians and civilian infrastructure in Saudi Arabia with ballistic missiles and drones makes it absolutely clear that the Houthi militia is a terrorist group that does not hesitate to commit crimes against humanity.

The recent designation of the Houthi militia as a terrorist group by the Arab Parliament has thus been proved to be a fitting step and the United Nations should immediately follow suit.

As Colonel Turki Al Malki, official Spokesman for the Coalition to Restore Legitimacy in Yemen, pointed out, the Iranian-backed Houthi militia claimed full responsibility for the attack through its media, saying it used unmanned aerial vehicle ‘Ababil’, which constitutes a clear recognition and full responsibility for targeting civilians and their properties that are subject to special protection under international humanitarian law. Thus, it could amount to a war crime.

The continuation of such terrorist acts with high-quality capabilities unambiguously proves the Iranian regime’s involvement in supporting the Houthi militia and the continued violation of the relevant UN Security Council resolutions, including Resolution 2216 and Resolution 2231.

The UAE Ministry of Foreign Affairs and International Cooperation (MoFAIC) has rightly stated that the terrorist attack flies in the face of all international laws and conventions.

The attack offers evidence of the Iranian-backed Houthi militias’ hostile and terrorist tendencies to undermine security and stability in the region.

The Kingdom of Saudi Arabia, UAE, United Kingdom and the United States of America have together expressed their concern over the escalating tensions in the region and the dangers posed by the Iranian destabilising activity to peace and security both in Yemen and the broader region, including attacks on the oil tankers at Fujairah on May 12 and in the Gulf of Oman on June 13.

Iran should heed the four countries’ call to halt any further actions that threaten regional stability and opt for diplomatic solutions to de-escalate tensions.

As the Quad countries noted, the Yemeni parties should participate constructively in the joint Redeployment Coordination Committee to accelerate implementation of the Hodeidah Agreement, which includes agreeing the Concept of Operations and tripartite monitoring, as well as engaging constructively on local security issues. The Houthis should withdraw fully from the ports of Hodeidah, Ras Issa and Saleef.

Dr Anwar Bin Mohammed Gargash, UAE Minister of State for Foreign Affairs, well highlighted the situation by tweeting recently: “The split nature of the Houthi militias is evident; playing a local role when negotiating a political process in Yemen & puppets & proxies when targeting Saudi civilians. A position complicating the Yemen crisis & impeding the march to peace.”

It is imperative that the terrorist operatives responsible for the planning and execution of the dastardly attack on the airport be held accountable in accordance with international humanitarian law.