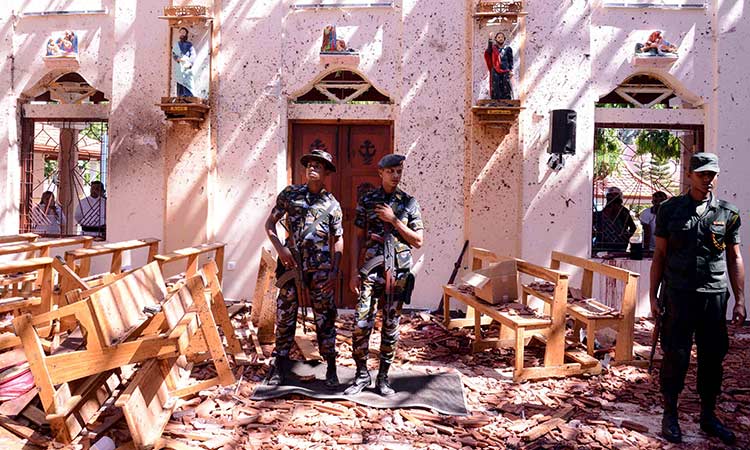 Sri Lankan soldiers look for survivors inside the St Sebastian's Church at Katuwapitiya in Negombo. AFP

The series of devastating bomb blasts that ripped through hotels and churches holding Easter services in Sri Lanka killing or wounding several hundreds of innocent people is an abhorrent, barbaric act that implies the fight against evil mongers needs to be strengthened further.

The dreadful violence violated the sanctity of holy places of worship. Such bloody acts of terror could be avoided by strongly promoting the values of diversity and peaceful coexistence.

The world community should unite more strongly than ever to erase the scourge of terrorism. Countries need to act more vigorously to build partnerships to promote the cherishable values of tolerance and peace.

His Highness Sheikh Mohammed Bin Rashid Al Maktoum, UAE Vice President, Prime Minister and Ruler of Dubai, has echoed the feelings of the entire nation while tweeting: “Terrorists are those who betray worshippers in their places of worship, plant fear in their hearts and try to ignite religious conflicts in societies. Our condolences to the people of Sri Lanka, to the world and to everyone who works tirelessly towards tolerance and coexistence.”

The UAE has always maintained an unequivocal position of denouncing terrorism in all its forms and manifestations regardless of their motivations, justifications and sources.

As the UAE Ministry of Foreign Affairs and International Cooperation stated, the international community needs to close ranks and uproot the scourge of terrorism in order to ensure international peace and security.

Sri Lanka had suffered deadly militant attacks for years, especially by ethnic Tamil militants during a decades-long civil war that ended in 2009 when Sri Lankan forces crushed the insurgency. It had witnessed relative peace during the past decade.

There have been reports that Sri Lanka’s police chief Pujuth Jayasundara had issued an intelligence alert to top officers 10 days ago, warning that suicide bombers planned to hit “prominent churches.” Why did the warning not receive the kind of attention it should have is a question that needs to be answered.

Last year, there were 86 verified incidents of discrimination, threats and violence against Christians, according to the National Christian Evangelical Alliance of Sri Lanka, which represents more than 200 churches and other Christian organisations.

This year, it recorded 26 such incidents, including one in which Buddhist monks allegedly attempted to disrupt a Sunday worship service, with the last one reported on March 25.

In its 2018 report on Sri Lanka’s human rights, the US State Department noted that some Christian groups and churches reported they had been pressured to end worship meetings after authorities classified them as “unauthorised gatherings.”

The perpetrators of the monstrous act in Sri Lanka should be caught at the earliest and punished severely in order to send a strong message to terrorists that there is no safe place for them on earth.