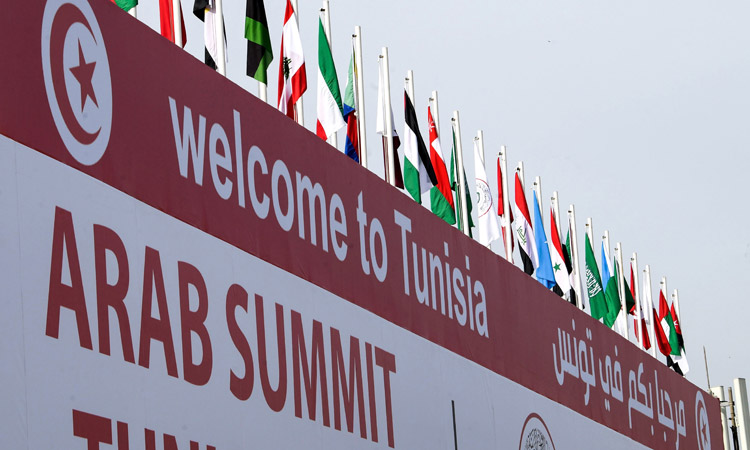 A hoarding of the Arab Summit is on display in Tunis. File/ AFP

US President Donald Trump’s veto of a resolution from Congress and his assertion of support to the Arab Coalition in Yemen is a bold, timely and creditable move.

Trump’s arguments in support of his decision are also legitimate and truthful.

“This resolution is an unnecessary, dangerous attempt to weaken my constitutional authorities, endangering the lives of American citizens and brave service members, both today and in the future,” Trump wrote in explaining his Tuesday veto.

The president has appropriately asserted that the measure would harm bilateral relations and interferes with his constitutional power as commander in chief.

Trump has also lucidly highlighted the exact situation on the ground in Yemen by stating: “Houthis, supported by Iran, have used missiles, armed drones and explosive boats to attack civilian and military targets in those coalition countries, including areas frequented by American citizens, such as the airport in Riyadh, Saudi Arabia. In addition, the conflict in Yemen represents a ‘cheap’ and inexpensive way for Iran to cause trouble for the United States and for our ally, Saudi Arabia.”

The UAE, on its part, has been continuously engaged in providing relief assistance and supporting the Yemeni people so as to alleviate the dire humanitarian conditions prevailing there.

UAE Minister of State for Foreign Affairs, Dr Anwar Gargash’s tweet highlights the UAE stand clearly: “President Trump’s assertion of support to the Arab Coalition in Yemen is a positive signal of US resolve towards America’s allies. Common strategic interests are best served with this clear commitment.”

Gargash has made it clear that the Coalition continues to work without interruption to support peace through the UN led Stockholm Agreement and its commitment to the humanitarian and political dimensions of the Yemen crisis remains unshakable.

Gargash had earlier stated that through deep cooperation on joint security priorities, the UAE and the US are working together to address Iran’s destabilising role in the region and defeat extremism, and also that the  UAE’s partnership with the US is grounded in a shared outlook for a more peaceful, prosperous Middle East region.

It should not be forgotten that since 2015, the UAE has provided as much as $5.41 billion in assistance to Yemen, reaching out to some 17.2 million individuals, including 11.2 million children.

The constant support being provided in all fields reflects the deep ties between the UAE and Yemeni people. The Emirates Red Crescent too deserves a salute for doing yeoman service in Yemen by carrying out several humanitarian services and development projects.

The UAE has also been playing a major role in demining and removing explosives placed by the Houthi militias in the liberated areas.

The UAE Armed Forces have conducted three operations to liberate regions from the Houthis, as well as demined them and provided their residents with humanitarian aid. Emirati engineering teams have already removed many thousands of mines and deactivated them.

“In a turbulent and dangerous region, the UAE is unwavering in its commitment to the core values of stability, tolerance and peaceful coexistence. These principles have guided the UAE since its founding nearly 48 years ago,” as Dr Gargash well pointed out earlier.